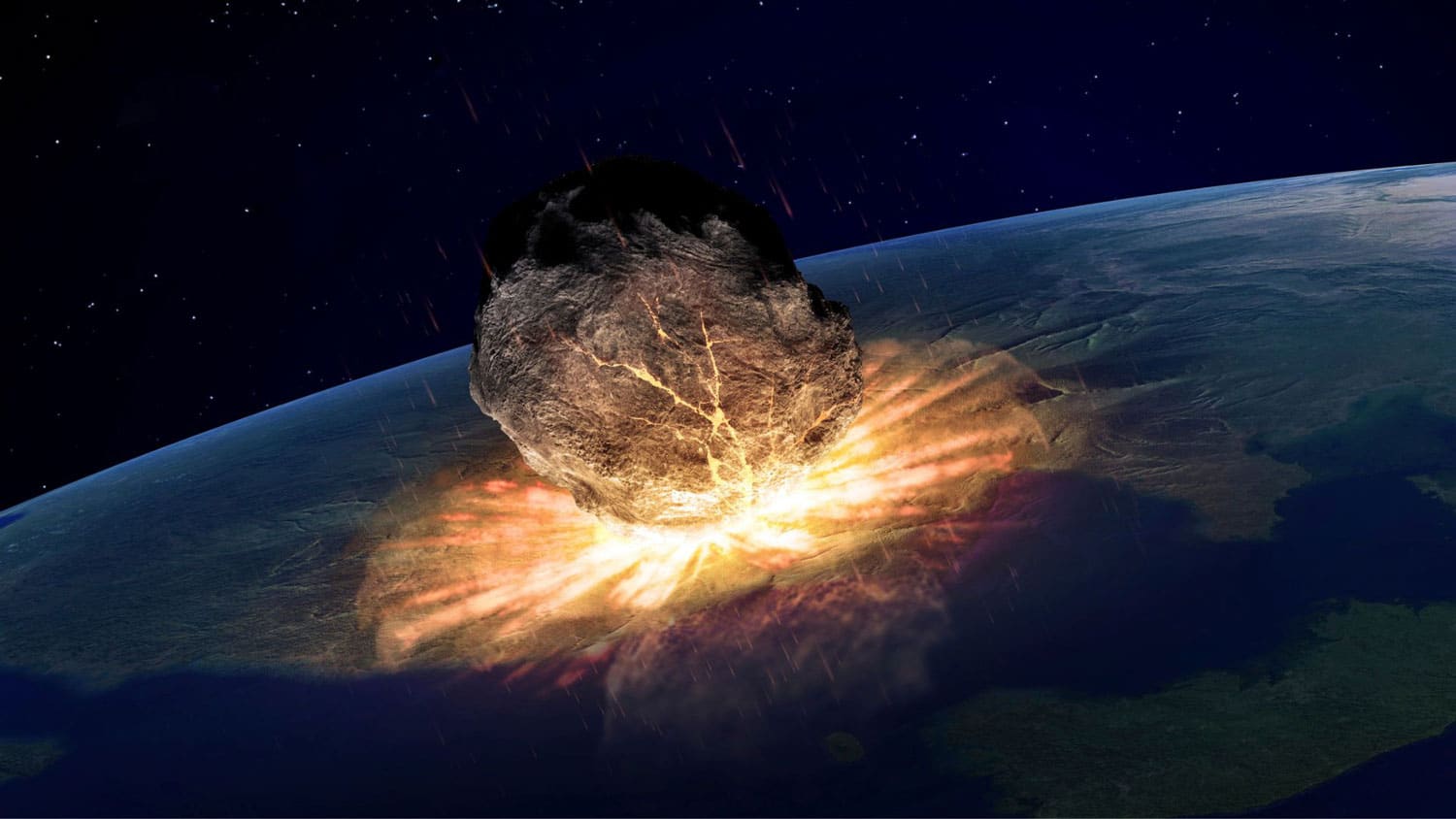 Using seismic measurements, scientists have found evidence of an asteroid impact crater beneath the North Atlantic Ocean. According to scientists, this crater must have been formed by an asteroid impact around 66 million years ago. During the same time that the Chicxulub asteroid hit Earth off the coast of today’s Yucatan, Mexico, and wiped out the dinosaurs.

The crater is about 5 miles in diameter. Scientists have named it Nadir crater. It is buried up to 1,300 feet below the seabed about 250 miles off Guinea, West Africa coast.

Scientists believe that the asteroid that created the newly discovered Nadir crater could have been formed by the breakup of a parent asteroid or by a swarm of asteroids in that time period. If confirmed, the crater will be one of less than 20 confirmed marine impact craters on Earth.

Scientists used computer simulations to determine what kind of collision took place and what the effects might have been. According to the simulations, a 1,300-foot-wide asteroid colliding with a body of water between 1,600 and 2,600 feet deep created the crater.

Veronica Bray, a research scientist in the University of Arizona Lunar and Planetary Laboratory, said, “This would have generated a tsunami over 3,000 feet high, as well as an earthquake of more than magnitude 6.5. Although it is much smaller than the global cataclysm of the Chicxulub impact, Nadir will have contributed significantly to the local devastation. And if we have found one ‘sibling’ to Chicxulub, it opens the question: Are there others?”

The asteroid’s estimated size would place it on par with asteroid Bennu, the object of the NASA asteroid sample return mission OSIRIS-REx, which the University of Arizona is directing. According to Bray’s estimates, the tsunami brought on by the underwater eruption of the Hunga Tonga-Hunga Ha’apai volcano in the Polynesian nation of Tonga on January 15 would have been about 1,000 times smaller than the energy released from the impact that created the Nadir crater.

Bray said, “These are preliminary simulations and need to be refined when we get more data, but they provide important new insights into the possible ocean depths in this area at the time of impact.”

Uisdean Nicholson, a geologist at Heriot-Watt University in Edinburgh, discovered the crater somewhat by accident while examining seismic reflection data from the seabed during a research project dedicated to seafloor spreading, the geological process that caused the African and American continents to drift apart, thereby opening the Atlantic Ocean.

“I’ve interpreted lots of seismic data in my time but had never seen anything like this. Instead of the flat sedimentary sequences, I was expecting on the plateau, I found an 8.5-kilometer depression under the seabed, with very unusual characteristics. It has particular features that point to a meteor impact crater. It has a raised rim and a prominent central uplift, consistent for large impact craters.”

“It also has what looks like ejecta outside the crater, with very chaotic sedimentary deposits extending for tens of kilometers outside the crater. The characteristics are just not consistent with other crater-forming processes like salt withdrawal or the collapse of a volcano.”

Study co-author Sean Gulick, an impact expert at the University of Texas at Austin, said, “The Nadir Crater is a fascinating discovery of a second impact close to the Cretaceous-Paleogene extinction. While much smaller than the extinction causing Chicxulub impactor, its very existence requires us to investigate the possibility of an impact cluster in the latest Cretaceous.”

“While the seismic data indicate that the sediments impacted by the asteroid correspond with the Cretaceous-Paleogene boundary – a sedimentary layer demarcating the end of the Cretaceous period and last known occurrence of dinosaurs – there is some uncertainty about the precise time of impact, limited by the resolution of the data.”

“Despite 4 billion years of impactors hitting Earth, only 200 have been discovered. It is thus exciting news whenever a new potential impact is discovered, especially in the hard-to-explore marine environment.”