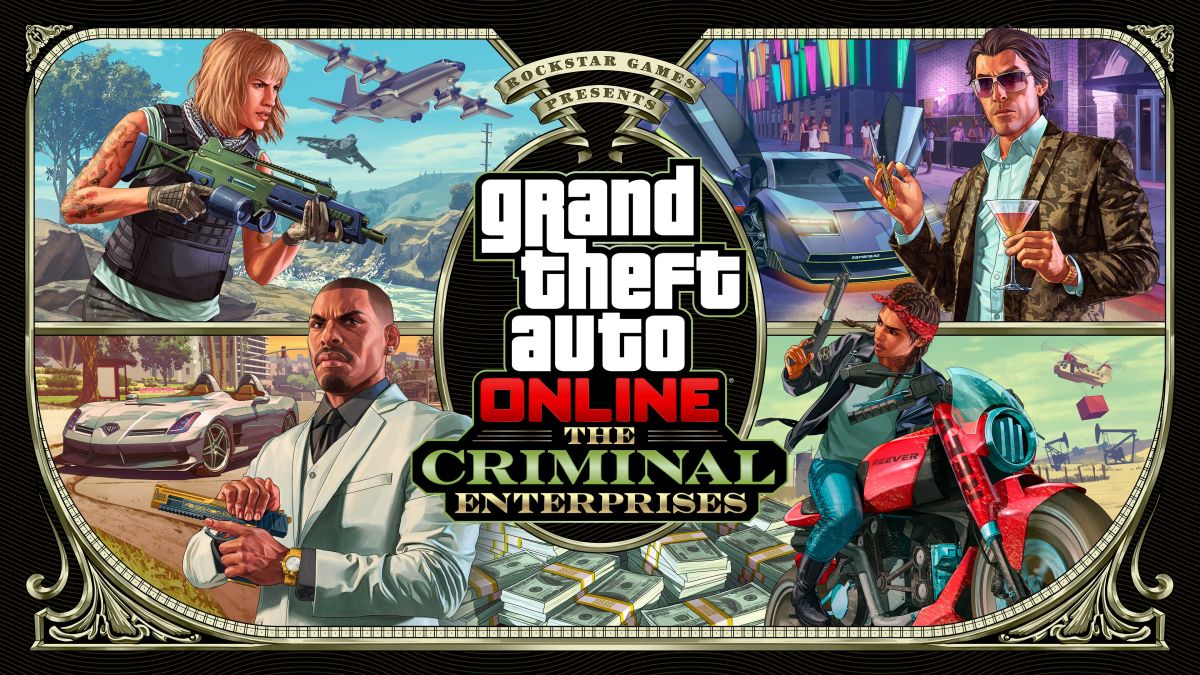 The GTA Online The Criminal Enterprises update is arriving on July 26, and it promises to deliver one of the biggest shakeups to the online world in recent times. Rockstar has been gathering players’ feedback from their GTA Online experiences for some time now, and this update promises to resolve some of the persistent issues that have been encountered, as well as making the game more accessible for new players while still keeping things interesting for the veterans. We’ve reviewed the information available so far, to bring you this round up the biggest changes with the GTA Online The Criminal Enterprises update.

Don’t worry if you haven’t upgraded to the latest console yet, as the GTA Online The Criminal Enterprises update will be available on PS4 and Xbox One, as well as PC, PS5, and Xbox Series X. It’s possible that some of the content added will be exclusive to new-gen consoles, although the only mention of this restriction so far is for a fresh ride from GTA Online Hao’s Special Works.

The Oppressor Mk II is finally getting nerfed

If you’ve been fed up with other players constantly trolling you with the Oppressor Mk II flying motorcycle, then help is at hand with the GTA Online The Criminal Enterprises update. Not only will the effectiveness of the homing missiles fired by this vehicle be reduced, but this bike will also have fewer countermeasures uses available with longer cooldowns between them. As a general improvement to reduce griefing, players’ Kill/Death ratio will no longer be affected by kills in Freemode, and will only be changed by actions in competitive modes after the update.

Using armor and snacks in combat will be much easier

A big issue for a lot of players has been the time and effort it takes to apply fresh body armor or consume snacks to restore health, as it’s often impractical to scroll through several menus to do this in the middle of a heated firefight. The GTA Online The Criminal Enterprises update is addressing this by adding several new quick actions when you bring up the weapon wheel, so you can eat a snack or use armor on the fly without breaking your flow. There will also be an option to buy full ammo for all weapons through the Interaction Menu, and if you fail then Quick Restart a mission then your snacks will be restocked to the level you started the mission with so you don’t run out.

One of the biggest additions with the GTA Online The Criminal Enterprises update is the addition of new Contact Missions, which allow you to become a special IAA field operative and investigate a criminal conspiracy around rigged gas prices. This will initiate Operation Paper Trail, with a series of missions for one to four players as you look into the affairs of petrochemical magnates, The Duggans.

More new vehicles are on the way

The Criminal Enterprises update promises that we’ll be receiving plenty of GTA Online new cars through the summer and beyond, including two Imani Tech compatible vehicles for customization at the Agency, as well as new Tuners vehicles and a ride from Hao that will be exclusive to new-gen console players. You’ll need some extra space for all of these fresh cars, so it’s handy that the number of ownable properties is being increased from 8 to 10, which potentially provides up to 20 new garage slots for your vehicles.

If you’d rather take on Business activities at your own pace or with friends, then the GTA Online The Criminal Enterprises update will let you register as a VIP, CEO, or MC President in Invite Only, Crew, and Friend Sessions for the first with that. This means you can complete Sell Missions and any other activities without outside interference, however there are now increased bonuses for players who continue to sell their goods in Public Sessions to reflect the additional risk.

Payouts are increasing across the board

If you’re trying to find out how to make money fast in GTA Online, then The Criminal Enterprises update will help with that thanks to increased payout across a wide range of activities. Races will pay out 50% more GTA$ on average, while Adversary Modes will also receive an average boost of 50% to payouts. Heists will also become much more lucrative, with reduced setup fees and an additional 50% to 75% awarded on top of the Heist Finale payouts.