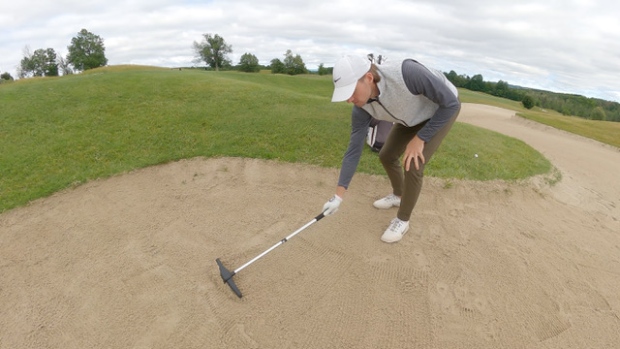 As with so many new products in golf, necessity was a driving factor for the Canadian inventors behind two innovations who hope their creations will find their ways into golf bags and carts this season.

Both the Clean Flight Golf ball washer and the Rake Caddy bunker rake were driven by changes to the game caused by the pandemic but have plenty of staying power to remain as the rules ease.

The Clean Flight Golf ball washer is a portable unit that allows players to get the dirt off their golf balls anywhere, at any time.

For as long as most players can remember, ball washers have been a fixture on the tees at many clubs. Your ball got dirty, you popped it into the insert in the handle, dropped it down into the water between the scrub brushes, and moved it up and down to get a clean golf ball.

That is, of course, as long as the units weren’t dry or didn’t smell as if they hadn’t been cleaned out in eons.

During the pandemic, most golf clubs removed ball washers, seeing them as a possible danger of transmission. A wet towel was all that was left.

At least, it was until Peter Bohlender and his friends came up with the idea for a portable ball washer. Together, the group created the Clean Flight Golf portable unit. It looks like a travel coffee mug, fits into the cup holder on your cart or clip to your bag, and operates just like a traditional unit.

“It does everything a golf ball washer, but it travels with you everywhere,” Bohlender said.

So far, the reaction has been positive. There have been sales across Canada and the United States, with some now coming in from Australia. Orders have come from four more countries as word of the unit spreads.

The concept for the device came when Bohlender and his pals were playing on a course that doing some construction. That left a lot of mud that seemed to find its way onto the balls. With the regular ball washers gone, it was every player for himself in how to get the golf balls clean. That provided the genesis for the product.

While some players have always used a towel, Bohlender said most of his friends preferred the heavy-duty scrub that came with the red-headed washers.

The Clean Flight Golf product does just that with a quick and easy scrub. Unscrew the lid, pop the ball into the slot and scrub it up and down. A bottle of cleaning agent is provided with each unit. As well, it’s more sanitary than the communal units that are returning to courses and no more waiting until the next tee to get a deep clean – the unit goes everywhere the players do.

The Clean Flight Golf units are sold in numerous pro shops, but most purchases so far are online from the company’s web site or via Amazon.

“So far, most of our sales are by word of mouth from satisfied customers,” Bohlender said. “Once people see it in use, they come to us looking for one for themselves.”

There’s been a similar reaction to the Rake Caddy, a personal bunker rake with an innovative design that lets players carry it unobtrusively in their bag.

Ryan Curran, a golf professional, and Michael White, co-founder of the company, got together after a round of golf where Curran’s ball ended up in a footprint in a bunker. It was a frustrating experience caused by the removal of rakes on most courses during the pandemic.

“I know this sounds like a cliché, but he sketched out his idea on a napkin,” chuckled White of Curran’s design. “And then he was smart enough to get it patented.”

Each unit has an extendable handle, and the head features a pop-up mechanism that springs the two sides of the head out to usable width. It works just as easily in reverse.

The Rake Caddy, which is made in BC, is durable and will smooth out any mess in the sand, a process the founders have dubbed “sandscaping.”

While regular bunker rakes have made a return to many golf courses in recent months, White believes the Rake Caddy is still a better option for golfers.

“How many times do you hit it in the bunker and the rake is at the opposite end of where you are?” he stated. “This can really save time. You don’t have to go wandering around to find the rake. It’s also a lot more sanitary. ”

It could potentially also save money courses if they choose to eliminate rakes altogether. The cost of buying new rakes as well as the time it takes a worker to move all the rakes during the mowing process can be negated through the use of the Rake Caddy.

So far, the reaction has been positive. On display at the 2021 PGA Merchandise show, the Rake Caddy won the Innovator Spotlight Pinnacle Award for its design and practicality. The rakes can also be created with company logos printed on them, making them attractive as a tournament gift.

Up to this point, most sales have been through the company’s website although Curran and White are gradually contacting retail stores and pro shops.

Playing golf was one of the most popular activities during COVID-19, a safe haven that allowed people to get outside. If these two products are any indication, it’s also led to new ideas that may improve the golfing experience.