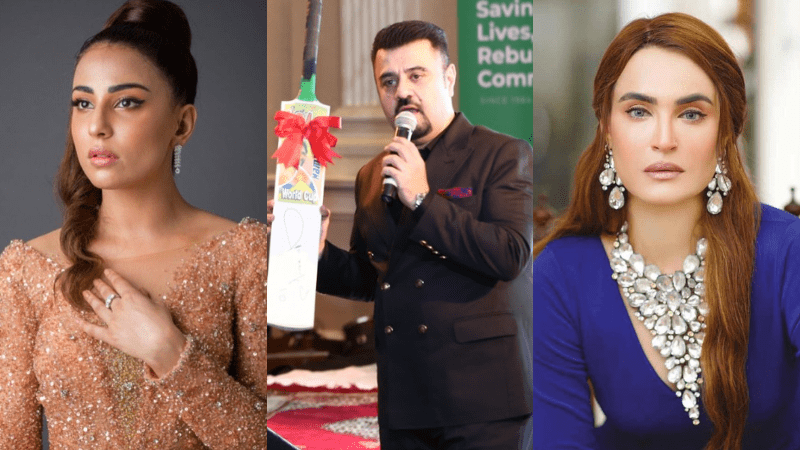 If you’ve been keeping up with your favorite celebrities, you’ve probably noticed that most of them have been catching flights to Toronto, Canada to attend the annual HUM Awards. But while people usually love seeing celebs’ travel pictures, this time, their adventures weren’t appreciated by their followers who criticized them for attending the event instead of helping people affected by the floods in Pakistan. Several celebrities are now speaking up in their defense and the defense of their colleagues.

Ushna Shah issued a statement saying that a good amount of the proceeds from the event will be donated for flood relief whereas Ahmed Ali Butt, Zhalay Sarhadi, Mariyam Nafees and model Nadia Hussain defended those in attendance, saying they are just doing “their job” .

On Thursday, Hubs actor Shah took to Twitter where she shared her statement. In it, she wrote, “It’s quite disconcerting to read the criticism for those of us who have come to Toronto to attend the award show. It is imperative that those affected by the floods know that they are not forgotten and we are working on channels to raise funds through our industry.”

Shah said that she can vouch for herself and other artists when she says that everyone has contributed to the relief funds “privately” and continues to do so. As far as attending an award show is concerned, she wrote that 50 per cent of the revenue of this sold out show goes to the families affected by the floods for which they also took part in a fundraiser in Canada. She later corrected herself to say that her figure of 50pc was incorrect.

The actor said she hopes to continue doing her part after returning to the country as the rehabilitation of fellow citizens after this “horrific disaster” is a collective responsibility. “We must also shed international light on the effects of climate change which has affected Pakistan the most,” she wrote.

Actor and singer Ahmed Ali Butt took to his Instagram stories and mocked Angelina Jolie’s visit to Pakistan. “Since everyone is in [awe] of Angi baji visiting for three days, and how dare us Pakistani celebrities flew to Toronto to PARTY? By party you mean doing a fundraising dinner for flood relief which is sold out and by doing a SOLD OUT award show in advance, of which a percentage will go to the flood victims again,” he wrote.

Expressing his disappointment, he added that despite their efforts, people would praise Jolie instead of them. “Keya karain humain Sharmila… I mean sharam nahi aati [what to do, Sharmila.. I mean, we don’t feel ashamed]. But thanks for being supportive as always towards your entertainment industry (sarcasm),” he wrote, taking a dig at PPP leader Sharmila Faruqi who went after the celebrities attending the award show.

Model Nadia Hussain questioned why people forget that any international celebrity coming to Pakistan is not coming on their own “but to represent an international charity organization”.

She requested people not to point fingers at anyone and instead look at the four fingers pointing back at them, four times questioning whether they have done their part or not. “All of us doing whatever we can is still less for the affected!!! Let’s just keep doing what we ourselves can and not question anyone else,” wrote the model.

Actors Mariyam Nafees and Zhalay Sarhadi also jumped in to defend their fellow entertainment industry stars. Nafees took to Twitter and retweeted a person criticizing the celebrities who had gone to Canada. She wrote,Kya [what] etc etc? Me and my husband personally went. Hadiqa Kiani is on the ground. Resham ji went. The celebs donated SO MUCH that ya’ll know nothing about. Publish karo to masla na karho to masla [if we publish there’s an issue if we don’t then too there’s an issue]. You do you!”

The Diyar-e-Dil star also wrote that there’s nothing to prove to anyone and that the “government owes it to the people” to work for their benefit. Taking the conversation to Instagram, Nafees questioned the people and requested them to stop “attacking the celebs” and to start working themselves. “Baatein karna ember asaan hi [It’s easy to talk], get to work! Flood victims need EVERYBODY,” she wrote.

Sarhadi shared a photo of herself talking to people and wrote that people in the affected areas “need your help and focus the most!” She exclaimed that this is where people are needed, not on social media “slamming people” they think are not doing what they ought to do. “Un kay aamaal unkay haain aap kay aamal aap kay [Their actions are theirs, your actions are yours],” Sarhadi wrote with the hashtag #bebetter.

Meanwhile. HUM TV held a fundraising gala in Toronto in order to raise funds for relief and rehabilitation efforts.

All proceeds from the gala night, auction of cricket items as well as designer clothes will go to the relief and rehabilitation efforts in the flood affected regions of the country, according to the network.

Pakistan has so far suffered damage of about $10 billion, with 33 million people affected and displaced. Here is an extensive list of organizations accepting donations and working to help people affected by the floods.