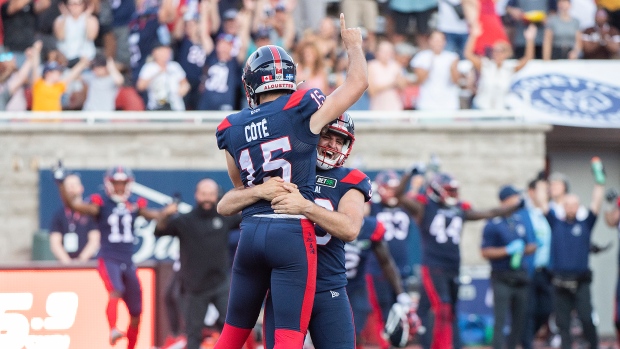 MONTREAL — In his second season in the Canadian Football League, David Cote has had few opportunities to kick a game-winning field goal.

Saturday afternoon against the Hamilton Tiger-Cats, the Montreal Alouettes’ kicker got his opportunity on the final play of the game — playing at home in front of 20,048 onlookers at Percival Molson Stadium.

The Tiger-Cats (3-7) had pulled away with 14 points in the third quarter, but the scrappy Alouettes (4-6) regained the lead with 2:18 to go in the game. The Hamilton kicker Seth Small connected on a late 53-yard field goal setting the stage for Cote’s late heroics.

The Als’ kicker closed the deal with a 48-yard field goal as time expired and his teammates stormed the field in celebration.

“A lot of hits on the head and people jumping around, I didn’t know where I was but it was really nice,” said Cote, describing the post-game feeling. “All the guys come on the field, we’re all really happy obviously and the crowd, too. They made a huge difference and we heard it at the end, it was very loud.”

“I hadn’t felt that energy, that electricity in the stadium since, I don’t know, maybe the last time I was here like in 1999 and 2000 with (Anthony Calvillo) and Mike Pringle and Ben (Cahoon),” said coach Danny Maciocia. “There was a lot of energy and the players fed off of it.”

The Alouettes were as pleased as their crowd with the final result, a crucial one at the midway point of the season.

Montreal kicked off a four-game home stint with their first back-to-back wins of the year and are now 2-2 at Percival Molson Stadium. With the win, the Alouettes still have control over their tiebreak with the Ticats and remain in contention for a top-two spot in the East Division that could earn them a home Eastern Conference playoff game.

“First, we all know all the East games now are huge for all teams in the East, so we know how critical it is,” said Eugene Lewis. “We know the situation that we’re in. We know that our future is determined by us and how we go out there and play and the things that we do.”

On the other side of the gridiron, the Tiger-Cats were rejected by the setback. Seconds from what could have been their first road win and first back-to-back wins, they fell to 0-5 away from home.

“It’s just tough, it was one of those games,” said Ticats’ head coach Orlondo Steinauer. “We had an opportunity to hold them there. I’m proud of the way we battled but we had opportunities, I believe, but in all three phases and ultimately down on defense to hold them to at least a longer opportunity and it didn’t happen.”

“We had the whole game in front of us, we had the lead with how many seconds left and we didn’t come through.”

Lewis stressed that the Alouettes need to “be more disciplined” in order to win consistently. Montreal was caught twice for roughing the kicker on punt situations, giving the ball back to the Tiger-Cats.

“We’re getting better, we’re a better team. I’m not gonna say: ‘We’re the best team, we’re a great team,’ yet,” Lewis said. “We’re a team that’s getting better. I have faith in this team and we found ways to win these last two weeks and now we have to keep doing that.”

The Tiger-Cats grabbed an early lead when Shiltz found White with a 10-yard pass. White was tackled but stretched his arm to get the football past the goal line.

The Alouettes tried to respond with a touchdown on the next drive but were stopped in the red zone by the Hamilton defense. Cote kicked his first field goal of the game.

The Alouettes took their first lead of the game when Harris found Eugene Lewis with a 23-yard pass. Both players combined for the two-point conversion putting the Alouettes ahead 11-8.

Small converted a 13-yard field goal to level the score at 11-11 by halftime.

Kaion Julien-Grant single-handedly regained Montreal’s lead in the third quarter. The receiver caught Harris’s pass in the backfield and swerved his way for 54 yards and into the end zone.

A defensive pass interference by Alouettes’ cornerback Mike Jones brought Hamilton to the one-yard line. Jamie Newman made the QB sneak to tie the game once again.

The Ticats added another touchdown to end the third quarter. Shiltz passed to White who made his way through the Montreal defense for a 64-yard touchdown play.

Montreal regained the lead with 2:18 to go in the game. Harris threw to Reggie White Jr. for a 45-yard touchdown. Cote added the one-point conversion to lift Montreal up 26-25.

YARDSTICKS: Montreal receiver Tyson Philpot fell heavily after a tackle in the second quarter. The rookie did not return to the game in the second half and entered the concussion protocol.

This report by The Canadian Press was first published Aug. 20, 2022.