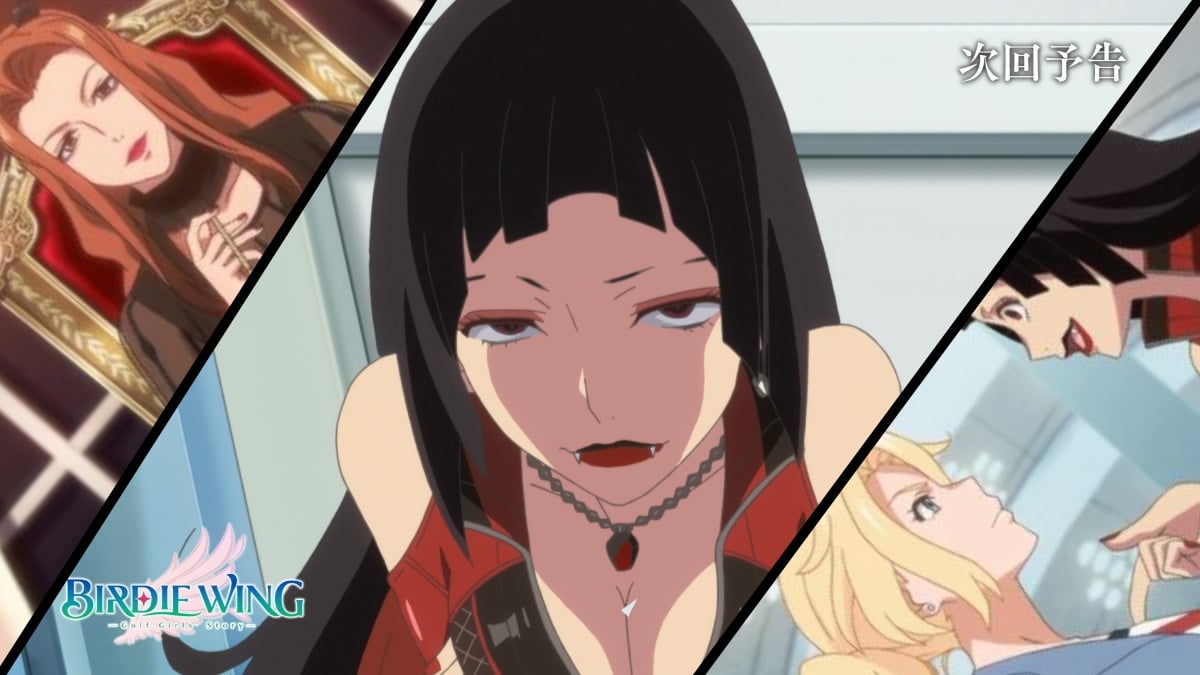 Spoilers for Birdie Wing: Golf Girls’ Story up to episode 4

As a sports anime enthusiast, I was instantly charmed by how unapologetically ridiculous the first episode of Birdie Wing: Golf Girls’ Story was. Our main character, Eve (no last name), participates in shady golf matches to make money for a group of children who live in a bar. The owner of said bar is harassed by corrupt police officers, the entire group (Eve included) living in the “bad part of town.” To Eve, golf is just a way to make money, but she’s soon charmed by Aoi Amawashi, a golfing ace who plays for the love of the game and not for hustling folks out of money.

With that over-the-top story comes all of the sports anime tropes I adore. Eve smacks the ball with shonen anime-style power shots complete with rainbow-colored visuals and an enthusiastic saxophone from a retro anime. However, the series begins to settle down a little as it builds up the rivalry between Eve and Aoi.

At least. That’s what I thought. Until episode four.

The story so far

After Eve loses to Aoi in their match, she quietly admits that her time with the golf prodigy is the most fun she’s ever had playing the game. Clearly affected by the sapphic vibes from Aoi’s smile piercing her heart (yes, the piercing smile is a quote from the anime), Eve is determined to face her in a proper 18-hole game.

I promise you, I’m not making up the sapphic vibes, this series bathes in them with every episode.

Well, Birdie Wing is a yuri anime now. You’re not going to convince me otherwise. pic.twitter.com/5HoRB988mZ

Since Aoi is in the middle of the U15 Women’s Championship, the only way Eve can face her is if she enters the tournament, too. With a little help from an absolute “step on me” woman named Rose, Eve’s able to compete thanks to Rose’s connections to the tournament’s main sponsor, a woman named Catherine. This comes at a price, of course, but Eve doesn’t need to know that… yet.

Technically, Eve and Aoi aren’t in the same golf group in the tournament, so they aren’t competing directly against each other… except they ARE, because they only care about each other’s scores. We actually get an interesting explanation about how Eve plays in a way that rattles her competitors because she uses brute force and takes a lot of risks. This causes her competitors to try and take the same gamble she does, but it never works out for them. Aoi, however, continues to play golf her way, which is to have fun (lol SK8 taught us all about that).

At the end of the third episode, it looks like Aoi is set to beat Eve as far as getting the better score in the tournament, but Rose has other plans.

What’s that about the mafia?

Unbeknownst to Eve, Rose used underhanded methods to make Aoi mess up her final shot. This is because she wants Eve to be at her best for the game she has coming up, aka, the price Eve has to pay for getting put in the tournament. Eve now has to take part in a mafia turf war where a golf match will decide who gets a particular plot of land.

Rose explains to Eve (who is blindfolded so she can’t see the hidden underground golf course – no, I’m not kidding) that Catherine is the CEO of a real estate company… who just so happens to have mafia ties. She’s currently fighting with another mafia boss over a plot of land, and they’ve decided to settle things with a game of golf. It turns out Catherine has a secret underground facility that has an extremely high-tech golf course for such a situation (and to make money off of the 1% who bet on matches here).

But hey, maybe you’re jaded and “secret mafia golf wars” does nothing for you.

May I raise you: secret underground entire golf course only accessible via elevator that the mafia uses to stage said golf wars? pic.twitter.com/bTJafFgDtg

Neither Catherine nor the other mafia boss (Mr. Nicolas) is golfing themselves, of course. That’s what Eve is there for. Eve is going to golf for Catherine while a woman named (giggle snort) Vipère the Reaper will be golfing for Mr. Nicolas. Vipère is well known in underground golf circles. What her opponents don’t know is that she emits poison when she zips down her outfit for maximum cleavage, snake tattoo, and bondage visuals.

episode 4 of Birdie Wing is the most unhinged exultation of trash lesbian camp I’ve seen out of anime in years. it’s beautiful pic.twitter.com/JXRRi2Fk0j

Anyway, Birdie Wing: Golf Girls’ Story is pure “what did I just watch” anime goodness that continues to top itself in the silliness it embraces. Just when you think you’re getting a normal “I didn’t think much of this game until I met you” sports anime, the literal mafia shows up with a snake woman who flashes her tongue like she’s cosplaying Orochimaru from Naruto. Truth be told, I’d planned on maybe waiting for the anime to finish before watching more episodes, but when you see tweets about secret underground mafia golf courses, you kinda have to see that shit for yourself.

You can check out Birdie Wing: Golf Girls’ Story over at Crunchyroll!

—The Mary Sue has a strict comment policy that forbids, but is not limited to, personal insults toward anyonehate speech, and trolling.—

Have a tip we should know? [email protected]