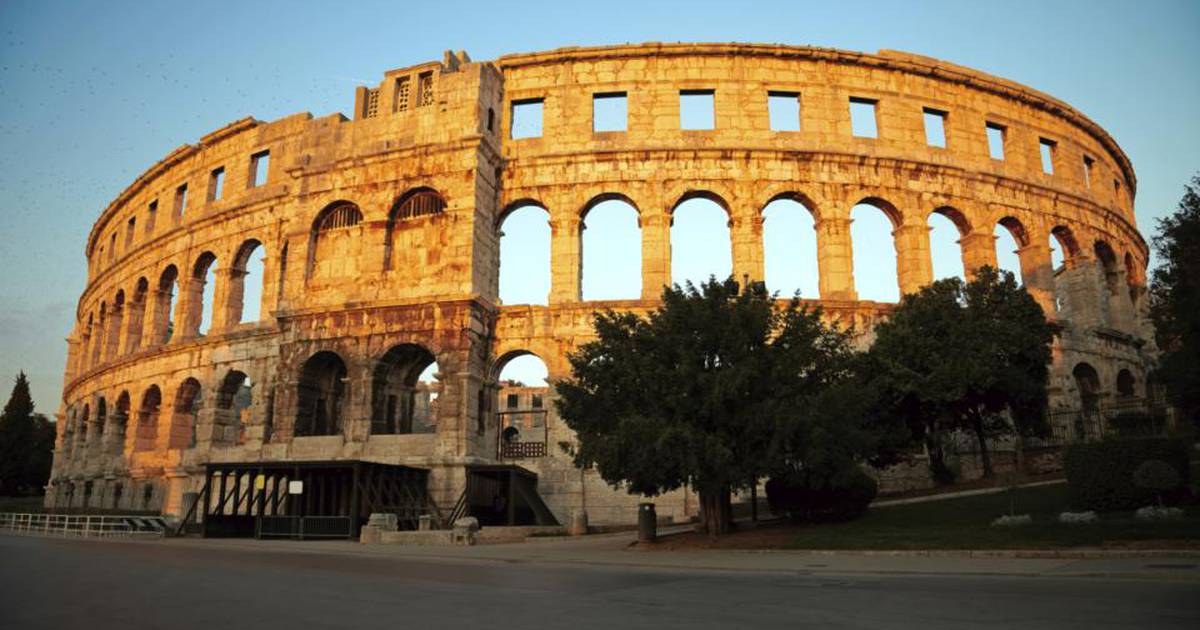 A statue of a reclining James Joyce faces the triumphal arch at Pula in Croatia, known as the Arch of Sergii. A 23-year-old Joyce spent his first six months in exile here. When a teaching job at the Berlitz in Trieste failed to materialise, he headed south to Pula with pregnant Nora. Young Joyce wrote fondly of the cafes here, like the one under the school he taught in, where his relaxed effigy sits gazing towards the Roman arch. Up the road is one of the world’s best preserved Roman amphitheatres.

Earlier in the week, up-and-coming Irish band Inhaler supported the world-conquering Arctic Monkeys, underscoring yet again why Croatia is such a vibrant summer destination. Where else would you get that – Roman ruins providing the backdrop for a contemporary gig?

Rome was unusual economically in that the city itself produced almost nothing, could not feed itself and ran on a system of credit which would not seem alien to us today

It is easy to forget that the Roman Empire flourished all around the western Adriatic in what is now Croatia. Indeed, the Roman and later Italian legacy is captured in the fact that this part of northern Croatia is officially bilingual: Croatian and Italian. The inscription on the Arch of Sergii reads “SALVIA POSTUMA SERGI DE SUA PECUNIA” meaning this arch was paid for by Salvia, wife of Sergii, with her own money. This detail about who paid underlines the importance of money in the Roman Empire.

Rome was unusual economically in that the city itself produced almost nothing, could not feed itself and ran on a system of credit which would not seem alien to us today. Central to the system of credit was a monetary union which bound this vast empire together, with Roman territories from western Syria to southern Scotland using the same currency. Like today’s EU, where the single-currency euro is a critical political as well as monetary instrument, the Roman denarii gelled the empire together, as traders in Antioch, miners in Spain and soldiers on the German frontier at Aachen in the Rhineland used the same coins, with the same rate of interest, the same banking rules and ultimately belonged to the same globalized Roman economy.

Later this year, Croatia will join the euro. This is one more step on the journey that has seen the country move away from the historic Yugoslav/Balkan orbit and back towards central Europe. While the politics and geopolitics of this move are understandable, the macroeconomics are a bit more complicated. The similarities and contrasts between Croatia and Ireland are fascinating – and consequential. Simply put, the Irish economy has been booming for the past five years on almost every metric, implying that our exchange rate is undervalued. Such an economy normally requires the exchange rate to rise to take the heat out. When this is impossible, we get asset price surges, price rises, full employment, buckets of tax revenue, immigration and an economy where supply finds it hard to keep up with demand.

Despite a strong post-pandemic recovery, the Croatian economy has been stagnant at best, implying that, among other things, the exchange rate is overvalued. Such an economy needs to expand, which requires a much weaker exchange rate to stimulate growth, investment and employment. An overvalued exchange rate stymies growth, the elixir of all social progress. “Locking in” an overvalued exchange rate by joining the euro at a higher level than is sensible for the weak local economy implies continued stagnant growth, little or no investment, higher levels of unemployment and emigration, and ultimately lower incomes.

The latest data shows Croatia running a constant budget deficit, a large and widening trade deficit, a current account deficit and a rising national debt to income ratio. In tandem, emigration of young Croats is an ongoing topic of conversation. For example, figures published for 2021 show that Ireland has issued 32,000 PPS numbers to Croats. As they approach the adoption of the euro, many locals and even more tourists are complaining that the country has become extremely expensive.

Obviously, inflation is a key topic; however, a country that is the most tourist-dependent in the EU needs to offer value, and an overvalued exchange rate prevents this. In addition, tourism is highly labor-intensive and offers few opportunities for productivity growth. Countries do not, in the aggregate, get rich from tourism, but they do become seasonal.

It is not clear that this type of economy should have the same exchange rate as Germany, or Ireland for that matter. People forget that Ireland devalued its currency six times against Germany from 1980 to 1993 in order to get into competitive shape for the subsequent growth from the 1990s to now. Part but not all of the story was these devaluations, allowing industry to be competitive, at least initially.

Devaluations mean incomes go down relative to foreigners but this change in prices allows a country to earn a higher standard of living over time, precisely what Ireland did. Obviously, there were lots of other things going on in the background, but the key price of any country is the exchange rate: get that wrong and the economy has to work much harder to attain higher income. An economy that is borrowing all the time, with an exchange rate tied to much stronger economies, is renting its standards of living not earning them.

Now look at Ireland. In an ideal world, as house prices continue to rise and investment flows in, leading to local overheating, the Central Bank would allow the exchange rate to rise, dampening things down. National interest rates would also rise as national inflation outpaces wages. Higher interest rates blow the froth off the housing market, bringing down prices while the higher exchange rate moderates investment flow as the country becomes more expensive. All this allows the economy to adjust more quickly and easily to the disparity between booming demand and rigid supply.

We should have much higher interest rates and much stronger exchange rates, but because we are in the euro our interest rates and exchange rates are a blend of conditions all over Europe, combining the outliers of strong and weak. The implication for Ireland is more money cascading into the economy, more opportunity, more immigration, higher wages and prices, and higher house prices. We overheat. Economists call this the “real economy” as opposed to the monetary economy adjusting.

In contrast, a country like Croatia – and before it Greece and perennially Italy – suffers weaker growth, higher debt levels and periodic bond crises as investors question whether they can keep paying debts from lower incomes. The European Central Bank might conjure up ways of militating against bond crises, but the underlying economic dilemmas do not evaporate, they exacerbate.

Interestingly, the monetary history of the Roman Empire was characterized by repetitive credit crises, one of the most debilitating ones coming in 34AD about a year after the crucifixion of Jesus Christ and about 40 years after Pula’s arch was built. One wonders did ancient Salvia’s wealth survive that crisis? Economic history has a habit of reminding us how the world works. Are we paying attention?