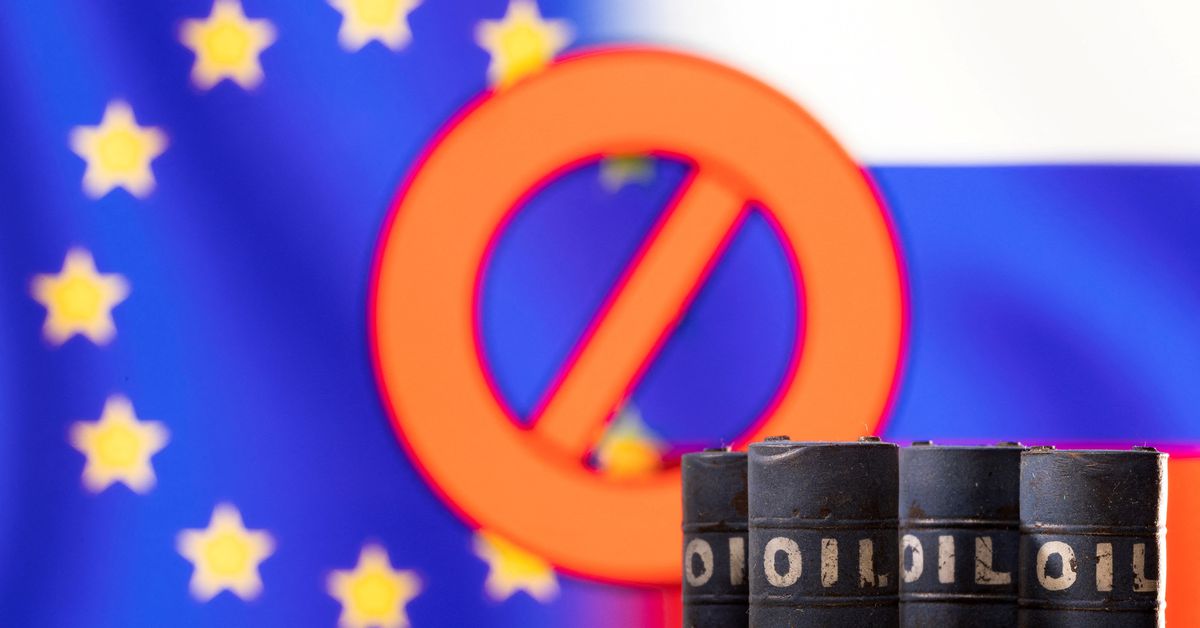 Models of oil barrels are seen in front of the displayed sign “stop”, EU and Russia flag colors in this illustration taken March 8, 2022. REUTERS/Dado Ruvic/Illustration

MOSCOW, Sept 23 (Reuters) – Russia has ramped up oil shipments to Asia since Europe imposed sweeping sanctions, but still needs to re-route over a quarter of its crude exports away from Europe – or about 1.3 million barrels per day – when a full oil embargo hits in December. Russia exports around 20 million tons of crude per month – roughly five million barrels per day (bpd) – via several routes, including the Druzhba pipeline to Europe and others to Asia.

In August, Russia’s total exports via European ports and the Druzhba pipeline amounted to 12.05 million tonnes, of which around 5.5 million tonnes (1.3 million bpd) were shipped to countries that will stop importing Russian oil from Dec. 5.

Russia has to find new buyers for that crude, which could require cheap prices and special terms, while also facing costlier logistics to deliver to more remote destinations, traders said.

“Russian Urals oil has always been a grade for Europe. Now to reach new markets one has to ship a cargo outside Europe amid rising worries about transport costs, insurance and timings”, a trader in the Russian oil market said.

The United States and European Union are also working on a price cap for Russian oil, arguing it will help reduce revenues for Moscow while keeping global energy prices low.

Moscow has said it would not sell oil to countries that impose a cap and traders say they can’t see the measure working.

“Russia is very unlikely to work with a price cap, it doesn’t make sense for Moscow both politically and economically. It’s much easier for it to negotiate private deals than publicly commit to some price limitation dictated by the West,” another trader involved in Russian oil trading told Reuters.

Russia exported 8.85 million tons of Urals oil in August from its European ports, of which India, China and Turkey – which are not expected to join the embargo – bought about half, while the rest went to Europe. Russia also supplies Europe with around 3.2 million tons of oil per month via the Druzhba pipeline. The route is technically excluded from the embargo as Hungary, Slovakia and the Czech Republic want to continue buying from it.

But the top buyers from Druzhba – Germany and Poland – want to stop purchases from 2023, which means about two million tons per month will need to find new buyers.

Re-routing oil from Druzhba will be a tough task, as Russian oil ports have limited export capacity and sellers will have to arrange more tankers, traders said.

Russia can’t re-route large quantities of Urals to its East Siberia Pacific Ocean (ESPO) pipeline, which is already pumping near capacity. That makes shipments via Europe and the Suez Canal the only possible routes for Urals crude to Asia.

Even if Moscow offers more favorable terms, India and China are unlikely to be able to buy much more Russian crude as they have several long-term contracts with rival producers, such as Saudi Arabia and the United Arab Emirates.

Russian firms will also have to change the way they sell crude.

Asian oil markets have a much earlier trading cycle than the European market: as of mid-September Asian buyers are trading December-loading cargoes, while Europe is still pricing October loadings.

To avoid relying exclusively on China, India and Turkey for sales, Russia has tried to court smaller players, traders said. Sri Lanka has said it would start to purchase oil from Russia, but has only bought around 300,000 tonnes of Urals so far this year, according to Refinitiv Eikon data. Cuba has bought 200,000 tons of Urals this year. “Small players are definitely not enough for Russian oil to be absorbed. China is the last resort for the Russian oil or Moscow has to cut output eventually,” a third trader involved in the Russian oil market said.