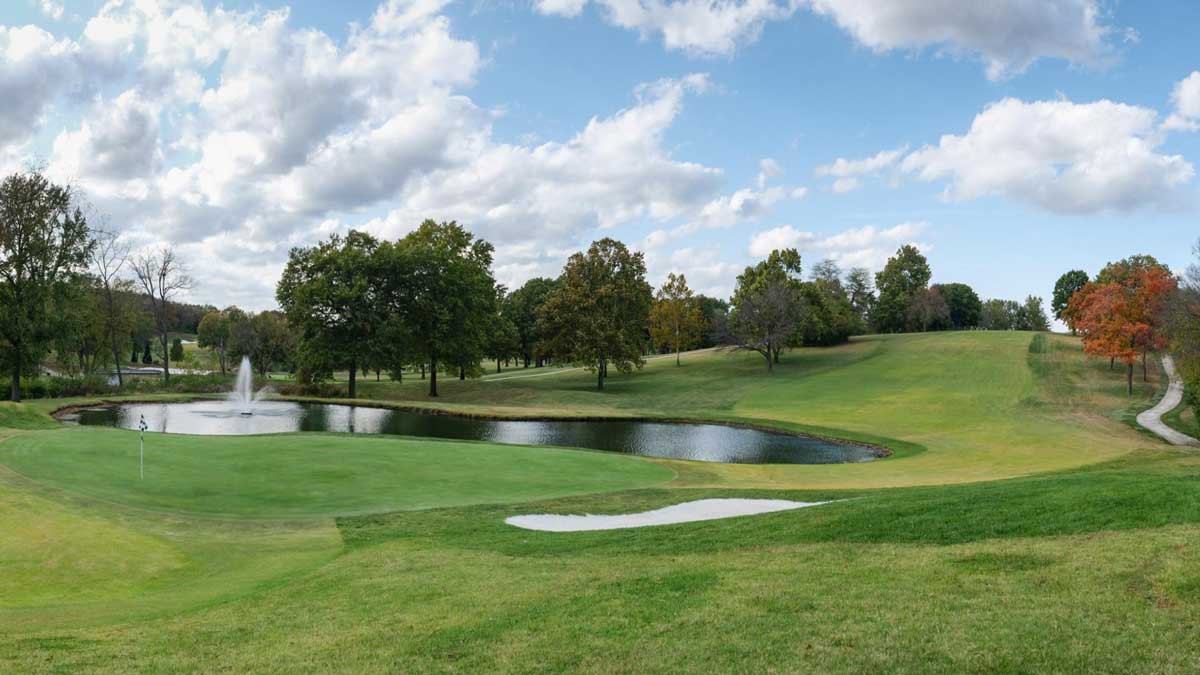 Oakwood CC, in Kansas City, played host to a US Open qualifier on Monday.

It started as many adventures do: with a bet.

A group of twentysomething Kansas City-area friends were setting stakes for their 2021-22 NFL fantasy league – in particular, how best to creatively punish the loser. Ideas were bandied about until a favorite emerged: the league’s lowest point-scorer would enter a 2022 US Open local qualifier, an undoubtedly daunting proposition for the bunch of mostly duffers who made up the league.

Among the group’s members was John Eckert, whose fantasy season actually started strong. But then things started to unravel. His star quarterback, Kyler Murray, got hurt. Ditto his workhorse running back, Derrick Henry. “It started crumbling from there,” Eckert said by phone Tuesday evening. “At the end of the year, I was the lucky loser.”

Eckert didn’t think much of his penance – he’d all but forgotten about it, in fact – until about a month ago when his friends gave him a gentle reminder that the qualifier was looming: a May 9 date at Oakwood Country Club, an old-timey Kansas City club that was a favorite hangout of President Harry Truman. The field would be loaded with local stars, which Eckert most decidedly was not.

Eckert doesn’t carry an official handicap but he estimates it to be “18 to 20,” meaning breaking 100 in any round is no guarantee. “I registered and everything,” he said of the entry process. “I had a couple of practice rounds beforehand, and then Monday was the big day.”

At the end of the year, I was the lucky loser.

You probably already have questions. Your first one might be, how does a 26-year-old weekend hacker who works for an ophthalmologist get a spot in a US Open qualifier, which requires amateur entrants to have a handicap index of no higher than 1.4. There’s a simple answer: Eckert didn’t register as an amateur; he did so as a professional. Your next question might be, huh…how? There’s another simple answer: He simply registered as a professional. There’s no verification process to determine a player’s pre-registration status for local qualifiers, so Eckert was in, ultimately landing a 9:10 am starting time with two other locals, former college golfer Cole Gritton, and Thomas Henson, a redshirt sophomore at the University of Central Missouri. Yep, it was that easy.

Which isn’t to say Eckert should quit his day job just yet.

When he arrived at the course, Eckert found a tight tree-lined design with mean pins and wind gusts of up to 30 mph. It was kind of a day when even plus-handicap players couldn’t break a pair, and indeed, on this day, none in the field would. Eckert was scheduled to go off the 10th tee, where Gritton and Henson were awaiting him with just minutes to spare before their tee time. All the pieces were in place, save for Eckert. “It’s like a minute before we tee off and John Eckert is not there,” Henson said. “The rules official is like, Do you know him? And we’re like, No, never heard the name. “

After Gritton and Henson let their drives fly, an official confirmed that Eckert had been located: He was on the 1st tee. Eckert maintains he was, in fact, not on the wrong tee but still warming up on the range and that he arrived on the 10th tee with time to spare, but regardless, he was dangerously close to incurring a two-stroke penalty before hitting his opening tee shot. If that was the first red flag for Eckert’s playing partners, the second came moments later when Eckert and his caddie ambled toward the 10th tee with a jumbo-sized staff bag holding, in part, Kirkland clubs, which are sold through Costco. “We were like, ‘Oh god, this is going to be rough,'” Henson said.

Gritton and Henson had drilled drivers down the fairway on the 500-yard par-5. Eckert elected to hit a 3-wood. He was feeling the pressure, he said, and somewhat rattled by the concern about his whereabouts. As Eckert addressed his ball, he said, it looked like a pea to him. “He opens his stance about 30 degrees left and we’re like,‘ What the heck is going on ?, ’” Gritton said. “And then he just cold tops it maybe 20 feet.”

When they finally made it to the 1st green – this was five or six Eckert shots later – Gritton spotted another oddity: Eckert was putting with his glove on. “I’m like, Man, what’s going on here?” Gritton said. For starters, a triple-bogey 8 on Eckert’s card, which was yet another omen. On the following hole, a par-3, Eckert made a double-bogey 5. Five over through two. Thomas estimated that Eckert lost between 15 and 20 balls; Eckert puts the number at closer to 7 or 8.

Which raises the matter of accounting: with all those strokes and lost balls, was 112 an accurate number? Eckert says it was. “We weren’t cheating or anything,” he said. “Me and my buddy gave them the right strokes; we were playing the right way. ”

It wasn’t all bad. Eckert parred his third hole of the round, the par-4 12th, one of four pars and three bogeys on the day, but the end result was predictably bleak.

Eckert never came clean to his playing partners, but Eckert’s caddy did, sheepishly and apologetically alerting Gritton’s caddy of the fantasy-league scheme on the 12th hole, their third hole of the round. When Gritton’s caddy relayed the news to Gritton and Henson, they weren’t sure how to feel. They both described their emotions as some combination of irritation and amusement. Sure, this was a big deal: a chance to advance to the US Open sectional qualifying and, after that, the US Open at The Country Club, near Boston. But they were also in the middle of one of the wildest golf escapades of the year.

Did Eckert’s hackery distract Gritton and Henson from the task at hand?

Neither player – both of whom signed for nine-over 81s, or eight shy of the mark they would have needed to join a playoff for the last of three available qualifier spots at Oakwood – went as far as to say that Eckert’s antics derailed their chances , but, as Gritton said, “It did kind of keep my mind wandering a bit.”

The other concern was pace of play. Shooting 112 chews up clock, especially when you’re constantly hunting for balls. Stice, the on-site rules chief, said Eckert’s group never fell off pace, but both Gritton and Henson said they were two minutes behind at the first check point and more than a full hole behind the group ahead of them when they reached the 4th hole. “It was OK, but it took some work to make it OK,” Gritton said of the pace. “We were walking fast, helping him look for balls, telling him where to drop.”

When they got wind of Eckert’s prank, Gritton and Henson stopped assisting in ball-rescue missions. More than anything, Gritton and Henson were baffled. They discussed alerting Stice of what was happening, but didn’t act, because Eckert was making a concerted effort to keep up and generally exhibited a good etiquette. Eckert’s caddy, who has played some mini-tour golf, was a guiding light. Gritton and Henson didn’t confront Eckert, either. “It’s a US Open qualifier,” Gritton said. “This is not usually something that comes up.” (Henson did report the hijinks to mini-tour chronicler Ryan French, who posted news of the round to his popular Monday Q Info Twitter feedand that’s when the story took off.)

On Tuesday, I asked Eckert if he had any reservations about declaring himself a professional and playing alongside two players who were earnestly trying to qualify. He asked me to repeat the question and then said, “Uh-uh-no.”

It’s a US Open qualifier. This is not usually something that comes up.

The episode was also a new one for Stice, who wasn’t made aware of the situation until after the round. “John did come to my table [at the turn], ”Stice said. “We were doing scoring check points so I knew he shot 58 on the front, which does happen. We do have players that shoot big numbers so we didn’t think anything outside the ordinary. Then [after his round] he came to the table, turned in his scorecard, did everything right. Two groups afterward, someone came up to me and said, ‘Did you hear?’ “

Has Stice ever seen such wackiness in his career?

“Not even close,” he said. “I’ve been in a few fantasy football leagues myself and had some weird stuff but nothing like this. This was unique and very imaginative and I got a very big kick out of it. ”

It’s less clear whether the USGA will also find the humor. Historically, Stice said, if a qualifier entrant shoots worse than a certain score, which is determined by the course rating and also the conditions and scoring during a given round, that player might find him or herself on the receiving end of a letter that disinvites them from future qualifiers, at least for a designated number of years. Stice added that in extreme cases some local golf associations will also remove “non-competitive” players from the mid-round course. Stice said his association does not have such a policy, “but this might be something that creates the policy for us.”

Eckert said he had not yet heard anything from the USGA, but he expects he might soon. And if that letter or call comes?

“That’s totally fine with me,” he said. “It’s probably not going to happen again.”

He paused for a beat and then laughed.

“Unless I lose again.”

As GOLF.com’s executive editor, Bastable is responsible for the editorial direction and voice of one of the game’s most respected and highly trafficked news and service sites. He wears many hats – editing, writing, ideating, developing, daydreaming of one day breaking 80 – and feels privileged to work with such an insanely talented and hardworking group of writers, editors and producers. Before grabbing the reins at GOLF.com, he was the features editor at GOLF Magazine. A graduate of the University of Richmond and the Columbia School of Journalism, he lives in New Jersey with his wife and foursome of kids.