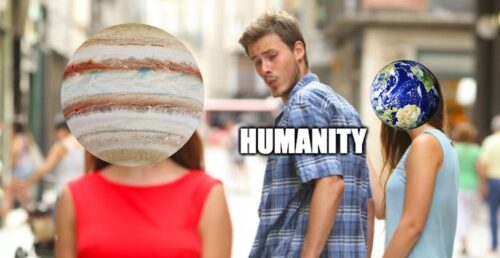 What’s up next week, Canada? Jupiter for sure — and it’s about to be its closest to Earth in nearly 60 years.

Stargazers will be able to get an extraordinary view of our solar system’s biggest planet on Monday, September 26, when the giant planet reaches opposition.

According to NASA, opposition occurs when an “astronomical object rises in the east as the sun sets in the west, placing the object and the sun on opposite sides of Earth.”

In layman’s terms, you’re going to be getting a once-in-a-lifetime view of Jupiter.

For those keeping a galactic score at home, Jupiter is 11 times wider than Earth and has an unfathomable radius of 69,911 kilometers. Essentially, if our little planet were the size of a nickel, Jupiter would be about as big as a basketball.

NASA says Jupiter’s opposition occurs every 13 months which results in making the planet appear larger and brighter than any other time of the year. But that’s not all. The gas giant will also make its closest approach to Earth in the last 59 years.

“This happens because Earth and Jupiter do not orbit the Sun in perfect circles – meaning the planets will pass each other at different distances throughout the year,” clarifies NASA. “Jupiter’s closest approach to Earth rarely coincides with opposition, which means this year’s views will be extraordinary.”

“With good binoculars, the banding (at least the central band) and three or four of the Galilean satellites (moons) should be visible,” said Adam Kobelski, a research astrophysicist at NASA’s Marshall Space Flight Center in Alabama. “It’s important to remember that Galileo observed these moons with 17th-century optics. One of the key needs will be a stable mount for whatever system you use.”

Kobelski recommends a larger telescope to see Jupiter’s Great Red Spot and bands in more detail; a four-inch-or-larger telescope and some filters in the green to the blue range would enhance the visibility of these features.

The astrophysicist says an ideal viewing location will be at a high elevation in a dark and dry area.

“The views should be great for a few days before and after September 26,” Kobelski adds. So, take advantage of good weather on either side of this date to take in the sight. Outside of the Moon, it should be one of the (if not the) brightest objects in the night sky.”

Brush up on your Jupiter knowledge

As per NASA, Jupiter has 53 named moons but scientists believe that up to 79 moons have been detected in total. The four largest moons — Io, Europa, Ganymede, and Callisto — are called the “Galilean satellites.” They are named after the man who first observed them in 1610: Galileo Galilei.

In binoculars or a telescope, the Galilean satellites should appear as bright dots on either side of Jupiter during opposition.

NASA’s Juno spacecraft — which has been orbiting Jupiter for six years — is dedicated to exploring the planet and its moons. Juno began its journey in 2011 and reached Jupiter five years later.

Since 2016, the spacecraft has provided incredible images and data about Jupiter’s “lively atmosphere, interior structures, internal magnetic field, and magnetosphere.”

If you’re keen to learn more about the giant planet, you can read NASA’s Jupiter overview right here. And if you want to know what else is happening in the sky for September, check out Jet Propulsion Laboratory’s latest “What’s Up” video: