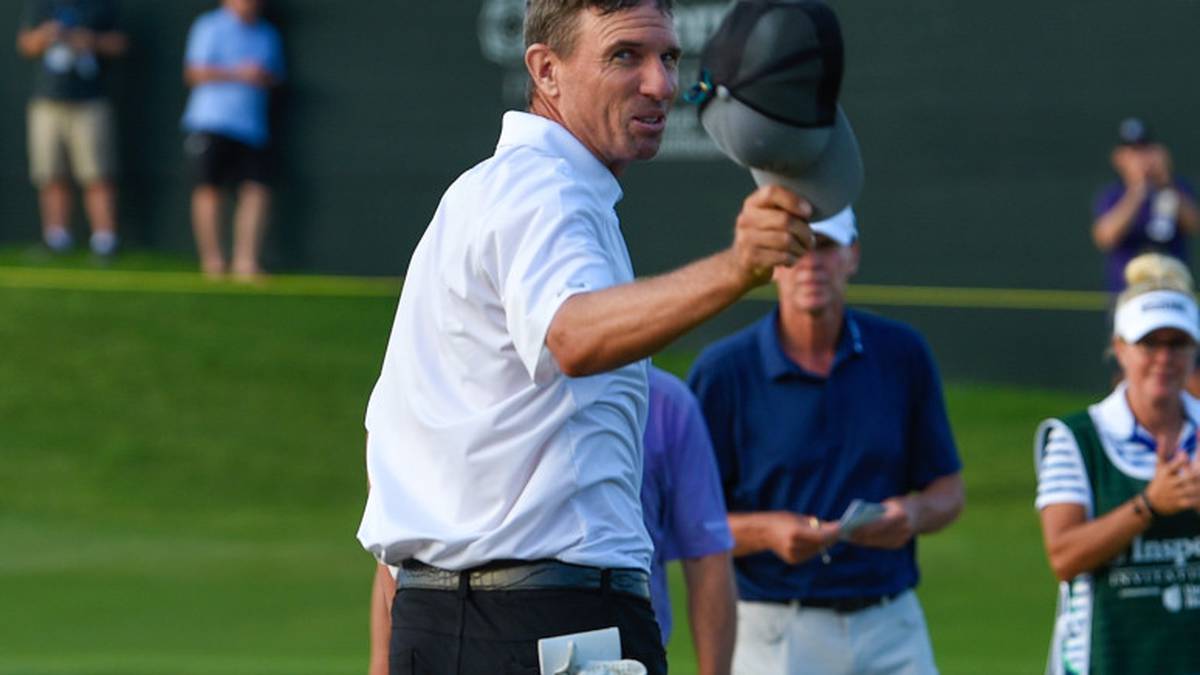 Steven Alker knows all about the lean times.

He started at home in New Zealand in 1989 and over the next three decades played 556 times on six tours that received world ranking points. Only three seasons were spent on the PGA Tour. He had two full years in Europe.

His most financially rewarding year was in 2014 when he earned US $ 261,901 (NZ $ 407,495) on what is now the Korn Ferry Tour. Alker has been around so long he played the developmental circuit under five names, starting with the Nike Tour.

His most consistent golf? That would have been on the Canadian tour in 2000 when he finished in the top 12 in seven out of eight tournaments.

Alker won the Louisiana Open in 2002 (it was the Buy.com Tour back then) and reached a career-high no. 191 in the world ranking.

“A lot of slogging and hard yards for a long time,” Alker said Monday night from his home in Arizona as he tried to soak up an amazing run of success that was a long time coming.

“I just tried to stay in the game.”

And now the 50-year-old Kiwi is on top of the PGA Tour Champions.

His latest feat was returning from a two-hour rain delay in Houston and making four birds and an eagle during a six-hole stretch on the back nine that left Steve Stricker too far behind to catch him in the Insperity Invitational.

Stricker nearly pulled off a remarkable comeback, having not played in six months because of a mysterious illness that hospitalized him and caused him to lose 25 pounds.

For Alker, this is more like a fresh start.

Houston was his second win this year – he also has two playoff losses – and he took over the lead in the Charles Schwab Cup standings. Throw in the end of last year and Alker has three wins and three runner-up finishes in his last nine tournaments.

If the PGA Tour Champions is the greatest mulligan in golf, no one is cashing in quite like Alker.

“I’m enjoying my second career,” he said with a laugh.

Life was hard. And now life is very good.

Alker still has no answers for this stark turnaround except that he never had this much fun and he never lost his love for the game.

“It’s a combination of everything,” he said. “The whole change in atmosphere, a different tour, a new chapter in my career. My game came around at the right time.”

Timing, indeed, was everything.

Alker did well enough on the Korn Ferry Tour in 2019 – he narrowly finished in the top 75 – to keep full status the following year, which turned into a two-year season because no one lost status during the four-month shutdown caused by the coronavirus pandemic.

That allowed him to keep playing – to stay in the game – right up until he turned 50.

“That was very important. I could plan a schedule and keep playing,” he said. “I started working hard on the body, got myself golf fit. My plan was to do some Monday qualifying and then do Champions tour (qualifying) school. And the rest is history.”

He got through Monday qualifying for his Champions debut in the Boeing Classic last August, shot 67 the final day and tied for seventh. The top 10 got him into the next week, and he finished third. Four more top 10s followed, and Alker played his way into the postseason and eventually won to secure a full card.

And he really hasn’t stopped.

Those last three decades are now fading from memory. If there was a nervous moment, it was deciding to move back to the US after two years in Europe. A year after he won the New Zealand PGA – co-sanctioned by the Buy.com Tour – Alker missed the cut in all 21 tournaments he played in 2010. It took four more years to get his PGA Tour card.

‘That was four years of,’ Was that a good decision? ‘ I just tried to hang in there, “he said.

And now, finally, it’s all paying off.

So much is still fresh about this second career. Because he played only 86 times on the PGA Tour, and with low status, Alker never played with some of the great in the game. In the last month, he was alongside Padraig Harrington and Vijay Singh, Ernie Els and Stricker.

“I was a little on edge,” he said with a laugh, forgetting for a moment that he was beating them.

Except for a ball in the water in a playoff two weeks ago in Dallas, Alker could very easily be sitting on three straight wins. He is taking off this week as his son prepares for high school graduation. Next week is his first senior major in Alabama.

Ahead of him are pastures that never looked greener.