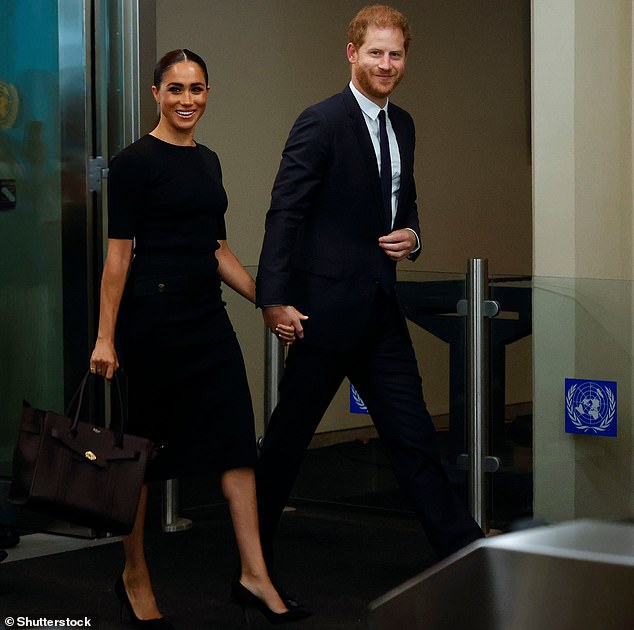 All hail the first couple of international statesmanship! Let us wonder at their wisdom and wait on bended knee for their sage advice on how we should all live. I refer, of course, to the Duke and Duchess of Sussex, who graced the United Nations with their presence this week in honor of Nelson Mandela International Day.

Who better to celebrate the memory of a man who managed 27 years in prison than a Prince who heroically escaped his own gilded prison of royal castles, adoring crowds and unimaginable luxury?

I haven’t always had such disdain for Harry and Meghan. Far from it. When she arrived on the scene, I thought this poised, beautiful woman would be a great asset for the UK; another Kate Middleton to wow crowds around the world.

Indeed, I was so impressed with the royal couple that I considered working for them.

In late 2019 I had a couple of meetings with one of their senior courtiers about writing speeches for the Duke and Duchess. Although they were already attracting some flack, I still thought that the way people perceived them could be turned around and wanted to play a small part in it.

If I’d had the chance, I would have advised Harry and Meghan to proceed with a little more humility. Pick gritty, unfashionable causes, not just the latest woke obsession. Learn the royal craft under the radar, not with a thousand cameras flashing on your latest designer outfits. Remember, you are servants of the nation, not celebrities.

But then came Megxit and all the unflattering stories that followed: the criticism that by agreeing to do a documentary for Netflix (makers of The Crown — which is often deemed unsympathetic to the Royal Family), they had been ‘disloyal and rude’; the ‘tell-all’ interviews that slurred those we thought Harry loved; the accusations of racism that trashed our whole country.

Still, Harry and Meghan were just desperate for a bit of privacy, weren’t they?

Alas, that privacy seems to have eluded them. They are to public life what Japanese knotweed is to soil: persistent, irritating and almost impossible to see the back of. We’ve had tears with Oprah, giggles with James Corden, endless ‘at home’ shots of the couple and — coming soon to a screen near you — the aforementioned Netflix documentary series, part of a deal thought to be worth around $100 million.

God bless whoever is writing their speeches these days — including the one at the UN. In it Harry talked about how ‘climate change [is] wreaking havoc on our planet, with the most vulnerable suffering most of all’.

Clare Foges (pictured) reveals that she was so impressed with Meghan at first, she considered working for the young couple by writing speeches for them

Such words might have more force if they weren’t so utterly at odds with his actions, considering he looks like he single-handedly emits more carbon dioxide than a small Polynesian nation. The couple took a reported 21 private jet trips in two years. Last year they appeared at the Global Citizen Live concert in New York to plead for a green revolution — before hopping aboard a private jet to fly home again. After the Platinum Jubilee they returned to California on a Bombardier Global 6000, a trip estimated to have emitted nearly 60 tons of carbon dioxide.

Hearing these two lectures to the public on climate change is like Kim Kardashian giving sermons on modesty. I dare say that the Sussexes will say that they are using ‘carbon offsets’ to minimize their carbon footprint (and good on them if they actually are). But even if they are, all this flying around in private jets is not a good look.

As for the couple’s hand-wringing about poverty, this might not be so irritating were they rather less conspicuous with their own wealth. For their UN outing Meghan wore a £1,255 Givenchy skirt and a £1,195 Mulberry handbag; later she donned a jumpsuit worth almost £4,000 at Robert De Niro’s New York restaurant, where lamb chops cost $52 (£43). We must hope that includes the mint sauce.

Look, they don’t need to shop at Lidl and wear sackcloth in order to qualify to have an opinion, but the contrast between the way they live and the way they preach is unbearable. As is the fact they still cling on to their royal titles and, let’s face it, profit from them. While William and Kate spend their days visiting hospices and cutting ribbons, Harry and Meghan get the glory with none of the graft.

I can only hope that at some point Her Majesty will conclude that enough is enough and strip the Sussexes of their royal titles.

If they want to stride the world stage like cut-price Bonos, fine — but please keep the name of the British Royal Family out of it.

Expensive ice baths are all the rage, apparently, but if installing a £3,000 tub to freeze your bits seems a little steep, let me offer a cheap alternative. For years I’ve followed my normal morning shower with a two-minute blast of freezing-cold water. I started this after reading that French women have ice-cold showers to keep their figures jeune (translation: youthfully perky). Having failed to take any ‘before’ pictures, I cannot attest to the perkiness, but the icy blast sure puts a spring in my step.

Roman Polanski’s lawyer is renewing calls for his case to be heard in a US court. Forty-five years ago the director fled to Europe on the eve of his trial, accused of having sex with a 13-year-old. Fawning Hollywood luvvies would welcome him back. But given that a return would also mean answering for his crimes, I wouldn’t hold your breath.

Hell hath no fury like a woman scorned, and so it was when a furious Army wife erected a banner on the home of her medical officer husband, accusing him of cheating. ‘I lack moral courage, discipline, integrity’ shouted the sign, alongside a picture of him and details of his alleged dalliance with a UN worker.

Some will wince at her lack of dignity. My response? You go, girl! If marriage vows mean anything, surely her incensed reaction is totally proportionate. Why should she go quietly when he has broken her life, even — it is alleged — kicking her out of their Army home?

Now she has vented her fury, I hope she follows Ivana Trump’s advice: ‘Don’t get mad, get everything.’

Don’t ditch the best before dates!

Perfect plums, mangoes like sunshine, strawberries the size of golf balls…I adore Marks & Spencer fruit — so much so, that it accounts for around 70 percent of my weekly grocery bill. But, alas, I might have to switch shops, for M&S plans to remove the ‘best before’ dates from 300 lines of fruit and veg. This is madness. Like most savvy shoppers, I reach to the back of the shelf to get the pack with the latest possible date. Who wants strawberries that start growing fur within minutes of getting home? Whatever gooseberry fool thought this up needs to think again.