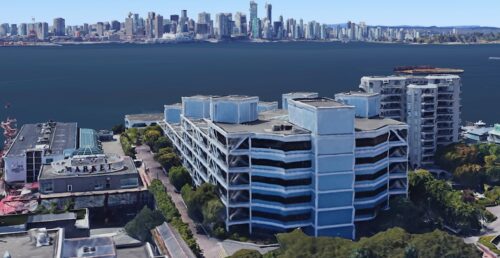 After four decades, the end of an era for ICBC’s anchor presence on the Lonsdale waterfront of the City of North Vancouver is in sight.

The provincial crown corporation responsible for providing and overseeing public auto insurance in BC announced this week it intends to fully vacate its headquarters office building perched above TransLink’s Lonsdale Quay bus exchange.

The six-storey building with 290,000 sq ft of office space at 151 West Esplanade Avenue has served as ICBC’s headquarters since it was built in 1980.

However, ICBC is still a few years away from making the big move.

In an interview with Daily Hive Urbanized, ICBC spokesperson Adam Grossman said nothing is happening for at least two years, and the actual timeline for moving is between three and five years. They do not expect any employees will move until late 2025 at the earliest.

At the moment, the crown corporation is still in the very early stages of determining its new workforce strategy and future office hubs.

But some fundamental principles have already been set in large part due to how the pandemic has changed the office workplace, and the desire to have employees be involved in the planning and decision-making process. Moreover, they have yet to begin the process of looking at other office space that is available for their needs, nor have they contracted a broker for the upcoming office space hunt.

“We really want to bring our employees at the beginning of this journey,” said Grossman, noting this is a departure from the traditional top-down corporate office relocation approach. “We want to bring our employees along and have them share their voice in what they want to see in the new location, what priorities they have, and also we really haven’t even begun the process of looking for a new location.”

The existing building is big enough to serve as the base for ICBC’s full headquarters headcount of 1,500 employees. However, the pandemic’s shift in workplace patterns has meant that the office space is only 20% to 40% occupied on any given day.

The terraced office building is in a highly attractive location, with ample amenities, food, and beverage options, and employees even enjoy an expansive rooftop patio with panoramic views of the harbor and the downtown Vancouver skyline. But the location has regional accessibility challenges — even though it is directly served by SeaBus and a major hub for buses.

Grossman says only 30% of headquarters office staff live on the North Shore, with the remaining 70% living elsewhere in the Lower Mainland, south of Burrard Inlet.

For this reason, he says, a new headquarters office will likely be in a central location in the Vancouver or Burnaby areas — closer to where most of the employees live. He says an office adjacent to a SkyTrain station would be an “absolute priority.”

“We’d love to have a location where people take transit to work instead of driving,” said Grossman.

As for what will happen to ICBC’s long-term building after they leave, Grossman says it is too early to identify the possibilities, and that this will require consultation with provincial and local governments as well as other stakeholders.

The building is aging and in need of reinvestment. According to BC Assessment, the latest assessed value of the property is $103.2 million, with $101.8 million for the land and only $1.4 million for the major structure, which provides an indicator of the building’s condition.

But uncertainty or a prolonged vacancy of the building will have an economic impact on the surrounding retail and restaurants, with ICBC being the single largest employer in the area. It would leave a big void in Lower Lonsdale.

There are some recent precedents of office-based organizations looking for modern office spaces, downsized spaces, and/or better regional accessibility.

In 2017, Metro Vancouver Regional District left its 1983-built headquarters office at the “Golden Towers” ​​at 4330 Kingsway in Burnaby’s Metrotown district, after acquiring the 2014-built, 29-storey Metrotower III office tower at Metropolis at Metrotown Mall for $205 million. . This does not include the $35 million the regional government spent to equip the new space, with the regional district occupying about half of the tower and leasing the remaining levels as a revenue source.

The following year, the regional district sold the “Golden Towers” ​​for $86 million to Slate Asset Management, which has since embarked on a major renovation to turn the 1980s-built office complex into Capital Point — an AAA premium caliber strata office development.

Before the end of 2022, Best Buy will move its Canadian headquarters office from its sprawling business park office campus at 8800 Glenlyon Parkway in the Big Bend industrial area of ​​South Burnaby — where the company has occupied about 140,000 sq ft for 25 years — to a new office tower next to the Best Buy Cambie store in Vancouver.

Taking into account the semi-remote work environment adopted during the pandemic, Best Buy is downsizing its headquarters office to about 78,000 sq ft over the top five floors of the new 10-storey office building at 425 West 6th Avenue, which is now nearing completion. . The new location is also strategically near amenities, shops, dining, and services, as well as SkyTrain Olympic Village Station, and the future regional SkyTrain hub of Broadway-City Hall Station, which will be served by both the Canada Line and the Millennium Line. starting in 2025.

Earlier this year, Burnaby City Council approved the British Columbia General Employees’ Union (BCGEU) application to build a mixed-use tower development next to SkyTrain Royal Oak Station in Burnaby. Most of the building’s 49,000 sq ft of office space will be dedicated for the union’s needs, replacing the existing leased Lower Mainland regional office at 2920 Virtual Way in Vancouver and at least part of their main headquarters office at 4911 Canada Way in Burnaby. The property for development is owned by the union.

ICBC is no stranger to making office real estate plays, either.

As an economic stimulation and long-term investment move, the crown corporation acquired Surrey Center Mall, and turned it into Central City in the late 1990s and early 2000s through the revitalization of the shopping center and the construction of a 25-storey landmark office tower. with 560,000 sq ft of office space. This project, designed by Bing Thom, and Simon Fraser University’s subsequent decision to open a Surrey campus in the building provided significant momentum for growing Surrey City Centre.

In 2007, ICBC sold Central City to Blackwood Partners for $246 million.