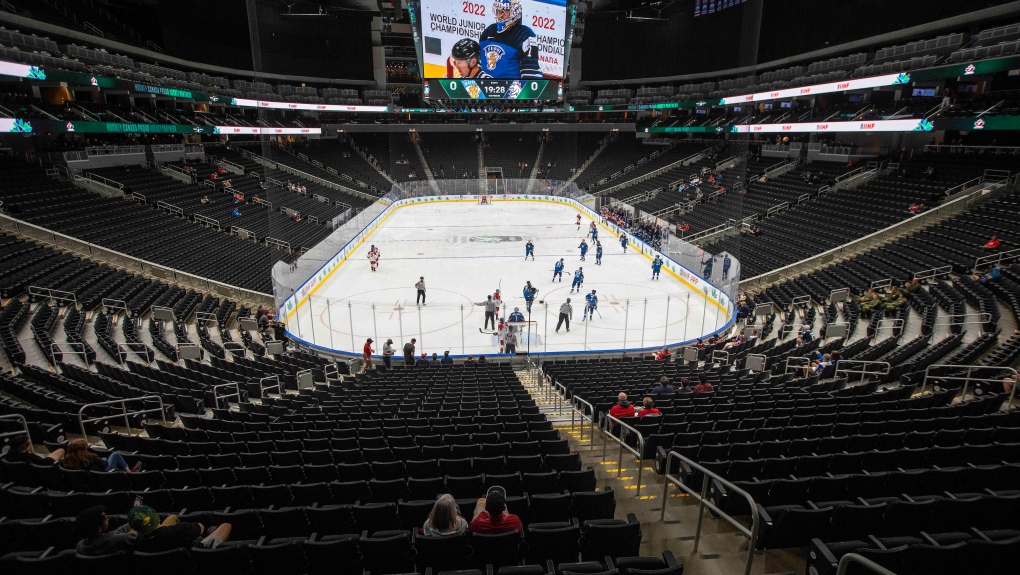 Tickets for Edmonton’s world junior men’s hockey championship haven’t been a hot commodity this summer and International Ice Hockey Federation officials say the high price of admission, the tournament’s odd timing and a specter of scandal are to blame for low attendance.

The 2022 tournament wrapped Saturday with Canada battling Finland for the gold medal.

While the final was expected to draw the biggest crowd of the tournament so far to Rogers Place, average attendance before Saturday’s medal games was just 1,525 per game. Canada averaged 4,400 fans across its first six games.

Holding the world junior tournament during the hot summer instead of the usual winter holidays created a number of challenges, said IIHF president Luc Tardif.

“We knew August was not the best time and we did not expect the attendance that we usually do,” he told reporters in a wide-ranging press conference before Saturday’s final.

The 2022 tournament originally opened Dec. 26, 2021, in Edmonton and Red Deer, Alta. Rising COVID-19 cases among players and officials caused the forfeiture of games and the event was halted after just four days.

Ticket prices are set by the host country and the cost for a seat at the August version of the tournament remains steep, starting at more than $100 for many games.

Seats in the lower level ranged from $160 to $476 for Saturday’s final, with a ticket in the highest reaches of the arena available for $60.

“(The IIHF) does not set the prices,” tournament chair Henrik Bach Nielsen said. “I do not know if the prices were set as normal world juniors and there was no reaction to this.

Organizers needed to account for the unique challenges of redoing the 10-team tournament in the summer, he added.

“Why not, then, try to find an August price for the tickets?” Bach Nielsen said.

Hockey Canada has previously acknowledged multiple reasons for lack of interest in the tournament, including the microscope the organization is under for its handling of alleged sexual assault by some members of previous junior men’s teams.

“First, the COVID-19 pandemic delayed this tournament until August,” the organization said in a statement. “And second, there is understandable scrutiny from Canadians of Hockey Canada and the culture of hockey.”

Hockey Canada executives were called on the carpet in federal government committee hearings in June and July.

“We do not have to hide from ourselves the atmosphere around the world juniors,” Tardif said. “And that’s a bad thing because I think the kids (playing in this tournament), the organizing committee doesn’t deserve that because they are not guilty on that.”

The scandal currently engulfing Hockey Canada is a “national affair,” and once investigations into what happened are complete, the IIHF will determine whether the organization will be sanctioned, he added.

“At the moment, we’re following, and our reaction will come at the end of the investigation, when the facts will be confirmed on that, when we know exactly the responsibility of everybody,” Tardif said..

Also, the absence of perennial contender Russia, which was barred by the IIHF for that country’s invasion of Ukraine, deleted some of the usual marquee matchups from the event.

Tardif said Russia’s entry in the tournament in the future will be evaluated year by year.

Canada will also host the 2023 world junior championship in Moncton and Halifax in December. Tickets are selling well for that tournament, Tardif said.

Despite an odd 2022 tournament, the world juniors remain a strong brand and the tournament has been a success for many years, Bach Nielsen said.

“We should not make any revolutions out of this year,” he said when asked what lessons the IIHF could take from this year’s event.

“This is one-time, here in Edmonton with this situation in August. So I don’t think we have any plans to change the world juniors. We just need to come back to normal.”