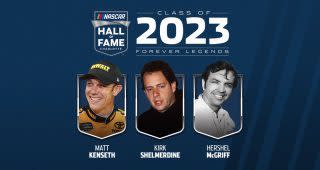 CHARLOTTE, NC – Driver Matt Kenseth and crew chief Kirk Shelmerdine – both champions at NASCAR’s highest level – will become the newest Modern Era members of the NASCAR Hall of Fame, along with ageless Hershel McGriff, who was elected from a group of five Pioneer Division nominees.

Longtime NASCAR executive Mike Helton was also named the recipient of the Landmark Award for Outstanding Contributions to NASCAR during the announcements made by NASCAR Chief Operating Officer Steve O’Donnell at the NASCAR Hall of Fame in Charlotte, North Carolina.

Kenseth and Shelmerdine were voted into the Hall of Fame from a group of 10 nominees by the NASCAR Hall of Fame Voting Panel, which met in person for the first time since 2019. The panel met via Zoom in 2020 and did not meet in 2021 because of the coronavirus pandemic.

Kenseth, who led the Modern Era vote with 69 percent, won the NASCAR Cup Series championship in 2003, his fourth full season of competition. Included in his 39 career victories (tied for 21st all-time) are wins in NASCAR’s marquee races – the Daytona 500 (twice), Southern 500, Coca-Cola 600 and NASCAR All-Star Race.

Kenseth’s championship also had ramifications that remain part of the sport today. Though he led the Cup standings for the final 32 events of the 2003 season, he won the series title with one victory. That contributed to the impetus for a playoff, which was introduced the next year and evolved into the elimination format currently in place.

“It feels good,” Kenseth said during an interview on SiriusXM NASCAR Radio. “It’s obviously a huge honor just to be on a list or to be under consideration, but to be voted in really means a lot to me. It’s kind of like the bookend of your career.

“It’s not for anything you did today, but what you did throughout your career. Kind of like the perfect bookend. To go into the Hall of Fame when everything is said and done and all over, to kind of look back at it, it’s pretty neat. ”

Kenseth added that, in retrospect, his view of his own career has changed over the years.

“I’ve slowly been changing my view of my career the longer I’ve been away from it,” Kenseth said. “When you’re in the middle of it, I don’t know if it’s a good habit or a bad habit, but it always seemed to work for me, when you’re in the middle of it, you agonize over the losses and the mistakes a lot more than the successes and the wins, unfortunately.

“So I think the longer you’re away from it, certainly, you start to shift your focus a little bit from having knots in your stomach over losing the Daytona 500 in the last corner or getting beat by Jimmie (Johnson) in the last corner way back, 15 years ago, in Las Vegas. Obviously, I still think about it, or I wouldn’t remember that right now.

“Instead of trying to agonize over some of that stuff and trying to figure out how you’re going to be better, you start to change your focus on some of the things that did go right and how extremely fortunate I was to have so many great race teams, crew chiefs, sponsors and owners – everybody that makes it happen to give me the chance to be successful. ”

Shelmerdine posted his first win as a crew chief in 1983 at Riverside, California, with driver Ricky Rudd. That was the start of a long skein of success at Richard Childress Racing, where Shelmerdine won championships with NASCAR Hall of Famer Dale Earnhardt in 1986, 1987, 1990 and 1991.

The 1987 season was a watershed campaign for the crew chief from Philadelphia. The Earnhardt / Shelmerdine pairing won 11 races and posted 21 top fives and 24 top 10s in 29 starts.

Shelmerdine took the concept of early retirement to an extreme. In 1992, at age 34, he left his role as crew chief to try his hand at driving. All told, Shelmerdine made 41 starts across NASCAR’s top three national series.

In the 50 ARCA Menards Series races from 1993 through 2008, Shelmerdine claimed three victories and finished in the top five 14 times. He was named on 52 percent of ballots during the Hall of Fame voting.

“I’m still kind of in shock, actually,” Shelmerdine said. “I’ve been on the ballot before, and there’s a whole lot of pretty big names that should be there as well. I just kind of thought it would be a few years before it happened. But my phone started blowing up about 20 minutes ago, and here we are…

“Racing at the level we were at, the things we were trying to do took everything you had and then some,” Shelmerdine said. “That was pretty much all you did. But the longer away it gets to be, the tougher it is to express how much it meant to us at the time and nowadays. It feels really good to get some kind of fresh recognition for it, because it was pretty big for us back then and in our aging minds, it still is. ”

McGriff, who turned 94 in December, competed in NASCAR races for seven decades, starting with the 1950 Southern 500 at Darlington Raceway and ending with the 2018 K&N Pro Series West race in Tucson at age 90.

In 1954, McGriff picked up his only four victories in the Cup Series, at San Mateo, Macon, Charlotte and North Wilkesboro. The driver from Bridal Veil, Oregon, distinguished himself on the West Coast, winning 37 times, third all-time in what is now the ARCA Menards West Series, and earning the championship in 1986.

McGriff was participating in the Kyle Petty Charity Ride when his name was called, so he didn’t get the official word until the motorcycle riders stopped for fuel.

“I always loved the sport,” McGriff said, “but I couldn’t go full-time because I had to raise a family… I started when they didn’t have go-karts – we just drove street cars. Right after World War II, September 16, 1945, I ran my first race (on a dirt track).

When Helton was named to the NASCAR presidency in 2000, he was the first person outside the founding France family to hold that position. Helton began his nearly five-decade-long career in motorsports as public relations director for Atlanta Motor Speedway.

The safety of competitors has always been front-of-mind for Helton, who was a leading voice in NASCAR’s commitment to safety and in promoting the creation of the NASCAR Research & Development Center in Concord, North Carolina.

Named Vice Chairman of NASCAR, Helton serves as a senior advisor to the sanctioning body and has been a driving force in the charitable endeavors of The NASCAR Foundation.

“It’s kind of humbling,” Helton said. “I’m better suited recognizing people that did things in the sport than accepting. When we first put this Hall together, we kind of knew it was going to be a big part of our sport going forward, because it could tell our story from the past. To have been part of that story along the way has been rewarding of its own, but this is kind of out of the box for me. I’m better off recognizing somebody else than being recognized, but I’m very grateful. “

On the Modern Era ballot, other top vote-getters (in order) were Harry Hyde, Neil Bonnett and Harry Gant. For the Pioneer Ballot, AJ Foyt and Banjo Matthews were the other highest recipients of votes, in that order.

An additional vote was cast as the collective result of fan balloting on NASCAR.com. The fan vote went to Kenseth and Gant on the Modern Era Ballot and to Foyt on the Pioneer Ballot. 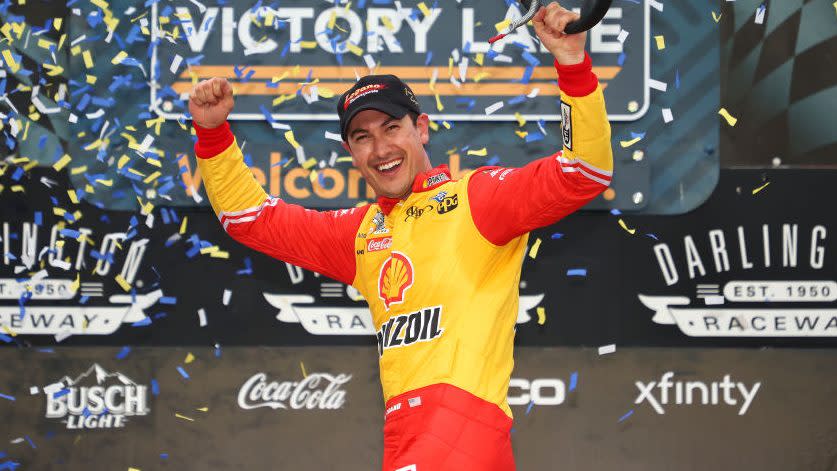