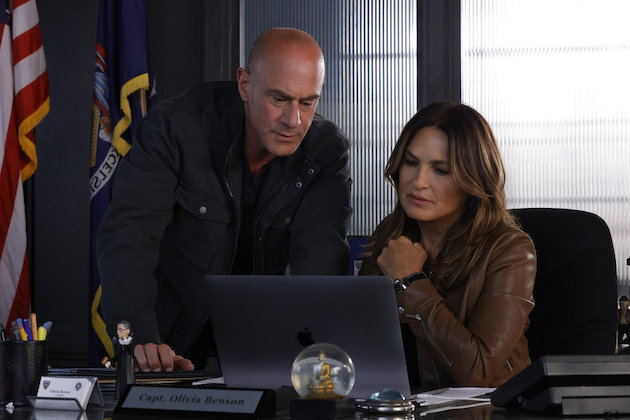 This Law & Order: Organized Crime premiere recap is for the first hour of a three-way crossover involving Law & Order: SVU and Law & Order. Make sure to check out our recaps of Parts II and III.

When a young girl is shot in cold blood, various squads in the New York City Police Department team up to find the people responsible, then the District Attorney’s office works to hold them accountable Yep: It’s time for Law & Order‘s first-ever crossover with SVU and Organized Crime! (Read a Part 2 recap here, and a Part 3 recap here.)

The event opens as Cosgrove is hanging out with his teenage daughter, who’s lobbying him to let her be homeschooled because she’s afraid of something terrible happening while she’s in her school. He says no and assures her that bad things rarely come to pass… and just then, a young, bleeding girl runs by their table at an outdoor cafe.

She’s a Ukranian whose entire family was killed in the Russian invasion in March, and we saw her escape from a yacht after fighting a man. She’s so out of it that she gets hit by a car, and while Frank is signaling for an ambulance to come closer, a masked assailant walks up to her and shoots her where she’s lying in the middle of the street.

Det. Shaw (played by Supergirl‘s Mehcad Brooks), who is new to homicide after working in narcotics, arrives on the scene. Pretty soon, it looks like he’s going to work the case with Cosgrove. We soon learn that the girl’s name is Ava, and she was reported missing months before.

Cosgrove shepherds Shaw through his first death notification (Ava’s distraught aunt slaps him) and his first autopsy, which shows evidence that Ava was the victim of repeated sexual trauma. That, along with caviar in her stomach and salt water on her skin, lead the detectives to Chelsea Piers, where Cosgrove intimidates a dock manager into giving him surveillance footage of a mega yacht that was parked there the night before. And when Shaw says that maybe they can just get a subpoena next time, we learn that Cosgrove’s new (temporary?) partner is a lawyer as well as a cop.

The detectives learn more, which leads them to think that Ava was sex trafficked. And that brings them to SVU, where Capt. Benson hooks them up with some NYPD security camera footage that helps bring them to the man they think is the shooter. Frank gets up in the guy’s face, putting his hands on him, and that makes Stabler very mad when he finds out.

Turns out, Organized Crime has been working a case involving the guy for six months, and — as Elliot loudly informs Frank in the middle of the precinct — he’s worried that the shooter has been spooked and will take off.

Over at OC, Bell and a much calmer Stabler explain that the shooter, Maxim Sirenko, is deeply involved in a drug-and-other-bad-stuff ring. They’re hesitant to spook him and his gang, so they want to hold off and investigate more before attempting to bring him in. But then Cosgrove guilt-trips Stabler about how he thought he’d be more passionate about avenging the death of an innocent girl… and Bell says it’s Stabler’s call… and then Stabler is meeting with his criminal informant and having him clone Sirenko’s phone in a bid for the NYPD to nab some damning evidence about the murder.

Although it’s a very close call, the CI gets the job done. And Jet is able to pull downloaded surveillance footage from the phone, which gives them visuals of a potential witness (another girl) and her female pimp. Liv has Rollins, Velasco, Fin and the rest of the squad comb their records for, like, 90 seconds before Velasco has a lead on the pimp. Soon after, Cosgrove, Stabler and a SWAT unit are raiding the woman’s house. There’s some shooting, but they take her into custody with no casualties. Upstairs at the house, a young woman comes at Cosgrove with a kitchen knife, but he easily disarms her and warns all the other officers not to shoot. As he cuffs her, the woman cries and repeatedly begs him to shoot her.

Now it’s your turn. What did you think of Organized Crime‘s premiere/the first hour of the crossover? Grade it via the poll below, then hit the comments with your thoughts!