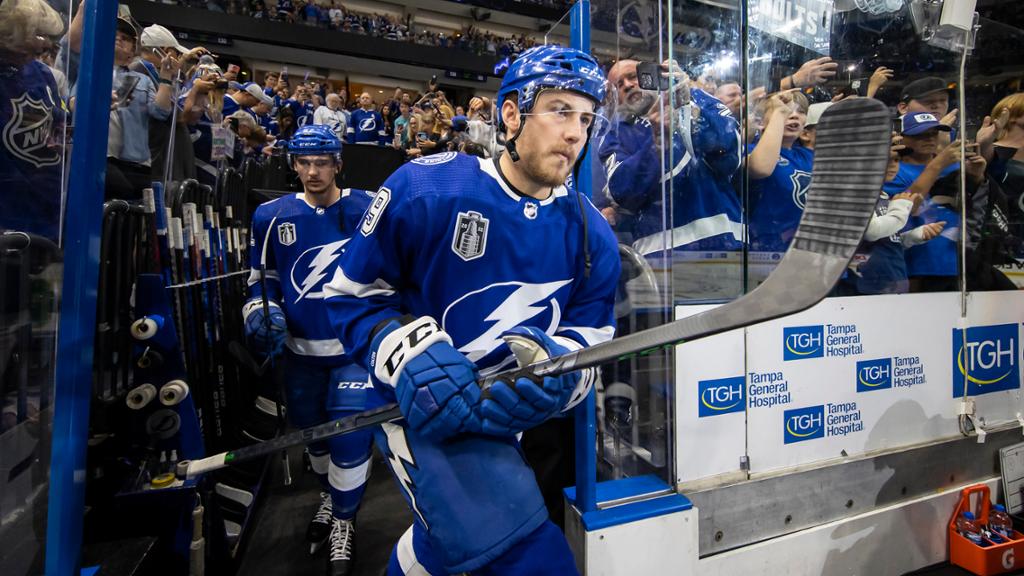 Despite having their bid for a third straight Stanley Cup championship ended by the Colorado Avalanche in the Stanley Cup Final, the 25-year-old forward says there’s a hunger for more.

“They won that first one [in 2020] and a term that got thrown around was like, ‘Oh, we’re not full yet,'” Colton said. “So, you win that first one, then you think OK, what’s going to happen next year and then we come back , there’s excitement again, guys want to win it again, we go out and we win it again. And then same thing with this year.

“I think guys, when you come into training camp, there’s a lot of nerves, because every night we have the bullseye on our back, teams want to beat us. I think it’s that excitement. And then to just be able to go to the Final again shows that we’re still in contention and we’re not content.”

The Lightning are trying to become the first team to reach the Final in four straight seasons since the New York Islanders did it five seasons in a row (1980-84).

Colton is hoping to play an increased role in that quest, possibly filling the top-six forward spot left open when Ondrej Palat signed with the New Jersey Devils.

“Obviously he did so much for the team offensively, defensively, he was physical,” Colton said. “If we needed a big goal, he was going to score it. So, he’s obviously a big loss. But I’ve had a great summer and I’m looking forward to this year. … Anything I can do to step up my role a little bit from last year I’m willing to do.”

Colton has also earned a reputation as a clutch player. He scored the Stanley Cup-clinching goal in the Lightning’s 1-0 win against the Montreal Canadiens in Game 5 of the Final in 2021. Then he scored two game-winning goals in the playoffs last season, including one with 3.8 seconds left in a 2-1 win against the Florida Panthers in Game 2 of the second round at FLA Live Arena, a series the Lightning went on to win in four games.

Despite his success last season, Colton still sees areas he can get better in, especially if he wants to slide into the all-around role Palat played.

“It’s just becoming a more well-rounded player,” Colton said. “I can’t harp on the success that I had last season. Obviously I was happy with what I did but was disappointed with the outcome that we had. So, obviously, there’s still more that I can build on, whether it’s working on my defensive game, winning face-offs.

“It’s such a fast game that you’ve got to be able to play in all three zones. … Talking about ‘Pally’s’ situation, he was playing against top-end guys. To be able to play against those guys night in and night out takes a lot. I could definitely improve in those areas.”

Colton has worked on his game while spending the summer with family and friends in New Jersey. He even got to throw out the first pitch at a game for the Trenton Thunder, which plays in the MLB Draft League.

Colton played baseball and hockey until his junior year of high school when he chose to play hockey full time.

It certainly proved to be a good decision for him. And with continued improvement in his game, it could earn Colton another contract with the Lightning.

He’s in the final season of a two-year, $2.25 million contract ($1.125 million average annual value) and can become a restricted free agent after the season.

Forward Anthony Cirelli and defensemen Mikhail Sergachev and Erik Cernak each signed an extension with the Lightning on July 13, and Colton hopes his turn can come soon, saying he’d love to spend his entire NHL career with Tampa Bay.

“I understand it’s a business,” he said. “We have such a great team and guys deserve to get paid and we’re going to be up against them [NHL salary] cap every single season. I understand the business side of it, but I don’t like to look too much into it or work myself up.

“I think if I just come in and play my game, it’ll speak for itself. Obviously, I want to stay in Tampa forever, I think its the best place to play in the NHL without a doubt. But whatever happens I just want to do what’s best for me and my family.”