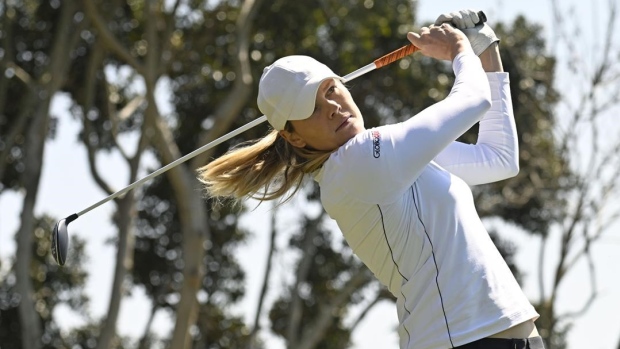 Working smarter, not harder, especially on the green, has made all the difference for Canada’s Maude-Aimee Leblanc.

The product of Sherbrooke, Que., Retired from professional golf in October 2019 but returned in September 2020, reinvigorated after a year away from the grind of playing in a different city every week. Leblanc had a remarkably strong 2021, finishing in the top 10 of what was then called the Symetra Tour, the LPGA’s feeder circuit, to qualify for the top tour in women’s professional golf.

Leblanc has picked up where she left off this season, with two top-10 finishes in her first full year on the LPGA Tour. She was the only Canadian to make the cut at the DIO Implant LA Open last week, ultimately tying for 43rd.

“I think it’s the same reason why last year was also successful: my putting. My putting has made the biggest difference,” Leblanc said. “Since I started working with a new coach (Sal Spallone) a couple of years ago, we worked on my putting a lot.

“It’s been extremely consistent since then.”

The six-foot-one Leblanc has always been a big hitter, with an average driving distance of 273.03 yards this season, 14th on the LPGA Tour. But with her putting dialed-in Leblanc’s closed the gap and is now ranked 37th in the Race to the CME Globe heading into this week’s Palos Verdes Championship in Palos Verdes Estates, Calif.

I am a longer hitter, so yeah, sure, I’m going to miss a lot of fairways if I’m a little bit off that day, but that’s not what’s gonna make me miss a cut or not being able to finish top 10, “said Leblanc, who tied for eighth at the Gainbridge LPGA on Jan. 27 and tied for fourth at the JTBC Classic on March 24. “It’s really going to come down to the greens for me.”

On top of cleaning up her putting, Leblanc said that the 11 months away from professional golf gave her perspective. During that time she found the value in taking it easy on herself and limiting her time at the course.

“I had to find a way to somehow enjoy the game again and just not put as much pressure on myself, take it too seriously,” Leblanc said. “To be honest with you, my practice time was probably cut in half.

“I definitely don’t practice as much as I used to. I don’t spend hours on the range, practicing, trying to think about a million things. I feel like I simplify a lot of things now.”

Leblanc will be joined by Brooke Henderson of Smiths Falls, Ont., Maddie Szeryk or London, Ont., And Megan Osland of Kelowna, BC, at the inaugural Palos Verdes Championship when it tees off on Thursday.

Osland qualified for the tournament on Monday after just missing out on making the LA Open the previous week. She said that her recent success was because she has developed a strong personal routine.

“Especially under pressure, like situations like today where I can just fall back on that routine and really trust it,” Osland said after qualifying. “I’ve done a lot of work on my putting as well and that really showed today too.”

EPSON TOUR – Calgary’s Jaclyn Lee and Selena Costabile of Thornhill, Ont., Are 46th and 47th respectively on the Epson Tour’s money list. They’re both in the field at this week’s Garden City Charity Classic in Kansas, which tees off on Friday.

PGA TOUR – Adam Svensson of Surrey, BC, is the top-ranked Canadian at this week’s Mexico Open at Vidanta Vallarta, Svensson is 106th on the FedEx Cup rankings. He’ll be joined in Vallarta, Mexico, by Nick Taylor (116th) of Abbotsford, BC, Roger Sloan (161st) of Merritt, BC, Michael Gligic (210th) of Burlington, Ont., And David Hearn (228th) of Brantford , Ont.

KORN FERRY TOUR – Vancouver’s Stuart Macdonald dropped five spots on the second-tier tour’s standings, from 74th to 79th this week. He’ll look to rebound at the Huntsville Championship at The Ledges in Alabama. Toronto’s Albin Choi and Edmonton’s Wil Bateman are also in the field. Choi is 89th in the standings, down from 84th last week. Bateman is 126th.

LATINOAMERICA TOUR – Myles Creighton of Digby, NS, fired a 6-under 65 to tie for ninth at last week’s JHSF Aberto do Brasil. Creighton will lead the Canadian contingent into the Diners Club Peru Open on Thursday at Los Inkas Golf Club in Lima, Peru, He’ll be joined by Henry Lee of Coquitlam, BC, Noah Steele of Kingston, Ont., Ziggy Nathu of Richmond, BC, and Toronto’s Matt Kang.

DP WORLD TOUR – Aaron Cockerill of Stony Mountain, Man., Tied for third at the ISPS Handa Championship in Spain on Sunday. He’ll be back in action on Thursday at the Catalunya Championship at the Stadium Course of the PGA Catalunya Golf and Wellness, in Girona, Spain.

This report by The Canadian Press was first published April 27, 2022.