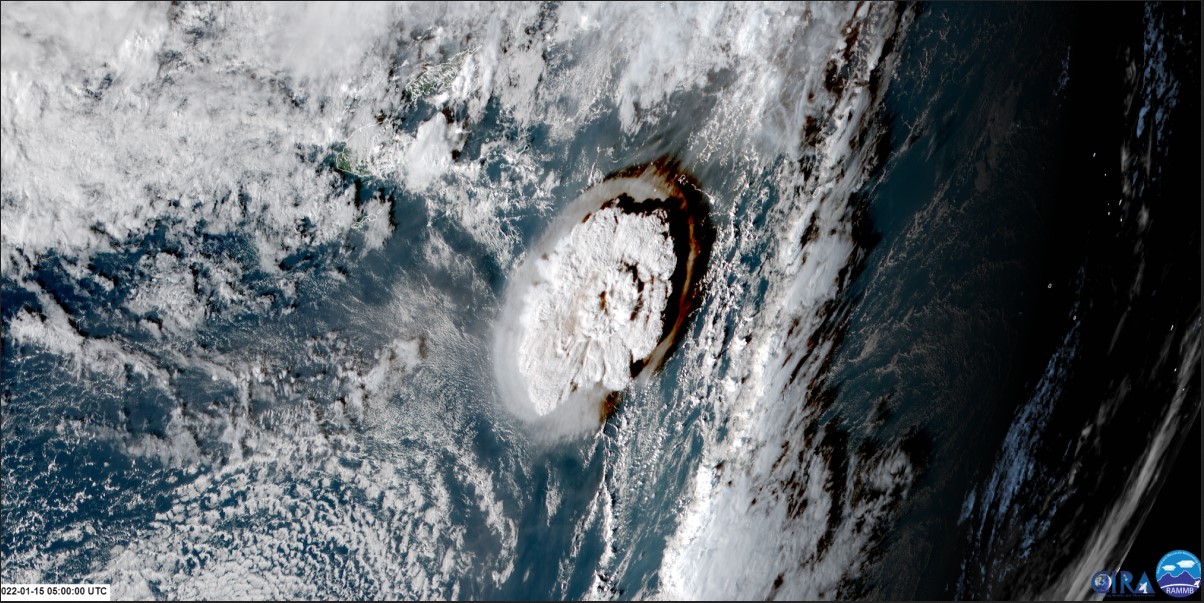 Joseph Huba, Vice President at Syntek Technologies looks at the Tonga Volcanic Eruption and results from a high-resolution simulation of the event to model the Ionosphere response

The Tonga Volcanic Eruption, known technically as the Hunga Tonga-Hunga Ha’apai eruption, occurred on 15 January 2022 at 04:14 UT and was estimated to have released – 9 – 37 megatons of TNT equivalent [Astafyeva et al., 2022]. The eruption generated a massive atmospheric disturbance that caused major effects on the ionosphere worldwide.

We report new results from a high-resolution simulation of the Tonga event using the coupled SAMI3/HIAMCM/MESORAC model. SAMI3 (Sami3 is Also a Model of the Ionosphere) is a global, three-dimensional, physics-based model of the ionosphere/plasmasphere system [Huba and Joyce, 2010]; it is based on the original SAMI2 model (Sami2 is Another Model of the Ionosphere) model [Huba et al., 2000].

The HIAMCM model (Becker et al., 2022) is a Global Circulation Model (GCM) based on a standard spectral dynamical core with a terrain-following vertical coordinate and a staggered vertical grid [Simmons and Burridge, 1981]. This core is equipped with a correction for non-hydrostatic dynamics, which is important in the thermosphere where many of the resolved gravity waves (GWs) have high intrinsic frequencies.

How did the Tonga volcanic eruption affect the ionosphere?

In Fig. 2 we show isosurfaces of the vertical neutral wind velocity (left) and disturbed electron density (right) at time 10.50 UT (10:30 UT), roughly 6 hours after the eruption. At this time the atmospheric disturbance of the neutral wind has propagated across the southern polar cap and into the northern hemisphere. Interestingly, at this time, a series of EPBs has developed west of the epicenter; this is consistent with the observations reported by Aa et al. (2022). These EPBs are generated, in part, because of large variations in the zonal neutral wind (not shown) that affect the electrodynamics of the ionosphere.

For the first time, using a high-resolution, coupled ionosphere/thermo-sphere model, we have been able to demonstrate that the dramatic and significant impact the Tonga eruption had on the earth’s ionosphere. We add that this research directly relates to the NASA Global-scale Observations of the Limb and Disk (GOLD) mission and The Ionosphere Connection Explorer (ICON) mission which are designed to study atmosphere/ionosphere interactions.

Drs. E. Becker and SL Vadas were key collaborators on this research project, providing the HIAMCM/MESORAC data inputs.
This research has been funded, in part, by the National Science Foundation (AGS1931415).