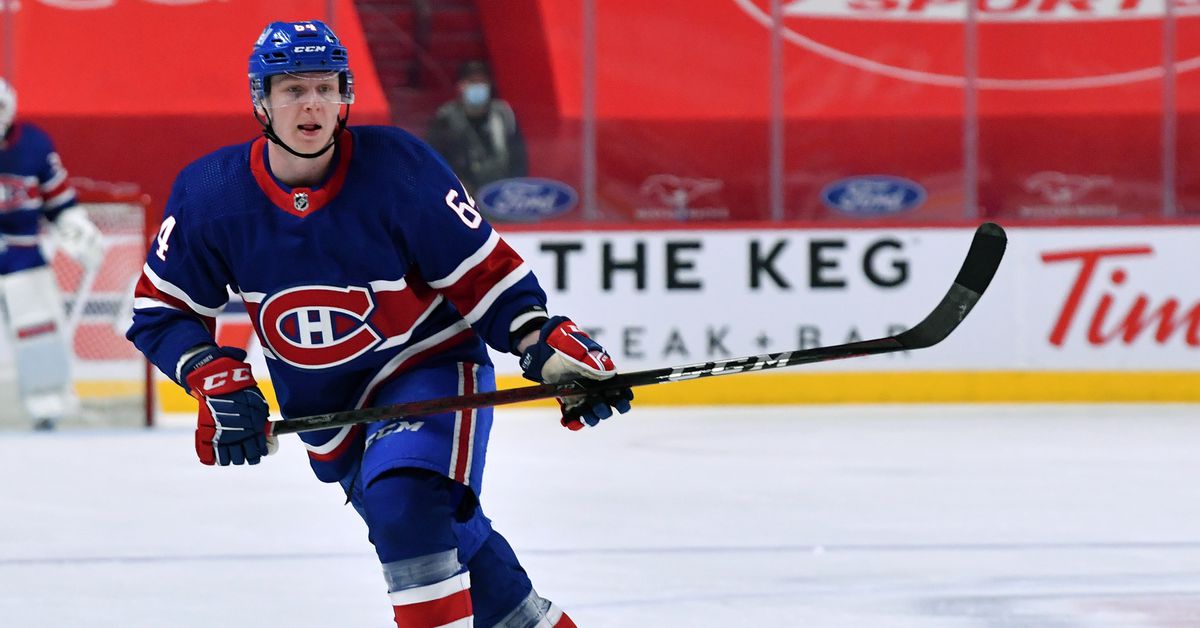 As Montreal Canadiens training camp opens, all eyes are sure to be on the team’s top young prospects as they try to stake claim to a roster spot in the NHL. First overall pick Juraj Slafkovsky will be the one with the most focus, with the defensemen battle including Kaiden Guhle, Jordan Harris, and Arber Xhekaj, among others likely close behind.

There are some other interesting names that may not get the attention of some of the others, but may have their names heard by the end of the camp.

There were a lot of people surprised when the Canadiens signed Otto Leskinen after he left the team to go to Europe for a year. After a tumultuous year that saw him play in the KHL and Finnish Liiga, he’s back on an NHL contract with the team.

The conventional wisdom is that he was signed to provide the Laval Rocket with some additional veteran depth on the blue line as they lost Xavier Ouellet, Louie Belpedio, and Tobie Paquette-Bisson from last year’s team. However, as the Canadiens open camp, he could be the perfect stop gap to make sure some of the younger players aren’t forced into NHL jobs they aren’t ready for.

Corey Schueneman also falls into this category, but Leskinen has more professional experience, and although he’s a left-shot, he can play the right-side in a pinch. He only played six NHL games over two seasons with the Canadiens, but the circumstances surrounding the team are much different now, and his flexibility and experience can prove important to the team. At only 25, he’s not your typical veteran presence, but with over 200 games in the Finnish top division, and 85 AHL games, he is someone who can push his way into NHL consideration.

After a great performance at the summer World Juniors, Mysak has already reminded people what made him a second-round pick in the 2020 NHL Draft.

Let’s be realistic, he’s not in the picture for an NHL roster spot after camp, but his performance among NHL players will go a long way in determining where he stands in the pecking order in the AHL, and among NHL call ups.

Two years ago, Mysak used the OHL season’s cancellation to become a dependable member of Joël Bouchard’s Canadian Division champion team, and his ability to be responsible will give Rocket head coach Jean-François Houle confidence to play him in a deep Rocket lineup.

Mysak has the skill and smarts to play anywhere in the lineup, and although he is likely a winger at the professional level, he has experience at center as well.

His versatility won’t be enough for an NHL look this camp, but he is in a position to leave his business card on the table.

A few weeks ago saying Joshua Roy was under the radar would have been laughable, but after missing the rookie tournament with a hand injury, he is the forgotten man in a world of other prospects.

His great rookie camp a year ago earned him an invite to the NHL dance, and this year he should play at least one pre-season game. The forward situation is such that there aren’t many spots, but with question marks surrounding Sean Monahan and Jonathan Drouin to start camp, someone has to take those spots and Roy is as possible as anyone.

The fact that it is the CHL or NHL for him might allow him to stick around camp a bit longer, but these few weeks will give an indication of where he is on the pecking order when it comes to a deep group of forwards.

Every year there’s a player on an AHL contract who stands out at camp. Last year, Gabriel Bourque had people asking whether an NHL contract was in his future, as an example.

Martel, 27, said at the end of last year that while he still wants to make the NHL, he is realistic with his situation. After 15 points in 15 playoff games, including a four-goal game in the Rocket’s playoff run, Martel is a guy who can be that player who sticks around just a bit longer.

I don’t think it’s realistic to say that an NHL contract for him is imminent, but he is sure to play a leadership role in Laval, and this is as good an opportunity as any to show the new Canadiens leadership and coaching group what he can provide in an NHL camp.

It’s a very congested forward group, and it will be interesting to see if Martel gets a chance to play pre-season games and bring the same energy that made him a fan favorite in Laval.

Another player in this category is Brandon Gignac who has the rare security of a two-year AHL deal. If he gets a chance to unleash his speed, he can provide some memorable moments in the pre-season.

The conventional wisdom is that Primeau, armed with a new three-year one-way contract, is primed to be the starter for the Laval Rocket and lead that team towards a Calder Cup. Players, however, aren’t wired that way. Primeau would rather be in the NHL, and not only that, but he wants to show that he can perform better at the NHL level than he did during a disastrous season last year.

The waiver situation being what it is, I don’t think Primeau is in a position to beat out Jake Allen or Samuel Montembeault. Coming off of a great playoff performance, it will be interesting to see how he does against NHL players, even if it is just pre-season.

There will be a lot of players with good camps who will be sent to the AHL just because of the numbers game, but Primeau has a chance to change the perception of him, especially when it comes to his performance wearing the Canadiens jersey.

On the flip side of this is Kevin Poulin, the person who outperformed Primeau in Laval last season and started Game 1 of the Calder Cup Playoffs.

When the Canadiens were struggling in goal and with injuries, you wondered whether Poulin would get that call to the NHL and get an NHL contract. With Carey Price out indefinitely this season, Montreal only has three goalies under NHL contract, meaning an injury to Allen, Montembeault, or Primeau will put them in a tough spot.

They can go out and acquire a player like Andrew Hammond a year ago, or they can reward a guy like Poulin from within.