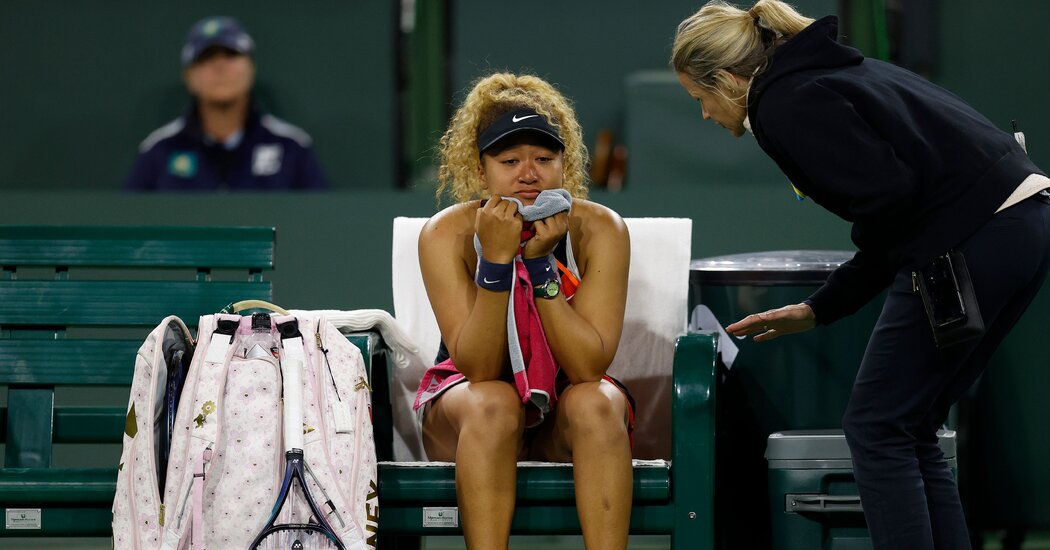 INDIAN WELLS, Calif. – Crying on court after being heckled by a spectator, Naomi Osaka was knocked out of the BNP Paribas Open in the second round on Saturday.

Osaka, the Japanese star who has struggled with her mental health and with ambivalence towards professional tennis, spoke to the crowd directly at her request after her 6-0, 6-4 defeat against the No. 21 seed, Veronika Kudermetova.

Fighting for composure, Osaka explained that the heckler, who shouted, “Naomi, you suck!” after the opening game, had made her flash back to footage she had seen of Venus and Serena Williams being booed and jeered at Indian Wells during the 2001 tournament.

“To be honest, I’ve gotten heckled before, and it didn’t really bother me,” Osaka said. “But, like, heckled here? I watched a video of Venus and Serena getting heckled here, and if you’ve never watched it, you should watch it.

“And I don’t know why, but it went into my head, and it got replayed a lot,” she continued, apparently referring to Saturday’s match.

Osaka then thanked the crowd, slung her bag over her shoulder and left the court.

Osaka, a former No. 1 whose ranking has dropped to No. 78, was unseeded this year at Indian Wells, where she made a major breakthrough by winning her first WTA singles title in 2018 as an unseeded player. She has gone on to win four Grand Slam singles titles, most recently at the 2021 Australian Open. But since then, she has played infrequently and has not won another tour event, or even reached another final. Saturday’s defeat was her latest setback, and her latest vulnerable moment in the public eye.

“I feel like I’ve cried enough on camera,” she said in a teary post-match remarks to the crowd. She skipped her post-match news conference.

After the tension in 2001, the Williams sisters did not return to the tournament in Indian Wells for more than a decade, with Serena only coming back in 2015 and Venus in 2016. Serena, now 40, and Venus, now 41, are still active players, but neither is participating in the event this year.

During the Williams sisters’ early years as professionals, there was speculation on tour that their father and co-coach, Richard Williams, was prearranging the results of their matches against each other. At Indian Wells in 2001, the Russian player Elena Dementieva spoke about her suspicions publicly after losing to Venus Williams in the quarterfinals.

When Venus withdrew from the semifinal against Serena only minutes before it was to begin, citing tendinitis in her right knee, the crowd responded by booing. Dementieva later insisted her comment had been a joke, and the sisters and Richard Williams denied that any of their match results were prearranged.

But two days later, Serena Williams was booed throughout the tournament final, and Richard Williams, who was watching from the stands with Venus, said he was subjected to racial slurs. Serena Williams won in three sets but has said that the experience was traumatic and “haunted” her and her family for years.

The circumstances on Saturday seemed vastly different. Osaka, 24, had ample support from the overwhelming majority of the crowd. There were several thousand fans scattered throughout the stands in the 16,100-seat main stadium on a chilly evening, and after the heckler’s insult – clearly audible on the television broadcasts of the match – there were loud cheers for Osaka’s few winners in the opening set and even more support for her down the stretch as she raised her game.

Osaka defeated former US Open champion Sloane Stephens in three sets in the first round on Thursday. But she faced another tough test in Kudermetova, a powerful Russian on the rise whom she had never played in singles.

“I want to play that match because I want to see what I can improve, what I need to improve,” Kudermetova said. But the match ended up illustrating more about Osaka’s vulnerabilities and tennis weaknesses than about Kudermetova’s strengths.

Osaka took a three-month break from the game after losing to Leylah Fernandez in the third round of last year’s US Open, explaining that she was no longer finding joy in competing. She returned to the tour in Australia in January with a more upbeat mind-set but was beaten in the third round of the Australian Open by the American Amanda Anisimova.

Indian Wells was only Osaka’s third tournament in six months, and while she conceded that she needed more matches to get back “into the swing of things” she got only two more here.

Kudermetova broke Osaka’s serve in the opening game, and the spectator’s shout came as Osaka prepared to return serve. She approached the umpire chair, Paula Vieira Souza, and appeared to ask about having the spectator ejected, but Souza politely demurred. Kudermetova held serve, and Osaka began to tear up as she prepared to serve the next game.

“I didn’t hear what the lady said because I really so focus on my game, on my service game,” Kudermetova said of the heckler. “I didn’t understand what she said, but after that moment, I saw that Naomi, she started to cry.”

After Osaka was broken again, she had another extended conversation with Souza, who reassured her that if the spectator heckled her again, the person would be identified and ejected. Osaka asked if she could use the referee’s microphone to address the crowd directly.

Souza declined, and the WTA Tour supervisor Clare Wood was called to the court and discussed the matter with Osaka as the player sat on her chair.

When play resumed, Osaka continued to struggle to find her range and lost the set at love. Wood spoke with Osaka again before the start of the second set, which was much more competitive. But Kudermetova broke Osaka’s serve in the seventh game and went on to close out her victory.

Osaka shook hands with her opponent and then waited for Kudermetova to give the customary victor’s on-court interview before walking to the microphone herself. Though Osaka thanked the crowd in her brief remarks, Osaka’s decision to connect her treatment on Saturday to the Williams sisters’ experiences in 2001 was surely unwelcome linkage for tournament organizers.

Andrew Krasny, the on-court interviewer at the BNP Paribas Open, tried to reassure Osaka as she finished her remarks and headed for the exit.