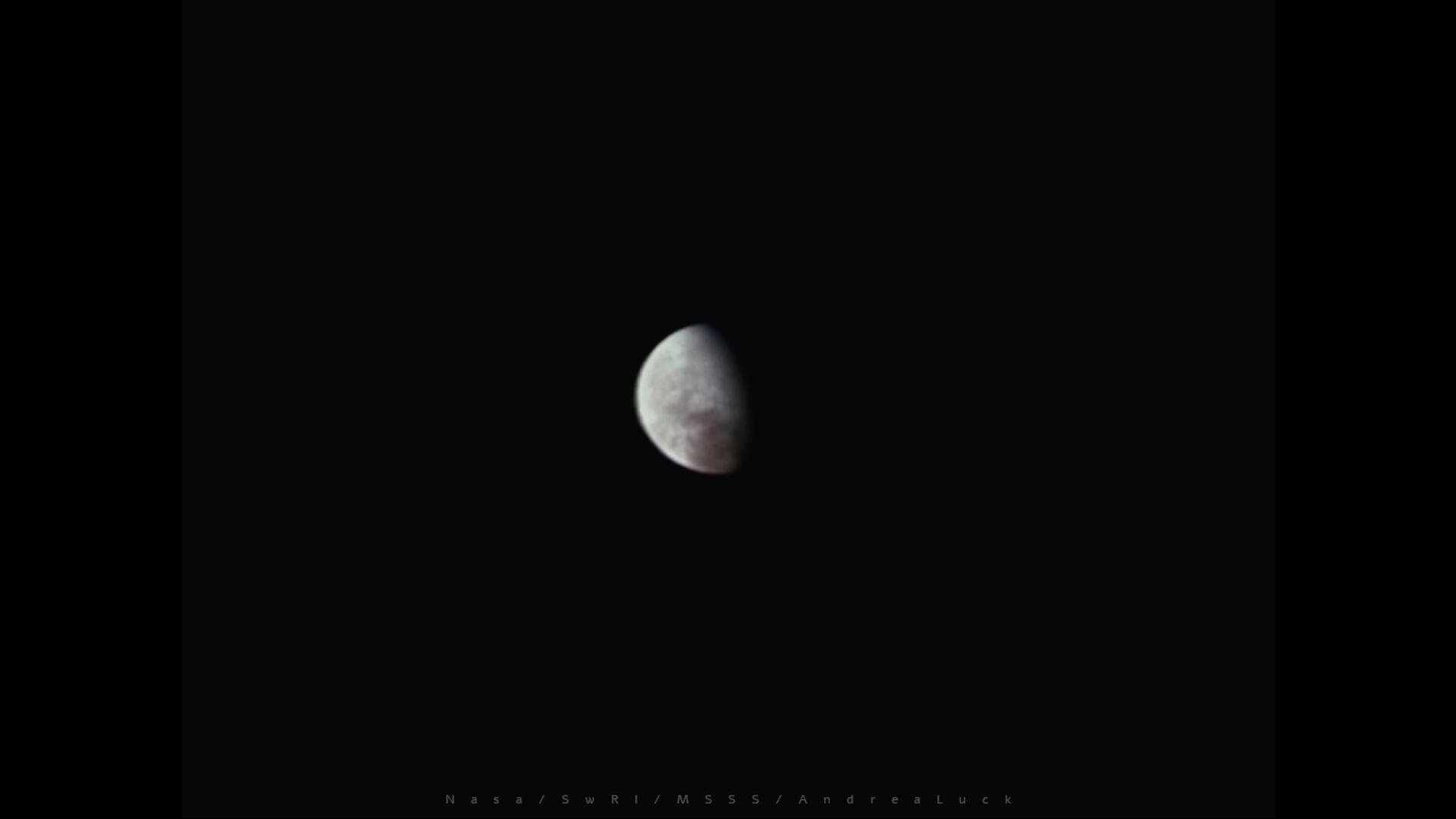 On Thursday, Sept. 29, at 2:36 am PDT (5:36 am EDT), NASA’s Juno spacecraft will come within 222 miles (358 kilometers) of the surface of Jupiter’s ice-covered moon, Europa. The solar-powered spacecraft is expected to obtain some of the highest-resolution images ever taken of portions of Europa’s surface, as well as collect valuable data on the moon’s interior, surface composition, and ionosphere, along with its interaction with Jupiter’s magnetosphere.

Such information could benefit future missions, including the agency’s Europa Clipper, which is set to launch in 2024 to study the icy moon. “Europa is such an intriguing Jovian moon, it is the focus of its own future NASA mission,” said Juno Principal Investigator Scott Bolton of the Southwest Research Institute in San Antonio. “We’re happy to provide data that may help the Europa Clipper team with mission planning, as well as provide new scientific insights into this icy world.”

With an equatorial diameter of 1,940 miles (3,100 kilometers), Europa is about 90% the size of Earth’s Moon. Scientists think a salty ocean lies below a miles-thick ice shell, sparking questions about potential conditions capable of supporting life underneath Europa’s surface.

The close flyby will modify Juno’s trajectory, reducing the time it takes to orbit Jupiter from 43 to 38 days. It will be the closest a NASA spacecraft has approached Europa since Galileo came within 218 miles (351 kilometers) on Jan. 3, 2000. In addition, this flyby marks the second encounter with a Galilean moon during Juno’s extended mission. The mission explored Ganymede in June 2021 and plans to make close approaches of Io in 2023 and 2024.

Data collection will begin an hour prior to closest approach, when the spacecraft is 51,820 miles (83,397 kilometers) from Europe.

“The relative velocity between spacecraft and moon will be 14.7 miles per second (23.6 kilometers per second), so we are screaming by pretty fast,” said John Bordi, Juno deputy mission manager at JPL. “All steps have to go like clockwork to successfully acquire our planned data, because soon after the flyby is complete, the spacecraft needs to be reoriented for our upcoming close approach of Jupiter, which happens only 7 ½ hours later.”

The spacecraft’s full suite of instruments and sensors will be activated for the Europa encounter. Juno’s Jupiter Energetic-Particle Detector Instrument (JEDI) and its medium-gain (X-band) radio antenna will collect data on Europa’s ionosphere. Its Waves, Jovian Auroral Distributions Experiment (JADE), and Magnetometer (MAG) experiments will measure plasma in the moon’s wake as Juno explores Europa’s interaction with Jupiter’s magnetosphere.

MAG and Waves will also search for possible water plumes above Europa’s surface. “We have the right equipment to do the job, but to capture a plume will require a lot of luck,” said Bolton. “We have to be at the right place at just the right time, but if we are so fortunate, it’s a home run for sure.”

Juno’s Microwave Radiometer (MWR) will peer into Europa’s water-ice crust, obtaining data on its composition and temperature. This is the first time such data will have been collected to study the moon’s icy shell.

In addition, the mission expects to take four visible-light images of the moon with JunoCam (a public-engagement camera) during the flyby. The Juno science team will compare them to images from previous missions, looking for changes in Europa’s surface features that may have occurred over the past two decades. These visible-light images will have an expected resolution better than 0.6 miles (1 kilometer) per pixel.

Although Juno will be in Europa’s shadow when closest to the moon, Jupiter’s atmosphere will reflect enough sunlight for Juno’s visible-light imagers to collect data. Designed to take images of star fields and search for bright stars with known positions to help Juno get its bearings, the mission’s star camera (called the Stellar Reference Unit) will take a high-resolution black-and-white image of Europa’s surface. Meanwhile, the Jovian Infrared Auroral Mapper (JIRAM) will attempt to collect infrared images of its surface.

Juno’s closeup views and data from its MWR instrument will inform the Europa Clipper mission, which will perform nearly 50 flybys after it arrives at Europa in 2030. Europa Clipper will gather data on the moon’s atmosphere, surface, and interior—information that scientists will use to better understand Europa’s global subsurface ocean, the thickness of its ice crust, and possible plumes that may be venting subsurface water into space.