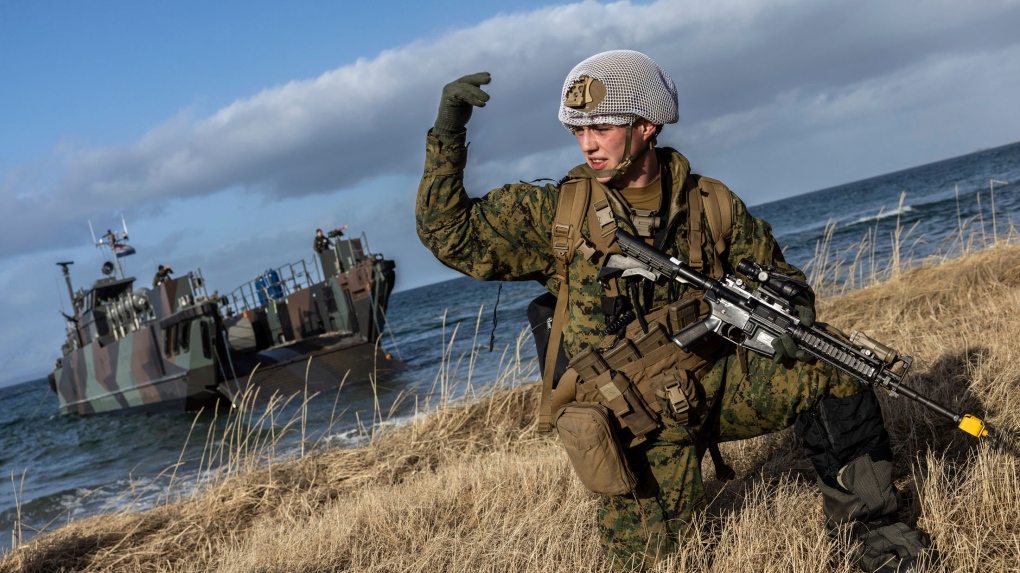 The first surprise, for the Finnish conscripts and officers taking part in a NATO-hosted military exercise in the Arctic this spring: the sudden roar of a US Marine helicopter assault force, touching down in a field right next to the Finns’ well-hidden command post.

The second surprise: Spilling out of their field headquarters, the Finnish Signal Corps communications workers and others inside routed the US Marines — the Finns’ designated adversary in the NATO exercise and members of America’s professional and premier expeditionary force — in the mock firefight that followed.

Finnish camouflage for the Arctic snow, scrub and scree likely had kept the Americans from even realizing the command post was there when they landed, Finnish commander Lt. Col. Mikko Kuoka suspected. “For those who years from now will doubt it,” Kuoka, modestly stunned by the outcome of the random skirmish, wrote in an infantry-focused blog recording the outcome, of an episode he later confirmed for The Associated Press. “That actually happened.”

As the exercise made clear, NATO’s addition of Finland and Sweden — what President Joe Biden calls “our allies of the high north” — would bring military and territorial advantages to the Western defense alliance. That’s especially so as the rapid melting of the Arctic from climate change awakens strategic rivalries at the top of the world.

In contrast to the NATO expansion of former Soviet states that needed big boosts in the decades after the Cold War, the alliance would be bringing in two sophisticated militaries and, in Finland’s case, a country with a remarkable tradition of national defense. Both Finland and Sweden are in a region on one of Europe’s front lines and meeting places with Russia.

Finland, defending against Russia’s Soviet invasion on the eve of World War II, relied on fighters on snowshoes and skis, expert snow and forest camouflage, and reindeer transporting weapons.

Russian President Vladimir Putin’s invasion of Ukraine in late February, along with his pointed reminder about the Kremlin’s nuclear arsenal and his repeated invocation of broad territorial claims stemming from the days of the Russian Empire, have galvanized current NATO nations into strengthening their collective defenses and bringing on board new members.

Finland — until 1917 a grand duchy in that empire — and Sweden abandoned long-term national policies of military nonalignment. They applied to come under NATO’s nuclear and conventional umbrella and join what is now 30 other member states in a powerful mutual defense pact, stipulating that an attack on one member is an attack on all.

Putin justified his invasion of West-looking Ukraine as pushing back against NATO and the West as, he said, they encroached ever closer on Russia. A NATO that includes Finland and Sweden would come as an ultimate rebuke for Putin’s war, empowering the defensive alliance in a strategically important region, surrounding Russia in the Baltic Sea and Arctic Ocean, and crowding NATO up against Russia’s western border for more than 1,300 kilometers .

Biden has been part of bipartisan US and international cheerleading for the two countries’ candidacies. Reservations expressed by Turkey and Hungary keep NATO approval from being a lock.

Russia in recent years has been “rearming up in the north, with advanced nuclear weapons, hypersonic missiles and multiple bases,” NATO Secretary-General Jens Stoltenberg said this month. “Russia’s threats, and Russia’s military build-up, mean that NATO is strengthening its presence in the north.’

Finland and Sweden would bring a lot to that mix. But they’re not without flaws.

Both countries downsized their militaries, cut defense funding and closed bases after the collapse of the Soviet Union lulled Cold War-era fears. As of just five years ago, Sweden’s entire tiny national defense force could fit into one of Stockholm’s soccer stadiums, a critic noted.

But as Putin grew more confrontational, Sweden reinstated conscription and otherwise moved to rebuild its military. Sweden has a capable navy and a high-tech air force. Like Finland, Sweden has a valued homegrown defense industry; Sweden is one of the smallest countries in the world to build its own fighter jets.

Finland’s defense force, meanwhile, is the stuff of legend.

In 1939 and 1940, Finland’s tiny, miserably equipped forces, fighting alone in what became known as the Winter War, made the nation one of the few to survive a full-on assault by the Soviet Union with independence intact. Over the course of an exceptionally, deathly cold winter, Finnish fighters, sometimes cloaked in white bedsheets for camouflage and typically moving unseen on foot, snowshoes and skis, lost some territory to Russia but forced out the invaders.

Finns were responsible for up to 200,000 fatalities among invading forces versus an estimated 25,000 Finns lost, recounted Iskander Rehman, a fellow at Johns Hopkins’ Henry A. Kissinger Center for Global Affairs..

It helped fuel a Finnish national credo of “sisu,” or grit. Finnish Winter War veterans were recruited for the US Army’s winter warfare training, Rehman noted.

Finland’s constitution makes rallying to the national defense an obligation of every citizen. Finland says it can muster a 280,000-strong fighting force, built on near-universal male conscription and a large, well-trained reserve, equipped with modern artillery, warplanes and tanks, much of it US

The US and NATO are likely to increase their presence around the Baltic and Arctic with the accession of the two Scandinavian countries.

“Just looking at the map, if you add in Finland and Sweden, you essentially turn the entire Baltic Sea into a NATO lake,” with just two smaller bits of Russia lining it, said Zachary Selden, a former director of the NATO Parliamentary Assembly’s defense and security committee who is now a national security expert at the University of Florida.

Selden predicts a greater NATO presence in the Baltics as a result, perhaps with a new NATO regional command, along with US military rotations, although likely not any permanent base.

Russia sees its military presence in the Arctic as vital to its European strategy, including ballistic missile submarines that give it second-strike capability in any conflict with NATO, analysts say.

The Arctic is warming much faster under climate change than the Earth as a whole, opening up competition for Arctic resources and access as Arctic ice vanishes.

Russia has been building its fleet of nuclear-powered icebreakers, aiming to escort expected future commercial shipping traffic through the melting Arctic, “as a way to create this toll road for transit,’ said Sherri Goodman, a former US first deputy undersecretary of defense , now at the Wilson Center’s Polar Institute and at the Center for Climate & Security.

Goodman points to future threats NATO will need to be able to deal with as the melting Arctic opens up, such as the kind of shadowy, unofficial forces Russia has used in Crimea and in Africa and elsewhere, and the increased risk of a hard-to -handle Russian nuclear maritime accident.

NATO strategy increasingly will incorporate the strategic advantage Finland and Sweden would bring to such scenarios, analysts said.

Kuoka’s US counterpart in NATO’s Arctic exercise this spring, Marine Lt. Col. Ryan Gordinier wrote in an email provided through Marine spokespeople that he and his Marines were “impressed” by the Finnish infantry’s ability to reach otherwise unreachable positions by foot, snowshoe and ski, and to move undetected over snow.

It “made us pause” — and likely would any real adversary as well, Gordinier wrote.