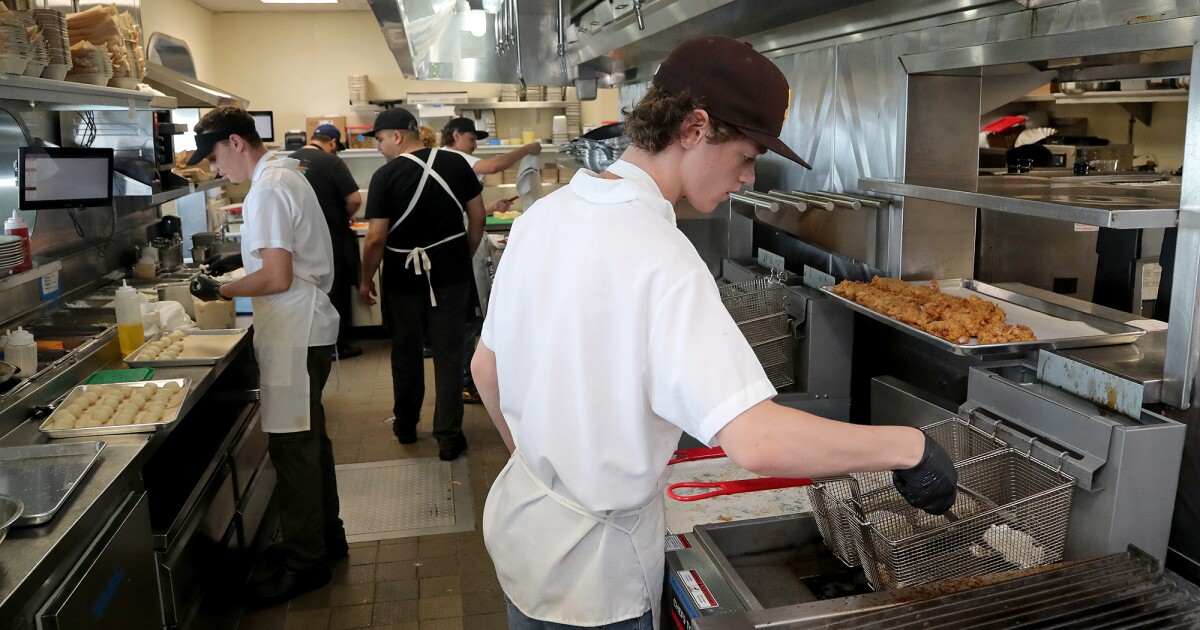 To chef Jason Witzl, like countless other kids who grew up in the Southland, summer meant spending time at Huntington Beach.

“Every summer you ended up at the end of that pier, watching fishermen and having a milkshake and then going to the beach,” said Witzl, who grew up in Whittier. “You would drive all the way down Beach Boulevard, go right to Dairy Queen and then hit the beach.”

Witzl hopes residents and tourists alike will be able to enjoy his newest twist at the iconic spot.

For more than a year the old Ruby’s Diner building remained vacant, as the location closed its doors for good in early 2021 after filing for bankruptcy. But the coveted spot at the end of the Huntington Beach Pier is reimagined, has new ownership and is a welcoming business.

“We’re going to try and get it to about 22 [items],” Witzl said. “It is a unique style of dining experience, where it’s going to be counter service. You’ll walk up and order everything, and we’re going to send it out as ready. Everything is going to be family style.”

A formal grand-opening ribbon-cutting ceremony is planned for 11 am Tuesday. Witzl, who has opened three restaurants in the Long Beach area and has a high-end butcher/seafood shop opening in Coronado soon, is excited for the opportunity.

“It’s pretty flattering and overall exciting to be able to reinvent that space into something that’s a little more with the times and kind of the movement of Huntington Beach,” he said. “It’s probably one of the most exciting things I’ve done since our first place [Ellie’s Italian restaurant].”

John Cunin, who represents ownership group RAV, said the plan is to remain respectful to Surf City’s heritage. The restaurant is named after Delbert “Bud” Higgins and Gene Belshe, who were two of the city’s first lifeguards in the 1920s. They went on to become fire chief and assistant police chief, respectively.

Higgins is also credited as the first surfer to “shoot” the Huntington Beach Pier — ride between the support pilings underneath without falling.

“We want to be part of the community, and I think it starts with respecting the history,” Cunin said. “This homage to Bud and Gene is all about that.”

Local artist Melissa Murphy, also known as Melissa Murals, provided some decorations for the inside of the space.

The new ownership group, which also holds leases on the Malibu and Oceanside piers, plans to keep tinkering. Cunin said they could open up some of the windows inside the facility, to get the sounds and smells of the ocean pumping through rather than the current hermetically sealed vibe. Additionally, he said they would like to figure out some creative ways to offer some 360-degree views on the second floor of the restaurant.

“It’s all a concept now, and it’s going to take months,” he said. “But we didn’t want to have that space miss another season, and the Vans US Open of Surfing and all of what’s going on for 2022. Sometime next year we will fold up this concept, go into a construction phase and reopen with an even more ambitious design and concept.”

Rafael Mendez of Phoenix, his two sisters and a friend enjoyed burgers and fries on the steps of Bud & Gene’s on Thursday. Mendez said they were expecting to grab them from Ruby’s on vacation as usual — “it was our go-to,” he said — but he also enjoyed the new digs.

“The burgers were pretty good, honestly,” Mendez said. “The sauce that comes with the fries is different, but it’s good … We like the environment here. I’m not so picky with my food, as long as it’s edible.”

Of course, Witzl aspires to much more than just “edible.” He said he gets plenty of foot traffic from Huntington Beach and Seal Beach at his Long Beach restaurants, and he hopes the reverse will also be true.

“It’s pretty cool to have each end of the spectrum in one location,” he said. “It’s whatever commitment you want it to be. You can sit down and have some chili prawns or a Baja-style whole fish, or you can have a burger and a soft-serve to go. It’s really up to you.”

Support our coverage by becoming a digital subscriber.