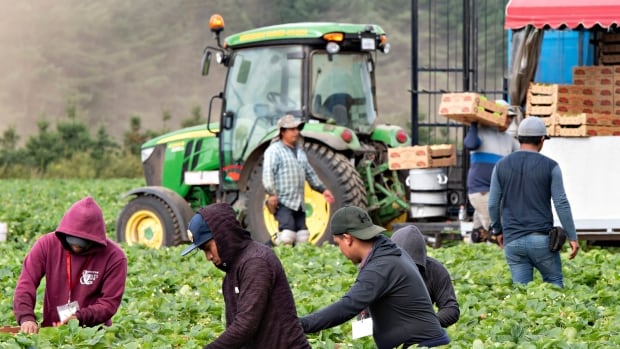 The number of temporary foreign workers in Quebec has climbed more quickly than anywhere else in Canada, but experts say resources to prevent exploitation haven’t kept up, leading to more workers deserting farms for illegal work elsewhere in Quebec or across the border.

The provincial government under Coalition Avenir Québec’s François Legault, who is seeking re-election on Oct. 3, has refused to increase immigrationdespite a critical labor shortage set to only get worse in a booming economy with an aging population and declining birth rate.

Instead, it has struck deals with Ottawa to allow Quebec employers to triple the number of migrant workers by 2023 — a notoriously precarious workforce whose well-being depends on the goodwill of their employers.

“It’s deeply problematic because you’re solving structural economic issues and structural issues in the labor force with a program that brings in people with a very clearly secondary set of rights,” said Edward Dunsworth, an assistant professor of history at McGill University, whose book Harvesting Labour: Tobacco and the Global Making of Canada’s Agricultural Workforce has just been published by McGill-Queen’s University Press.

By the estimate of one migrant workers’ advocacy group, that number could rise to 90,000 by 2027.

While temporary foreign workers remain the backbone of eastern Canada’s agricultural sector, they are now propping up all kinds of industries, in jobs that are not just seasonal, from furniture manufacturing to food processing to health care.

Despite the program’s meteoric expansion, resources in Quebec have hardly kept pace. Researchers say that is pushing a growing number of workers into going underground, and increasingly, paying smugglers thousands of dollars to take them across the border into the United States.

Struggling to keep up

“Quebec has fewer aid organizations and networks to help workers than what you can find in Ontario,” said Guillermo Candiz, an assistant professor at Université de l’Ontario français in Toronto who has done extensive field research in the Quebec City region and in Mexico , where he spent seven months with migrant workers’ families.

Candiz sits on the board of directors of a migrant farm workers’ support network, the Réseau d’aide aux travailleuses et travailleurs migrant agricoles du Québec (RATTMAQ), which recently opened new offices in Sherbrooke, Quebec City and Rivière-du-Loup and is planning to open another soon in St-Jérôme.

Although its network has grown, RATTMAQ is struggling to take on every complaint.

Co-founder Michel Pilon said the increase has been “staggering.” RATTMAQ took on 76 legal cases related to migrant worker complaints in 2020-2021. In the following 12-month period, that number jumped to 578.

“The demand is enormous compared to the amount of resources we have,” Pilon acknowledged. “More and more, we have to choose.”

The number of complaints filed by temporary foreign workers to Quebec’s workplace health and safety board (CNESST) has also risen dramatically, according to statistics obtained by CBC through an access to information request. That number went from 10 in 2017, the year the agency created a separate category for them, to 146 in 2021 and to 143 by May 31, not yet halfway through 2022.

For Pilon, the increase in complaints is not entirely a bad thing, because it means more temporary migrant workers are ready to take a stand and advocate for themselves.

‘They said I was taking the workers’ side’

Federico Alias, who was hired as a human resources manager at a farm north of Montreal last spring, said many workers have reason to complain. Alias ​​said he observed the power imbalance between temporary workers and their employer first hand.

Alias ​​was fired six weeks into the job, not long after setting up health and safety committees to ensure Quebec labor laws were being respected.

Alias ​​said the farm’s managers and owners often reminded the workers that hundreds of others in their home countries wanted their jobs, dismissing their concerns about working and living conditions.

He said the way the owners treated the workers and spoke about them condescendingly revealed just how much power over those workers the system gives employers.

“I didn’t think that in 2022, we still functioned that way — with threats and fear. The guys had stomach aches, they were so worried,” Alias ​​said. “They are completely tied to their employer.”

One of the owners of the farm in question said Alias ​​was fired because he wasn’t efficient enough, but said that the committees he set up remain in place and are now managed by two other human resources employees.

The farm operator acknowledged workers often feel uncomfortable speaking up, out of fear of being sent home or not being called back for another season, but he said the farm tries to mitigate those situations by encouraging workers to open up to the human resources representatives.

He said about 10 workers have left the farm this season, apparently to go to the US — some so soon after arriving that he believed they intended to do so from the start. He said the farm held meetings to discourage its workers from falling into the hands of smugglers, informing them of the risks they faced if they tried to cross the border illegally.

At the root of the program’s inequities is the fact that workers’ permits are tied to their employer, according to more than half a dozen migrant workers’ advocates and the researchers CBC News spoke to.

In 2019, the federal government made it possible for temporary foreign workers in vulnerable situations to obtain open work permits allowing them to work for other employers, but the permits are difficult to obtain without the help of an organization.

What’s more, they expire after one year and are non-renewable. Once the original contract runs out or is terminated, a worker can no longer apply for an open permit.

That is what happened to one Guatemalan worker who left the farm where he was employed after the pressure from his bosses to work faster became too much.

“Truthfully, I couldn’t stand the work anymore,” said the worker, whom CBC has agreed not to name because of the precariousness of his situation. He no longer has a permit, nor is he eligible under the rules to apply for one.

A friend told him about some under-the-table construction work he could do elsewhere in the province and, desperate for any other income, he accepted it.

“It scares me, but I took the risk because of the situation on the farm,” the worker said in a WhatsApp message.

Candiz and Pilon both believe the fact that migrant workers can’t change employers accounts for the rise in underground networks.

Fernando Borja, the director of FERME, the Quebec agency that recruits most of the province’s temporary foreign agricultural workers, said 220 migrant workers have left farms this year, including 10 over one recent weekend. All or most are believed to have attempted to cross the border or taken up illegal work.

Borja said he expects the count to surpass 300 this year: three times more than in 2019.

“It’s a major problem for us,” Borja said. “It’s clearly something that is well-organized and that is new. We didn’t have this before.”

RCMP and the Canadian Border Services Agency both turned down CBC’s request for interviews, saying they could not comment on open investigations and had no statistics of their own to share.

Data published by United States Customs and Border Protection, however, confirms there has been a significant spike in interceptions of Guatemalan nationals in states bordering Quebec over the summer. As of Sept. 3, there have been 299 interceptions in 2022, compared to 149 in all of 2021 and 127 in 2020.

The US federal agency calls these interceptions “encounters” and says they include arrests of people who may end up in the American immigration detention system or may be sent back to Canada.

Candiz said he is personally aware of several workers who have crossed the border this summer.

There are several reasons why these workers, many of them from Guatemala, are motivated to go to the US, he said, including reuniting with family or being seduced by the idea of ​​there being more opportunities there.

“If the workers had the power to change employers, to be able to stay, they would probably decide to stay in Canada and not take the risk,” Candiz said.

Pilon said Quebec will only see more foreign workers desert their jobs, whether it be to leave the country or work elsewhere, unless it does more to prevent exploitation.

While guest worker programs are overseen by the federal government, Pilon says Quebec needs to do more to protect the people employed through them.

Quebec is one of the few provinces with separate immigration powers that give it say over who it allows into the province and who can get permanent residency. If Quebec called for work permits that allowed foreign workers to change employers within certain sectors of the economy, Pilon believes it could work something out with Ottawa.

He said for years, RATTMAQ has also been calling for separate legislation regulating the housing of temporary foreign workers, just as it does for remote forestry workers.

“Why wouldn’t we have one for [migrant] workers? Because we’re discriminating? Because they’re not Quebecers?”

He says having open work permits alone would solve about 60 percent of the cases RATTMAQ deals with.

Quebec relies more heavily than other provinces on workers recruited by private agencies for contracts of up to 24 months, rather than seasonal workers whose home governments have signed agreements with Canada and consequently better monitor their recruitment and working conditions and limit contracts to eight months, according Candiz’s.

“We must continue to do more and remember that temporary foreign workers have the same rights as Quebec workers. This is an absolutely non-negotiable concept for us,” Talbot wrote in an email.

The Quebec Liberal Party said, if elected, it would increase the number of permanent immigrants allowed into Quebec to 70,000 in 2022. It says it would also create agreements with the different regions of the province for them to “determine their own immigration needs.”

Quebec Solidaire said it is “resolutely” in favor of open permits by sector. It would like the province to have control over its own temporary foreign worker program and said that if it forms a government, it will increase workplace inspections by the CNESST, offer French courses at work, and allow all temporary workers or students to apply for permanent residency.