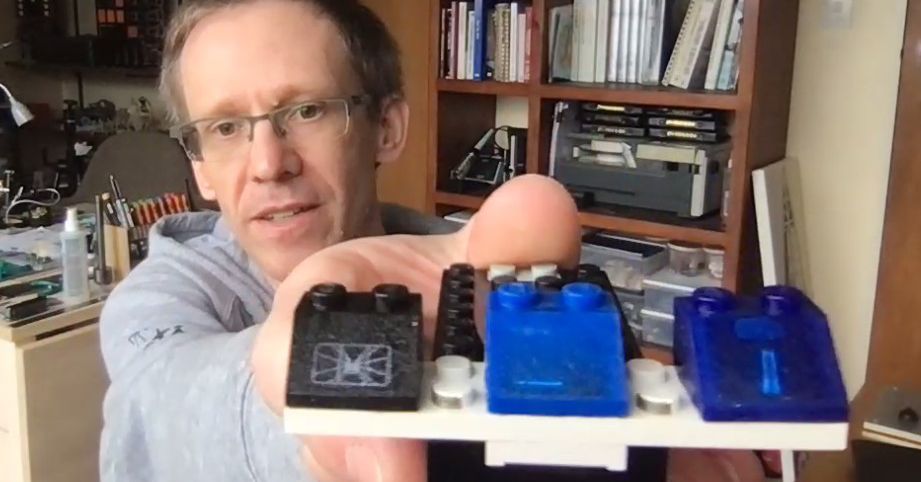 James Brown loves building weird displays. Like animatronic skulls, or mechanical bit-flipping cellular automatons. Or, in this case, an entire computer inside a mock Lego brick.

Not just any brick, either. I’m talking about the classic sloped Lego computers from our childhood spaceships, now brilliantly brought to life. They display fake radar scans, scrolling text, even an interactive homage to the Death Star trench run targeting computer that moves when you touch the exposed Lego studs.

James Brown bought the tiniest, cheapest OLED screens he could find. He wanted to build a keyboard, but his mind’s eye soon saw an even more perfect combination. He tells The Verge he probably won’t sell them — at least not without legal consultation and a small enough battery! #LEGO

Incredibly, the whole thing is powered by actual Lego bricks, too — the vintage 9V battery box and bricks with electrical contacts that Lego discontinued back in the ’90s. It’s enough to power a 72 x 40-pixel OLED screen and an STM32 microcontroller with a 48MHz Arm Cortex-M0 processor and 16K of flash. And those graphics you see? Apart from Doomwhich was a live video stream to the brick, they’re all procedurally generated. He wrote the programs for this tiny computer himself.

None of this was Brown’s original plan, but in an interview with The Verge, he makes it sound like it came together so well that it’s almost begging to be manufactured. Yes, I’m telling you there’s a chance you might actually touch one of these someday.

Last year, the Weta Workshop graphics engineer (yes, that Weta Workshop) was just browsing AliExpress when he spotted some incredibly small and cheap 0.42-inch OLED screens. “That’s about the size of a keycap,” he thought. He’d build a mechanical keyboard with a screen under each key, he told himself, but the project was slow going. “I sort of ordered a batch of screens just to have them sitting there making me feel guilty,” he says.

But when a Game Boy for ants arrived on his doorstep this May, he began to ponder: what if each key had a processor inside, too? Later that same day, he suddenly realized he’d already seen a computer that size. Not a working one — a piece of Lego.

So he sketched it out, and was surprised to see his idea might actually work. “I spent a little bit of time in Fusion, just kind of looking at where things would fit inside a brick, just making sure it was actually feasible and it only just… you know that screen is really crammed in there, right?” There’s only 0.1mm between the screen and the front surface of the brick.

He drafted up a circuit board of the maximum size that would fit and, in a single day, placed all the basic components and sent his design to a board manufacturer on a whim. He paid just $40, including shipping, for five tiny boards.

“It was meant to be kind of a throwaway gag; I wasn’t expecting to have to make it particularly manufacturable,” he says.

But when the boards arrived, he couldn’t believe how well they came out. “It’s absolutely insane how cheap and easy this stuff is, you know, to custom-design a new computer,” he says. The hardest part was simply soldering on a pair of battery contacts to the bottom.

Stick it inside a translucent Lego brick and you’re done, right? No — Brown decided to cast his own bricks out of translucent resin, too.

Originally, they were pretty crude: “It was literally a Lego brick in a Lego pot that I poured silicone on to make the mold and then I just kind of shoved it in there, poured the resin in, put something on top to hold it down, and hoped for the best.” He also had to fill the brick’s cavity with soft silicone, so resin wouldn’t fill the spot where the electronics needed to go.

After his first video went viral, though, he didn’t leave it at that. He ran a pair of wires up to the insides of each stud as a crude touch sensor — “the processor counts how long it takes to pull high via a resistor,” he says — and coded the X-Wing targeting computer and an Elite ship renderer in C to display their array of mesmerizing low-poly wireframes with a press.

He painted on a black lacquer to get rid of some of the glow, too, although he’s actually quite happy with Lego’s stippled finish. “The texturing on the Lego brick does a really good job of antialiasing.”

And then, he got serious.

On Zoom, Brown shows me the second generation — a new three-dimensional circuit board assembly designed to use all the space inside the brick. It’s got built-in battery contacts, a USB port for programming instead of the old serial debugging pins, and capacitive touch hardware baked into the board itself. He says it can reliably detect a finger moving around an entire region above the brick.

And because he’s not satisfied with mere streaming Doom to the STM32 processor as a video over those debugging wires, he just recently redesigned the entire board to fit a Raspberry Pi RP2040 microcontroller, which could actually play Doom too. And he says there may still be enough space to fit an IMU for motion controls. Me, I can’t wait to see Lego airplanes flying around a room with a working attitude gyro.

And now, the answer to the question you’ve all been waiting for: will he take your money in exchange for one of these bricks?

He isn’t ruling it out — but definitely not yet.

“This is really not in any state to suggest that this is going to be a product; I would not want people to get in touch with me suggesting money for a pre-order, because that is not going to happen,” he says.

He does plan to produce some of them for friends to tinker with, but he’s just not sure yet about manufacturing, certification, licensing, and above all, the blessing or disfavor of The Lego Group itself. Clearing it with Lego, or at least “making sure that I’m not going to get the weight of Lego on top of me” is the hardest problem, he says. “There’s a difference between doing something that is acceptable and being able to actually fight if they decide to throw their weight around.” Obviously, he doesn’t plan to sell any bricks that literally say “Lego” on their studs — his Friday tweet shows a brick that ditches the logo.

He also wants to find and fit a rechargeable battery before he’d consider manufacturing, because not everyone has late ’80s / early ’90s Lego electronics boards just sitting in a bin.

If you’re reading this, Lego, I sincerely hope you’ll let him go all the way. When you work with the community, the results are among the best products you’ve ever made.