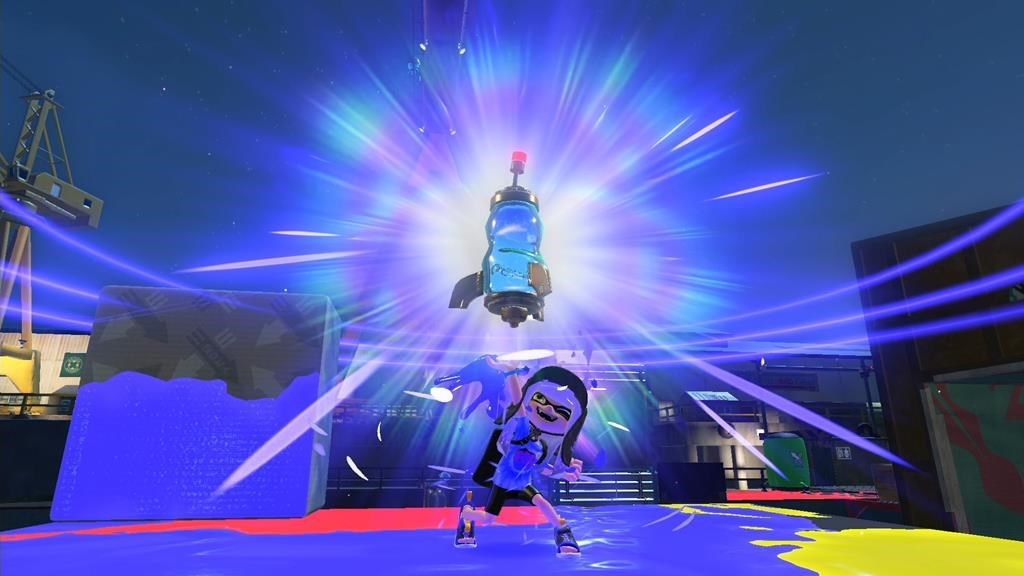 Running through a pigment-splattered abandoned warehouse, you turn to see a stylishly dressed squid-like humanoid with a massive paint roller rise up out of the paint behind you.

Running through a pigment-splattered abandoned warehouse, you turn to see a stylishly dressed squid-like humanoid with a massive paint roller rise up out of the paint behind you.

You try to splat your opponent with your paint gun but you are hopelessly outmatched, covered in ink and sent slinking back to your home base.

This surreal scene, or something approximating it, could await players in their first turf war battle in “Splatoon 3,” the latest installment of Nintendo’s paintball-inspired third-person shooter. And as singular as the scenario sounds, those who have played previous games in the series might find it oddly familiar.

The series made its debut on Nintendo’s Wii U console in May 2015. Praised for its fun, kid-friendly competitive gameplay and its unique post-apocalyptic setting, “Splatoon” quickly joined the ranks of Nintendo’s other heavyweight intellectual properties. Its main characters, the part-human part mollusk Inklings, have crossed over to appear in “Mario Kart 8” and “Super Smash Bros: Ultimate.”

While “Splatoon” made a splash due to its originality, “Splatoon 2,” released for the Nintendo Switch in 2017, tweaked the concepts introduced in the original while adding some small improvements. The recently released “Splatoon 3” follows that same trend. While it is the most complete and polished version of “Splatoon,” it forsakes bold choices in favor of small upgrades to what already exists.

The main draw of “Splatoon 3” is its multiplayer element. Standard battles are called “turf wars” and pit teams of four against each other in one of several available battlegrounds. The goal is to cover the playing surface with as much of your team’s ink color as possible in a three-minute time limit.

It’s a simple but well-executed concept and can lead to some chaotic skirmishes as players bring a variety of paint spewing weapons to the party. Winter sports enthusiasts might appreciate the “curling bomb,” which leaves a trail of paint behind it as it careens through the arena.

While “Splatoon 3” features some new weapons and arenas, the turf wars have remained essentially the same since the series’ inception. There are four other battle modes to provide some variety, but they are not available until the player is able to access the ranked “anarchy battles” later in the game.

Multiplayer can seem unforgiving at first, particularly to those new to Splatoon. Players will have to initially engage their enemies with a bare-bones loadout, and falling prey to better-armed (and better-dressed) opponents is to be expected over the first few matches.

The playing field will level out once your character gains a few levels and can access the shops in the hub city of Splatsville. There you can outfit your avatar with new weapons and clothes. The shirts, shades, kicks and hats on offer provide function in the form of combat abilities to go along with the fashion.

Like previous installments in the series, “Splatoon 3” has a single-player campaign which can be played offline. The solo experience in “Splatoon 3” is a bit meatier than in its predecessors and can take several hours to complete. Rather than the haphazard battles found in mulitplayer, the single-player experience is made up of platform stages, some of which are quite cleverly designed and will require some puzzle-solving acumen to go along with quick reflexes.

Another concept taken from a previous title and given a fresh coat of paint is the co-operative mode “Salmon Run Next Wave,” in which four players team up to battle hideous pisiform creatures called “salmonids” and steal their eggs.

“Splatoon 3” does not have a built-in chat function, which is understandable given the game is meant to be accessible for young gamers. While the lack of a chat eliminates the possibility of players being subjected to potential bullying or toxic behavior through online interactions, it can also make it difficult to coordinate tactics with teammates. Nintendo does offer a separate app for voice chat called SplatNet 3.

For those interested in getting into the series, “Splatoon 3” is an ideal launching point. Even series veterans will appreciate the fine-tuning that has gone into what is becoming one of Nintendo’s most popular franchises. Still, for a series that made such a splash with its debut, it would be nice to see the next “Splatoon” game take a few more risks.

“Splatoon 3” has an ESRB rating of E10+, meaning content suitable for gamers 10 and over, and has a suggested retail price of around $80.

A digital copy of “Splatoon 3” was provided for the purposes of this review.

This report by The Canadian Press was first published Sept. 23, 2022.