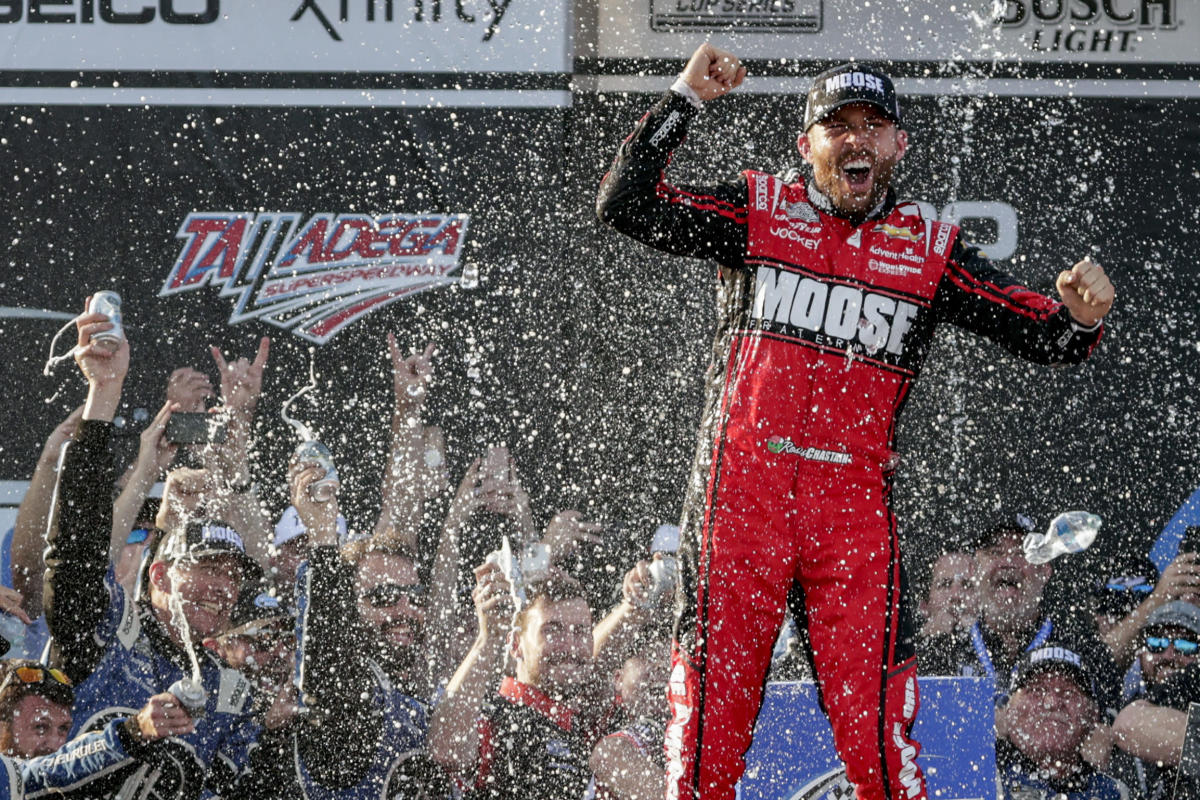 TALLADEGA, Ala. (AP) – Ross Chastain surveyed his situation on the final lap at Talladega Superspeedway and decided his best strategy was to stay right where he was and not make a move for the win.

It got him to victory lane.

Chastain stole the win Sunday when leader Erik Jones moved out of his way to defensively block reigning NASCAR champion Kyle Larson. It cleared the lane for Chastain, who pointed his Chevrolet straight, slipped past Jones and collected his second career Cup victory.

“Holy cow! We didn’t do anything! We just stayed down there! ” Chastain screamed over his radio.

The race was Jones’ to control on the final lap and he knew Larson would make a move for the win. Larson waited until they were exiting the final turn and, in hindsight, Jones said he should have let him go and stayed put with Chastain on his bumper.

“Looking back, I wish I would have stayed on the bottom and let (Chastain) push me,” Jones said. “It is what it is. You’re trying to just win the race. You can only see how much is going on from the seat. You’re trying to make the best decision you can last 1,500 feet. “

Chastain, who scored his first career Cup win last month on the road course at Circuit of the Americas, won for the second time in five races. This one was his first on a superspeedway, where he said he’s usually the driver who makes the wrong moves.

“I’m always the one going to the top early and making the mistake and there at the end it was like eight to go, and I was like, ‘I’m not going up there again,'” Chastain said. “I did that a couple of times, I was like,‘ I’ll just ride on the bottom. I’m not going to lose the race for us. ‘

The eighth-generation watermelon farmer from Florida climbed out of his winning TrackHouse Racing entry through the open roof flaps – like a sunroof – and smashed a watermelon from the roof of the Chevy in celebration.

Chastain also bit into a hunk of watermelon he picked up off the ground, but this time asked on Fox Sports if any seeds had gotten stuck in his beard. He did his entire live television interview following his win in Texas last month with a bit of watermelon rind stuck on his face.

The winning car was the same Chevrolet that Chastain drove to victory on a road course a month ago, but NASCAR’s new Next Gen model makes it easily adaptable to the different circuits on the schedule. The car is also more durable than past models, which cuts down on cautions – even at crash-fest Talladega. The entire third stage Sunday was caution-free.

Chastain and William Byron are the only multiple race winners through 10 Cup events – a quarter of the season. He’s solidly locked into the playoffs with TrackHouse, a second-year team owned by former driver Justin Marks and Pitbull.

Chastain, in his first season with TrackHouse, never imagined so much success out of the gate.

“Are you kidding me? I’ve wrecked myself so many times and gotten into it with guys, ”Chastain said. “Justin Marks and what he laid out for us was ambitious. I had no idea what to expect other than I knew I had my group from last year. (Sponsors are) believing in us. We started the year with a lot of races open (for funding.) We’re almost full now, and it’s because of the vision of Justin Marks.

Austin Dillon finished second for Richard Childress Racing in a 1-2 sweep for Chevrolet, while Kyle Busch was third in a Toyota for Joe Gibbs Racing.

Larson wound up fourth for Hendrick Motorsports, followed by JGR driver Martin Truex Jr. and then finally Jones, who fell all the way to sixth trying to save the win. Michael McDowell in the eighth was the highest-finishing Ford.

Larson was similarly disappointed, believing Sunday was the first time he’s ever been in contention to win on a superspeedway.

“Honestly the first time I’ve had a legit shot at winning a plate race in the Cup series, so happy about that,” Larson said. “But when you were that close – and I was in the exact position I wanted to be in, I didn’t want to be leading – I felt like I did a good job with patience and stuff. Just made one small mistake there and it costs me one. ”

Roger Penske was at the track seeking a second Team Penske superspeedway victory this season but saw three of his cars collected in one crash.

Joey Logano was in the third row on a restart during the second stage and not even up to full speed when Bubba Wallace knocked him out of line and into the outside wall. Logano’s car then shot back into the field and teammates Austin Cindric, the Daytona 500 winner, and Harrison Burton, who drives for the Penske affiliate The Wood Brothers, were among those collected in the eight-car crash.

The crash actually collected five of the 16 Ford drivers in the race, and an earlier accident knocked out another two when Chase Briscoe and Chris Buescher were eliminated. The Ford group was the most organized manufacturer at the season-opening Daytona 500 and used their strategy to get Cindric into victory lane.

It marked the third time in the last four races at Talladega that Logano has crashed out, and it was his first DNF of the season.

“You’re getting pushed from behind. You’re pushing the car in front. There’s nothing you can do, and I was the one that got shuffled out, ”Logano said. “It stinks. It’s Talladega. I don’t know, some people love it. I can’t say I do. “

The Cup Series races next Sunday at Dover International Speedway in Delaware. Alex Bowman is the defending race winner.