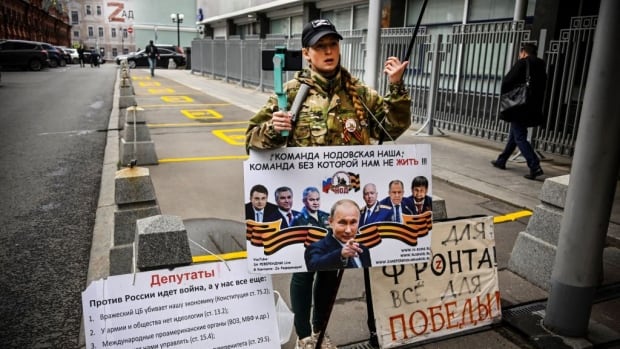 Video on Twitter from the eastern Siberian city of Neryungri showed men emerging from a stadium. Before boarding buses, the men hugged family members waiting outside, many crying and some covering their mouths with their hands in grief. A man held a child up to the window of one bus for a last look.

Although polls have suggested widespread domestic support for Russia’s intervention in Ukraine, mass conscription may be a domestically risky move after past Kremlin promises it would not happen and a string of battlefield failures in Ukraine.

“Every normal person is [concerned],” said one Russian man identifying himself only as Sergei, disembarking in Belgrade after a flight from Moscow on Thursday. “War is horrible. It’s OK to be afraid of war and of death and such things.”

One Russian man arriving at Istanbul Airport on Thursday said he had left partly over the Kremlin’s decision. “Partial mobilization is one of the reasons why I am here. [It’s a] very poor step and it seems to be that it can lead to lots of problems [for] lots of Russian citizens,” said Alex, who declined to give a surname.

In a televised address, Russian President Vladimir Putin said a partial mobilization would be necessary for the next phase of its war with Ukraine. He also accused the West of engaging in ‘nuclear blackmail.’

Another Russian, who gave his name only as Vasily, arrived in Istanbul with his wife, teenage daughter and six suitcases.

“The mobilization was inevitable because there was a shortage of human resources. I am not worried, because I’m already 59 years old and my son lives abroad,” he said.

Ukrainian President Volodymyr Zelenskyy, in some of his harshest comments so far in the nearly seven-month war, lashed out at Russians succumbing to the pressure to serve in their country’s armed forces and those who haven’t spoken out against the war. In his nightly video address, he switched from his usual Ukrainian language into Russian to directly tell Russian citizens they are being “thrown to their deaths.”

“You are already accomplices in all these crimes, murders and torture of Ukrainians,” Zelenskyy said, wearing a black T-shirt that said in English: “We Stand with Ukraine,” instead of his signature olive drab T-shirt. He said Russians’ options to survive are to “protest, fight back, run away or surrender to Ukrainian captivity.”

Western leaders have derided Putin’s order as an act of weakness and desperation.

Anti-war protests in 38 Russian cities saw more than 1,300 people arrested on Wednesday, a monitoring group said. Some of the detainees had been ordered to report to enlistment offices on Thursday, the first full day of conscription, independent news outlets said. More rallies are planned for the weekend.

Russia said reports of an exodus were exaggerated.

Russian news agencies, meanwhile, reported on Thursday that 10,000 people had volunteered to fight even before their call-up papers had arrived, citing the Russian General Staff.

Putin’s decree Wednesday about the mobilization was short on details. His defense minister has said that as many as 300,000 reservists could be tapped. It was apparently an effort to seize momentum after a Ukrainian counter-offensive this month retook swaths of territory that Russians had held.

Russian antiwar protest movement Vesna (“Spring”) has called for more protests on Saturday. “In the end, getting a fine or a few days of arrest is better than getting a funeral,” it said in a statement.

Russian state-owned pollsters say that more than 70 percent of Russians support what the Kremlin calls the “special military operation” that began Feb. 24, although polling leaked in July showed an even split between those who wanted fighting to stop or continue.

Traffic up at land border crossings

Prices for air tickets out of Moscow soared above $5,000 US ($6,700 Cdn) for one-way flights to the nearest foreign locations, with most sold out for the coming days. Traffic also surged at border crossings with Finland and Georgia.

German Interior Minister Nancy Faeser offered concrete support to potential deserters. She told the Frankfurter Allgemeine Sonntagszeitung that anyone who “courageously opposes Putin’s regime and therefore puts himself in the greatest danger” can apply for asylum in Germany.

Estonia, Latvia, Lithuania and Poland began turning away Russians from crossings at midnight on Monday, leaving Finland as the only way for Russian citizens to enter the European Union from Russia by land.

Finland, whose 1,300-kilometer border with Russia is the longest in the EU, is closely monitoring the situation, Finnish Defense Minister Antti Kaikkonen said on Wednesday.

Finnish Foreign Minister Pekka Haavisto said on Wednesday that his country may “limit or completely prevent” tourism from Russia.

Addressing world leaders at the annual UN General Assembly in New York, Zelenskyy on Wednesday urged the United Nations to create a special tribunal and strip Moscow of its Security Council veto power.

“A crime has been committed against Ukraine, and we demand just punishment,” Zelenskyy said by video.

UN Secretary-General Antonio Guterres told a Security Council meeting on Ukraine on Thursday that talk of a nuclear conflict was “totally unacceptable.”

He also effectively warned Russia against taking the territories saying, “any annexation of a state’s territory by another state resulting from the threat or use of force is a violation of the UN Charter and of international law.”

The Security Council has been unable to take any meaningful action on Ukraine because Russia is a permanent veto-wielding member along with the United States, France, Britain and China. Thursday’s meeting was at least its 20th on Ukraine this year.

On the ground, Russia’s military fired nine missiles on the city of Zaporizhzhia, hitting a hotel and a power station, said regional governor Oleksandr Starukh. At least one person died with others trapped under rubble, he said. Zaporizhzhia is about 50 kilometers from the nuclear plant of the same name.

In the Russian-held southern city of Melitopol, also in the Zaporizhzhia region, a blast hit a crowded market. The city’s exiled mayor said it had killed three soldiers and was staged by occupying forces to accuse Ukraine of terrorism, while a member of the Russian-installed local administration accused Ukrainian special services of trying to cause chaos on the eve of a vote.

Pro-Moscow regional leaders announced referendums on joining Russia from Friday until Sept. 27 in Luhansk, Donetsk, Kherson and Zaporizhzhia provinces — around 15 per cent of Ukrainian territory.

Ukraine and its allies have denounced that as a “sham” to try to legitimize an illegal land grab.

While the hostilities continued, the two sides did manage to agree on a major prisoner swap. Ukrainian officials announced the exchange of 215 Ukrainian and foreign fighters — 200 of them for a single person. An ally of Putin’s, Denis Pushilin, head of the self-proclaimed Donetsk People’s Republic, confirmed that pro-Russian Ukrainian opposition leader Viktor Medvedchuk, was part of the swap.

Putin has repeatedly spoken about Medvedchuk as a victim of political repression. Media reports alleged that before Russia’s invasion, Medvedchuk was a top candidate for leading a puppet government the Kremlin hoped to install in Ukraine.