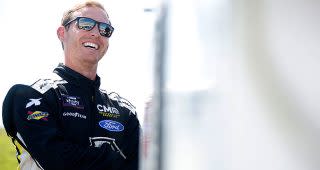 Over the course of the past decade, many fans have found reason to cheer on RSS Racing in the NASCAR Xfinity Series. After all, it’s the little team that could, having outrun teams with much larger budgets for years.

Before the 2021 season, RSS Racing made the jump to Ford Performance after running Chevrolets since its entry into the 2013 series.

“With Chevrolet having so many teams, we were pretty low in line with Chevrolets and trying to get some more help,” Ryan Sieg told NASCAR.com. “We figured Ford would want to help more and just tried to get further up on the list to get more help.”

Initially, there were hiccups, causing the team’s results to sag on the race track. Through it all, the No. 39 car had speed, despite just seven top-10 finishes over the 33-race schedule.

Though it was frustrating internally, Sieg anticipated some glitches along the way. This was the first time his small family-run operation had experienced a switch of this magnitude.

“Last year there was a struggle swapping over because everything was new and you’re dealing with new people at Roush Yates (Engines) and we were getting acclimated to how they do things after doing everything with Chevrolet for so long,” he said. “But about three-quarters of the way through last year, we got it figured out and it has carried on to this year.”

During the offseason, RSS Racing hired new employees for its Sugar Hill, Georgia, race shop. The team also received newer Ford Mustangs from Stewart-Haas Racing, and Sieg now has eight cars in inventory for the No. 39 team.

On the race track, those newer chassis have paid dividends, with Sieg already matching his seven top 10s from 2021 through just 10 races. And outside of a run-in with Ty Gibbs early into the Las Vegas Motor Speedway race, Sieg has no finishes worse than the 11th.

In past years, Sieg has gotten off to similar starts. In 2019, he had five top-10 finishes through the opening 10 races of the season; in 2020, he fell just below that total with four. As the season progresses and the equipment starts to wear, it will be about how RSS can maintain what it has done thus far.

“We always start out pretty fresh, and that’s an advantage,” said Kevin “Cowboy” Starland, Sieg’s crew chief. “Our biggest challenge is going to be staying that fresh. We’re mixing the cars up, and we’ve got enough cars for Ryan now that we can rotate them out and they all perform well. We’re going to try to have the freshest stuff come the playoffs. ”

The start of the year has been promising for RSS. Currently, Sieg’s average finishing position is 11.8, on pace to shatter his previous best (14.6 in 2019). The team’s goal, this time, is not to fade as the year continues.

“We just have to keep defending,” Starland said. “Keep knocking out the top 10s, be consistent and race hard.”

Part of the increased speed is finding additional sponsorship. Last year, RSS picked up sponsor A-Game – a sports drink that launched earlier this year. With two-time World Series champion Johnny Damon as the face of the company, it has helped the team with marketability.

Sieg’s primary sponsor, CMR Construction & Roofing, is one of the shareholders of A-Game. Putting its brand on Sieg’s car helped ramp up the launch of the drink, while also showing its faith in the underdog team.

“I’m excited about Ryan Sieg,” said Damon, whose A-Game company sponsored the Xfinity Series race at Dover Motor Speedway last weekend. “He’s an up-and-coming racer that cares. He wants to bring it every time he races. ”

With still 16 races remaining before the postseason begins, Sieg sits ninth on the playoff grid, 45 points above 13th. He has been a factor for the win at both Talladega Superspeedway and Atlanta Motor Speedway, leading on the white flag at his home track.

Sitting with the fourth-best average finish among series regulars, Sieg is confident his team will be part of the playoffs for a third time.

“We’re going in the right direction, and we’ve got a couple of speedways,” Sieg said. “Hopefully, we can make a few corrections and find ourselves towards the front for most of the day and try to win somewhere.

“Our stats show that we run right there, and we’ll keep continuing to improve and get better.”