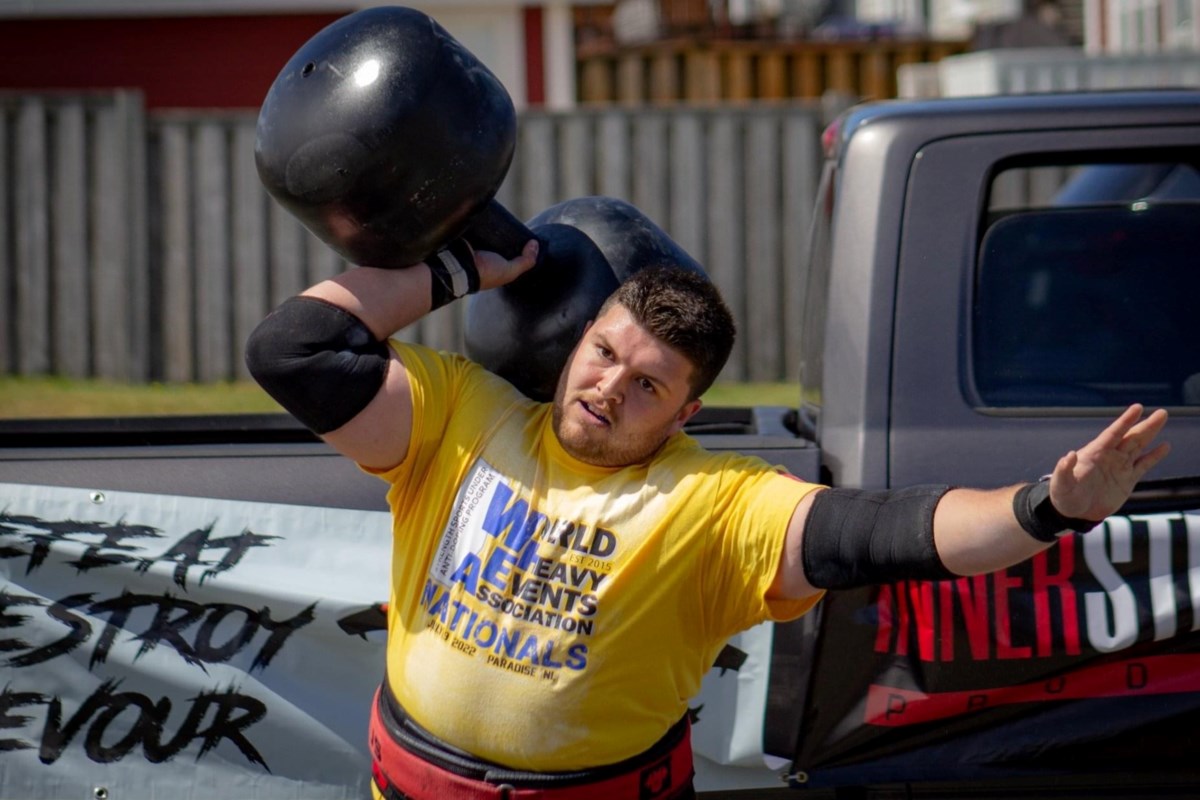 A local strongman is inching closer to making his childhood fantasy a reality.

Ever since he was a young boy, Lance Gingras enjoyed watching the World’s Strongest Man on TV – a series of extreme physical challenges that evaluates a competitor’s strength, agility, and mental toughness.

Now at 24 years old, Gingras is adding an impressive piece to his strongman resume by preparing for his first international circuit in Finland next month.

It hasn’t been the easiest road for him to get there, however.

Just over two years ago, Gingras was studying in London, Ontario before COVID forced him to return home. He had done strength training during his time down south and recently got back into watching strongmen competitions on TV.

His interest to get involved was there, but the facilities in the Sault weren’t.

“I was thinking I could do these events, and I thought I’d be good at them,” he says. “I wanted to give it a go, but there weren’t any gyms available that would have this equipment since it’s such a niche sport. There’s a lot of specialty equipment involved.”

During the pandemic, Gingras was working out at the YMCA when he established a connection with the Valhalla Strongman Club – a privately organized group of local strongmen who train together and prepare for competitions.

Gingras joined the club in December of 2020, and says it was one of the best decisions he ever made.

“I was hooked immediately,” he says. “Just a bunch of big, strong dudes pulling tons and tons of weights – it’s awesome.”

Because there’s no organized facility in town, Gingras purchased his own equipment and trained in his house throughout the lockdowns.

Since joining, Gingras has competed in several online and in-person competitions, establishing himself locally as a serious contender with a clear passion for the sport.

Back in July, Gingras attended the World Heavy Events Association Nationals Competition in Newfoundland and Labrador where he was crowned the champion in his weight category.

The victory qualified him for the upcoming Worlds in Kuopio, Finland.

“It’s nice that things are going in the right direction,” he says. “It goes to show hard work pays off. If you’re consistent and disciplined enough, you can do pretty much anything you want to do. So far, I’m having a lot of fun with it.”

Gingras is just one of three people in Canada who clinched a spot in the WHEA Worlds.

The competition in Finland will be a points system, and includes several events like the Conan’s carry, log for reps, sac carry, axel hold, sauna deadlift, and a tractor push event.

Earning recognition in this particular competition may not guarantee a professional career for Gingras, but he explains the trip is an important stepping stone in reaching the top of the strongman field.

“It’ll help me grow connections and I’ll be able to meet new strong people as well and grow my portfolio,” he says. “In another 4 to 5 years, I think I’ll be exactly where I should be.”

Gingras’ short-term goal is to make The Arnold Amateur Strongman World Championships. Ultimately, his dream is to compete professionally on the international stage, and live for a chance to be the World’s Strongest Man.

But first, the young man’s eyes are locked in on finding success in Finland, for which Gingras follows a strict schedule to prepare.

Training upwards of 13 hours each week with his coach Dennis LaBreche, Gingras spends one day on squats, one day on deadlifts, another on overhead press, and a fourth day on competition prep.

While it hasn’t always been easy, especially during COVID, Gingras says the time and effort he dedicates to his craft has had a huge pay off.

“Over the last couple of years, there have been some ups and downs with training,” he says. “But it’s nice to see that if you push through these difficult times, things can lead up to moments like this. It means a lot to represent Sault Ste. Marie.”

Gingras says he has never been to Finland before and credits the encouragement from his loved ones in helping make this once-in-a-lifetime opportunity a reality.

Gingras has organized a 50/50 raffle to help with his travel expenses to Finland. To purchase a ticket or to follow his journey, visit his Instagram @LG_Strong or his Facebook page here.