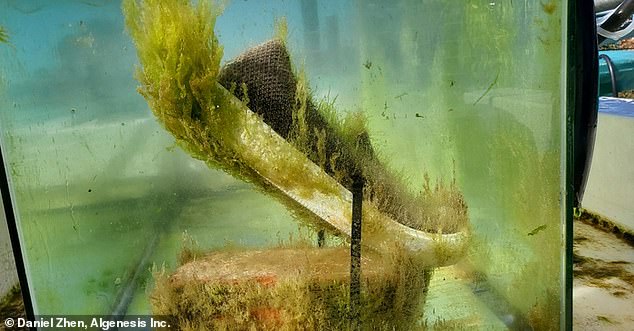 Leather can take 40 years to biodegrade, and rubber soles take up to 80 years. Meanwhile every piece of plastic you have ever worn still exists on the planet.

That means the 600 million shoes that are thrown out every year in the UK could still be around in thousands of years – but your next pair may not take that long.

This is because scientists from the University of California San Diego have created a plimsoll that starts to biodegrade after just four weeks underwater.

Its materials are designed to be broken down to their original chemicals by sea creatures, which they can then consume as nutrients.

The researchers say that the replacement for plastic could tackle the pollution currently plaguing the world’s oceans.

Professor Stephen Mayfield said: ‘Improper disposal of plastic in the ocean breaks down into microplastics and has become an enormous environmental problem.

‘We’ve shown that it’s absolutely possible to make high performance plastic products that can also degrade in the ocean.’

Its materials are designed to be broken down to their original chemicals by sea creatures, which they can then consume as nutrients.

WHAT IS THE BIODEGRADEABLE POLYURETHANE MADE FROM?

About half of the polyurethane foam is made from oils extracted from algae.

The other half is made from an isocyanate, which comes from petroleum.

The isocyanate is still biodegradable and edible to microorganisms.

‘Some organisms can live on just our foam and some salts, so our foam is actually food for microorganisms,’ Professor Mayfield said.

Professor Mayfield added: ‘Plastics should not be going into the ocean in the first place, but if they do, this material becomes food for microorganisms and not plastic trash and microplastics that harm aquatic life.’

In 2010, researchers estimated 8 billion kilograms of plastic end up in the ocean each year, and a steep rise is predicted by 2025.

Footwear is a large contributor to this waste in both water and landfill, and plastic-based flip-flops are also the world’s most popular shoes.

When plastic waste enters the ocean it disrupts marine ecosystems and migrates together to form giant mounds of trash, like the 1.6 million square-kilometer Great Pacific Garbage Patch.

The material does not ever completely degrade in the sea, and instead breaks up into tiny microplastics that remain there for centuries.

Over the past eight years, Professor Mayfield’s team have been developing polyurethane foams made from algae oil, which in 2020 they proved would rapidly degrade in compost and soil.

The foam also meets commercial requirements for the foot-bed of flip-flops as well as the cushioning midsole section of shoes.

For their new study, published yesterday in Science of The Total Environment, they wanted to test if submerging the material in seawater would yield the same results.

They exposed foam samples to a natural nearshore ecosystem at the Ellen Browning Scripps Memorial Pier and Experimental Aquarium over a period of up to 30 weeks.

Changes in the molecular bonding of the samples were tracked using Fourier-transform infrared spectroscopy and visualized with scanning electron microscopy.

Footwear is a large contributor to plastic waste in both water and landfill, and plastic-based flip-flops are also the world’s most popular shoes (stock image)

The team exposed polyurethane foam samples to a natural nearshore ecosystem at the Ellen Browning Scripps Memorial Pier and Experimental Aquarium over a period of up to 30 weeks. Changes in the molecular bonding of the samples were tracked using Fourier-transform infrared spectroscopy and visualized with scanning electron microscopy

It was found that the polyurethane started to biodegrade after only four weeks, which was helped along by an assortment of marine organisms.

Professor Mayfield said: ‘I was surprised to see just how many organisms colonize on these foams in the ocean. It becomes something like a microbial reef.’

The bacteria and fungi broke up the long polyurethane molecules into their original starting chemicals, which they could then themselves consume as nutrients.

The team then identified these microorganisms, and located them in six sites across San Diego.

This suggests that the type of creatures capable of degrading the material are prevalent throughout the natural marine environment.

‘No single discipline can address these universal environmental problems but we’ve developed an integrated solution that works on land—and now we know it also biodegrades in the ocean,’ said Professor Mayfield.

Of 30 billion plastic bottles used by UK households each year, only 57 percent are currently recycled.

With half of these going to landfill, half of all plastic bottles that are recycled go to waste.

This is largely due to plastic wrapping around bottles that are non-recyclable.

Bottles are a major contributor to the increasing amount of plastic waste in the world’s oceans.

Researchers warned eight million tons of plastics currently find their way into the ocean every year – the equivalent of one truckload every minute.

The amount of plastic garbage in the world’s oceans will outweigh fish by 2050 unless the world takes drastic action to further recycle, a report released in 2016 revealed.

At current rates, this will worsen to four truckloads per minute in 2050 and outstrip native life to become the largest mass inhabiting the oceans.

An overwhelming 95 percent of plastic packaging – worth £65 – £92billion – is lost to the economy after a single use, the Ellen MacArthur Foundation report stated.

And available research estimates that there are more than 150 million tons of plastics in the ocean today.

Plastic pollution is ruining the ecosystems of the world, both marine and terrestrial. It litters shorelines, snags animals and suffocates entire populations of animals

So much plastic is dumped into the sea each year that it would fill five carrier bags for every foot of coastline on the planet, scientists have warned.

More than half of the plastic waste that flows into the oceans comes from just five countries: China, Indonesia, Philippines, Vietnam and Sri Lanka.

The only industrialized western country on the list of top 20 plastic polluters is the United States at No. 20.

The US and Europe are not mismanaging their collected waste, so the plastic trash coming from those countries is due to litter, researchers said.

While China is responsible for 2.4 million tons of plastic that makes its way into the ocean, nearly 28 percent of the world total, the United States contributes just 77,000 tons, which is less than one percent, according to the study published in the journal Science .