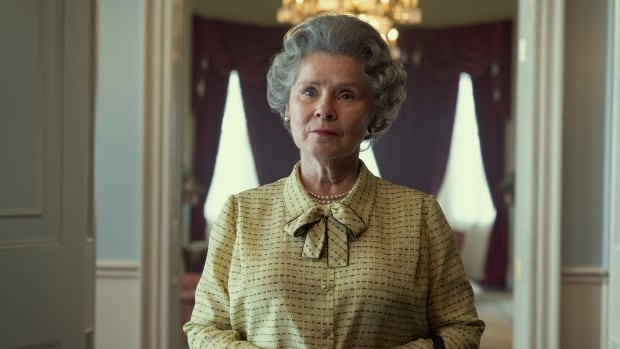 In a year already full of film and TV releases, there’s still much to come. For the fall and winter months, streamers and traditional broadcast networks are locked in an original-content race — all looking to command eyeballs and bump up audience numbers in an already-overstuffed industry.

The good news? Lots of new shows for media-hungry TV fans. Here, CBC News has compiled some of the buzziest — and some of the lesser known — shows coming out later this year.

Following on the heels of four incredibly successful seasons, Netflix’s The Crown — a biopic that follows Britain’s Queen Elizabeth from her coronation to increasingly modern-day events — will drop in November.

After two seasons of Olivia Colman portraying the queen, English actor Imelda Staunton is set to debut an older, though no less regal, Elizabeth for Season 5.

The series was still filming its following sixth season on the day of the queen’s death earlier this month, resulting in a temporary hiatus both on that date and for her funeral on Sept. 19.

At the time, writer Peter Morgan described the newest season as a “love letter to her.”

After an unbelievable 12-year run, The Walking Dead‘s main series will conclude next month. The eight remaining episodes of the zombie-apocalypse show will air beginning on Oct. 2. Canadian watchers can stream on AMC+, or on participating cable providers.

The series — which will debut alongside his 10th studio album of the same name — follows Cudi as up-and-coming artist Jabari “as he attempts to balance love and success.”

In a promoting tweet IntergalacticCudi (real name Scott Mescudi) described it as “really f–king special,” and that “minds will melt.”

The sleeper hit from Canadian star and writer Bilal Baig is back; Sort Of is debuting a new season of the Fleabag-esque character-drama in mid-November. The series follows Sabi Mehboob, a gender-fluid millennial trying to get their life in gear, all while dealing with a family and friend group caving in on themselves.

The series’ second season welcomes new stars, including The Kids in the Hall‘s Scott Thompson and The Handmaid’s Tale‘s Amanda Brugel.

Tulsa King is a mob drama that has something else to brag about — creators Taylor Sheridan and Terence Winter have snagged silver-screen legend Sylvester Stallone in his scripted-TV debut.

Stallone will appear as Dwight (The General) Manfredi, heading to Tulsa after serving 25 years in an Oklahoma prison, busting out every bit of violence and action you’d expect from a Stallone-led production.

ABC (broadcasting on CTV in Canada)

Filmed largely in British Columbia and the Northwest Territories, this Hilary Swank story is a bit surprisingly titled Alaska Daily. It follows Swank as a disgraced journalist on the trail of crime and murder in the northern state.

And though it’s not Swank’s first broadcast television project, it is her first in more than 20 years, since a 1998 appearance in Beverly Hills, 90210.

Apple TV, like all production houses diving deep into the war of the streamers, is continuing to invest in original programming. The latest offering is Shantaraman adaptation of the novel of the same name by Gregory David Roberts, which follows Australian fugitive Lin Ford living in Bombay, India.

It stars Charlie Hunnam as Ford, and will release three episodes on Oct. 14, followed by weekly Friday releases until its 12-episode run is exhausted on Dec. 16.

Adapted from the much-loved cartoon of the same name, Avatar: The Last Airbender is going for its second live-action remake following the ill-fated 2010 attempt by director M. Night Shyamalan.

The anime-influenced original series followed 12-year-old Aang, who, after spending 100 years frozen in ice, emerged as the last “airbender” — one of the four telekinetic groups that control a different fundamental element — tasked with saving the world .

There is no release date — aside from an optimistic “coming soon” from Netflix. And the series itself isn’t without controversy: original creators cut ties with the adaptation in 2020 due to creative differences.

Another story that has been adapted, re-adapted and adapted again is here. Let the Right One In began its life as a Swedish novel by John Ajvide Lindqvist, before finding a second life as a haunting film also written by Lindqvist.

That led to another adaptation, called Let Me Infeaturing then up-and-coming child stars Kodi Smit-McPhee and Chloë Grace Moretz.

As a gory tale of a child-vampire befriending an ostracized and bullied boy, the story has proved particularly difficult to adapt — with a morbid twist that has been largely omitted from both film adaptations. The series’ recently released trailer hints at just as much gore as the novel, with a particular focus on horror and potential departures from the original.

From the creators of warped time-travel series Dark comes another otherworldly series: Netflix’s 1899. It follows the passengers of a migrant steamship, in that same year, who encounter the long-lost ship Prometheus, drifting seemingly deserted in the Atlantic Ocean.

The first two episodes — which center around a mystery presented by passengers discovering a lone child onboard the ship — premiered at this year’s Toronto International Film Festival to mostly positive reviews. It is set to debut sometime later this year.

Early looks at Emily Blunt’s new western series have been described as everything from violenttho tenderto “bonkers,” and continues the trend of big-screen actors moving to television for new and daring projects — ones that perhaps promise more of an audience than the increasingly threatened world of cinema.

Blunt has previous television experience, appearing in the ABC mini-series Empire back in 2005. Although The English appears completely different. Here, the Edge of Tomorrow star plays Cornelia Locke, an 1890s Englishwoman seeking revenge for the death of her son.

In an interview with PeopleBlunt called the Prime Video/BBC-joint production an “epic chase thriller” combined with “a love story that runs and reigns supreme through it.”