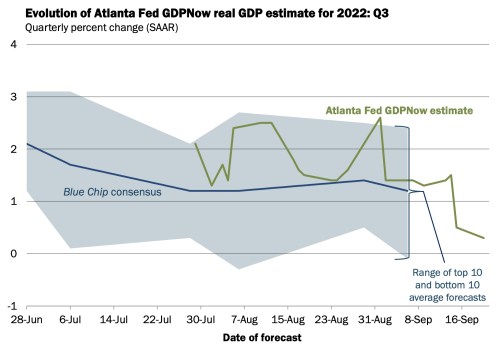 Today the market paid back some of its delusional holdings. It has a lot more left to pay back. You see, the market believed the Fed all of last year when the Fed said inflation was transitory. Or, at least, market leaders sold the Fed’s narrative, accelerating us into a heck of a wreck.

It’s not clear whether the market leaders actually believed that narrative or even if the Fed did. Maybe the Fed just hoped it would be true. What is clear is that the Fed, which also sold everyone on the belief that it is data dependent, had almost no data all of last year upon which to base its “transitory” narrative and all kinds of data that said it wasn’t even close to being transitory. This I know for a data-based fact because I kept pumping that data along as I came across it myself; and, if I could see it in such overwhelming abundance, so could they. Or, at least, so should they.

Today, it got another bruising reminder that the Fed is serious about fighting inflation that truly isn’t transitory when the Fed gave another 0.75% rate hike. That brings the Fed’s baseline interest up to an incredibly mild 3.0-3.25%. Adjust that interest rate for inflation, and it is still deeply negative. It is, in other words, much cheaper to take out a loan to buy a car now than to save your money and then buy it down the road for cash. You’re losing the whole time you saved. So, it is still a highly stimulating rate, having the effect of pulling tomorrow’s sales forward to goose the present economy.

The cost of being Fed-wrong

You can see what it costs when the Fed is grossly wrong in one of its core beliefs — in this case core inflation. The Fed should have started slowly tightening at the beginning of last year to throttle back on inflation in increasing moves as soon as inflation began to heat up, but the Fed believed inflation was just an anomaly that would go away on its own.

Today, the Fed is just as grossly wrong about another anomaly it doesn’t understand, I just wrote about that in “Everyone Sings the “Strong Labor Market” Tune in Unison as the Band Plays on, and They’re All DEAD Wrong! ” What I want to do today is highlight the cost of believing the Fed’s wrong narrative. If the Fed had not believed its transitory narrative or, at the very least, based everything it did on hope that transitory would prove to be the case, it would have tightened on inflation gradually, and the market would have seen by now that it was serious, consistent and progressively tougher, and inflation wouldn’t have risen so high and would already be on the way back down. Because the Fed was wrong, the market continued until a couple of weeks ago to believe this whole tightening thing was just a head fake that would quickly go away in a predicable Powell Pivot. Powell is still struggling to gain market confidence in what he says.

Days like today when the market bounced up then down then up then down hard enough to finish 522 points in the hole shows the market will have to give back all it has wrongly held on to … eventually. Investors got their heads banged from floor to ceiling because they haven’t been listening to the Fed because the Fed has lost a lot of credibility.

Now, Powell is making an even more catastrophic mistake, as I laid out in that article, and the error is going to cost him a great deal more credibility down the road when the Fed will need credibility most, and when we will all need it most to believe in the Fed but can’t. Once again, in his presser, Powell made the comment that the economy is fundamentally resilient. He even claimed modest growth in production on the same day his own bank claimed in its GDPNow forecast that its prediction for GDP was almost back to zero:

Interestingly, for the first time all year, the consensus forecast of economists has run under the Atlanta Fed all quarter long. That is the flip of previous quarters where they ran way above the Fed. It looks like the consensus economists no longer quite believe the Fed any longer either. On top of that, we haven’t even finished off the quarter, and what we saw each of the past two quarters was the Atlanta Fed dipped to about where it is now at this point in the quarter and after the quarter closed, their forecast drove down increasingly lower until it caught down about to where actual real GDP came out when revealed. Each time, I predicted the quarter would be negative (recessionary), and each time it was, and I am predicting the same thing this quarter.

That will give us three negative quarters of real GDP “growth,” which is almost a full year of recession, as the NBER continues to debate whether or not it should believe the Fed that the economy is basically strong (having been revised down now to merely “resilient”) on the basis of the jobs market or should just declare us to be in a recession.

The price of being wrong on their transitory rate was what I warned of: the fed would have to tighten faster and harder when it finally figured out it was wrong. So, it is perfectly expected to read today,

Three 75-basis-point rate hikes in a row is unprecedented since the Fed explicitly started targeting the federal funds rate to conduct monetary policy in the late 1980s.

In other words, hardest and fastest ever for this space of time.

Fed officials expect to raise rates higher than before and keep them at that level for longer.

So, the cost of being wrong on something so central to the Fed’s mission — as inflation is dead-center of the Fed’s mission — is that you lose trust in an organization for whom trust is truly their only stock in trade since that is the only thing their money is based on. Then you have to hurt people harder for longer and put the economy at worse risk, not less risk, when you do belatedly take corrective action.

That is what this Fed FOMC meeting was about, and that is why the market dropped over 500 points even when everyone knew, at least on the surface, that a 75-basis-point hike was a virtual certainty that should have been priced in.

As our chief Fed head summarized,

“If we want to set ourselves up, really light the way to another period of a very strong labor market, we have got to get inflation behind us,” Powell told reporters. “I wish there was a painless way to do that. There isn’t. What we need to do is get rates up to the point where we’re putting meaningful downward pressure on inflation. And that’s what we’re doing.”

And what is everyone hanging their hope on as the basis for their belief in a fundamentally strong or, at least, now downgraded to “resilient,” economy? It is that new thing the Fed is totally wrong about. The Fed believes the strong labor market is NOT transitory when, in fact, the labor market made its transition from strong to deeply sick at the start of the Covidcrisis, and the Fed doesn’t know how to see it as that article explains in detail.

If you want to hear me get really worked up about this, I just did a podcast interview with Tom Pochari that you can listen to at Destructive Capital. (For now it is at the top of the left column.) Why is it worth getting worked up about? Because the cost of being wrong on the jobs market is that the Fed is completely wrong about the recession we are already in, and that means it is still tightening faster and harder than ever three full quarters into a recession that is going a lot deeper.

But another really risky cost is that, when everyone finally realizes the Fed is DEAD WRONG about the jobs market and was, as a result, DEAD WRONG about the recession after already being DEAD WRONG about inflation that turned scorching hot, the Fed isn’t going to have any credibility left when it comes time to navigate the huge curve it is plunging us all into. And, if they don’t have credibility, they have nothing because the Fed’s faith and credit is the only thing it has to sell.

Understanding WHY the Fed is wrong on this is every bit as critical for this year as understanding why they were wrong on inflation was all of last year; and, while some people did see the Fed was wrong about inflation last year, from one sees how wrong the Fed is about the job market and the current recession that their belief in a strong jobs market masks. That means fear will explode as we break through the rails on the curve and everyone realizes at once they were all Fed-wrong.

The Fed is doing ninety miles per hour, heading down a three-mile grade and into a curve. This is going to be the worst train wreck in Fed history like the “Wreck of the Old 97.” (After listening to the song, check out the interview at Destructive Capital to hear me on a roll about the wreck the Fed is already steamrolling us into, and remember that train wrecks don’t happen all at once. They keep wrecking.) That interview and the previous article are the most important realizations you can make ahead of the curve if you’re going to attempt to bail before we go off the rails.

Did you like it? Take a second to support David Haggith on Patreon!