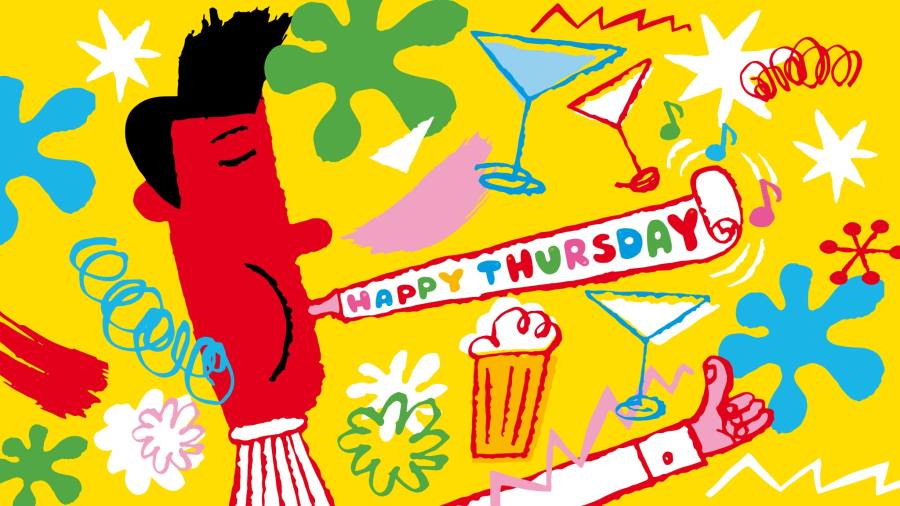 The world’s largest trial of the four-day week has been going for more than two months here in the UK and some of the early results are encouraging.

“Extremely promising,” says one of the incessant emails on the matter that have flooded my inbox this month. “Life changing,” said a manager whose bank is among the 70-odd companies taking part in the six-month experiment.

I doubt that everything is entirely rosy, but lately I have begun to wonder if we need this pilot at all. The streets of London increasingly make it look as if the four-day week is already here.

I say this semi-facetiously after months of cycling home from the office on weekday evenings through the City of London financial district and past a large number of pubs.

Before the pandemic, the need to dodge crowds of enthusiastic drinkers spilling out on to the streets was generally greatest on a Friday evening. But as more flexible hybrid office working has persisted, the pubs have become noticeably busier on Thursdays.

“Thursdays are the new Fridays, definitely,” says Inta Minina, assistant manager at the Red Lion pub that I pedal past most evenings.

It has five or six staff on duty on Thursdays but only three or four on Fridays, Minina told me last week, adding other pubs nearby had adopted similar staffing patterns.

Tuesdays, Wednesdays and Thursdays are still by far the most popular days for people to work in the office instead of at home, a survey of nearly 80,000 employees in 13 countries showed last week.

Office attendance drops to a puny 12 percent globally on Fridays and 13 percent in the UK, data from the Advanced Workplace Associates consultancy shows.

The Friday slowdown is also reflected in London Underground numbers.

In the weeks before the capital’s first lockdown in March 2020, about 4mn journeys a day were made on the Tube on both Thursdays and Fridays.

A steady shift over the past 12 months means Thursday journeys now regularly outstrip Fridays by 200,000 trips or more.

Transport officials say people are still using the Tube on Fridays to go out for a night on the town but commuter numbers are clearly lower.

It may not be fair to say that all this adds up to the equivalent of a four-day working week. By no means everyone who downs a pint or two of beer on the way home on Thursday spends the whole of Friday doing zero work.

It is also true that long before the pandemic a lot of people would wind down early on Friday afternoons, in London and beyond.

But the pandemic seems to have intensified that trend. I know I am not the only journalist who makes an extra effort to avoid making last-minute calls on a Friday, when the chances of a response are, as it were, remote.

Does this matter? Hospitality and transport executives I have spoken to say the problem is not the death of Friday busyness that worries them. Rather, it is the relative lack of office workers throughout the entire week.

The Tube still has about 1mn fewer journeys on weekdays compared to the 4mn it had before the pandemic struck, due to fewer overseas visitors — and daily commuters.

Whether you’re the boss, the deputy or on your way up, we’re shaking up the way the world works. This is the podcast about doing work differently.

Join host Isabel Berwick every Wednesday for expert analysis and water cooler chat about ahead-of-the-curve workplace trends, the big ideas shaping work today — and the old habits we need to leave behind.

The Shake Shack burger chain is one of several companies that have this month blamed the endurance of remote work on disappointing sales figures.

Workers themselves seem happy for this to continue.

Most Londoners — and most Conservative voters in the city — think the media often exaggerate the downsides of working from home.

About a third fear remote working poses a risk to jobs in the city, but a slightly larger share disagree, a King’s College London study showed in June.

We don’t yet know what an economic recession might do to these numbers — or to the four-day working week movement. But so far, a bet on life returning to exactly what it was before Covid is still a very brave one.