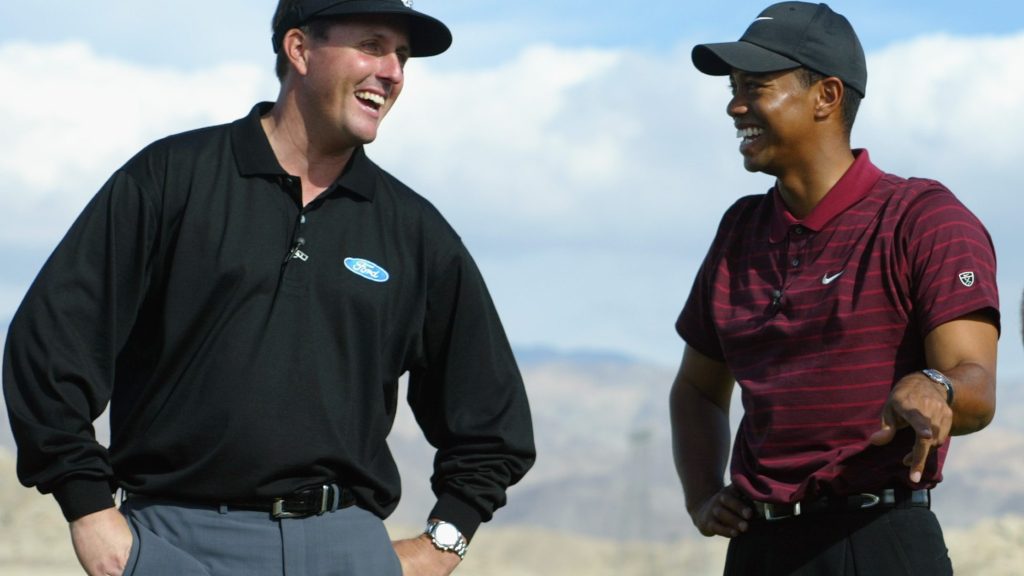 The saying “what a time to be alive” has become trite thanks to its overuse on social media, but when it comes to the era of Tiger Woods and Phil Mickelson it just feels so apropos.

From his unprecedented three consecutive US Junior and US Amateur titles to 15 majors, winning a Masters by 12, a US Open by 15, a British by eight, on one leg at Torrey and nearly 11 years later a fifth Masters after even he thought he was done, Tiger has been the greatest thrill ride in sports. Phil is the last amateur to win a PGA Tour title, went winless in his first 46 majors before sinking a birdie putt on 18 to win the Masters and celebrated with one of defining white-men-can’t-jump efforts. He would win five more, including an unforgettable final-round performance at Muirfield to win the British and his age-defying out-of-nowhere triumph at the 2021 PGA Championship. But his defeats, especially at the US Open, where he finished second six times, were equally if not more jaw-dropping and memorable.

Imagine having been a national golf writer during the era in between Jack Nicklaus and Phil and Tiger and your bar stories revolve around Andy North and Scott Simpson winning US Opens or Sandy Lyle and Ian Woosnam at the Masters? Great golfers all but nothing like witnessing a Tiger Slam or a 50-year-old seemingly with little left in the tank win a major. Or the dominance of 683 weeks at World No. 1 and making a never-to-be-broken 142 straight cuts on Tour. Bob Harig, who has covered the golf scene for the St. Petersburg Times, ESPN and now Sports Illustrated / Morning Read, was born at the right time and had a front-row seat for so much history. The result is “Tiger & Phil,” a 368-page romp printed by St. Martin’s Press.

Let’s start with the sub-title: “Golf’s most fascinating rivalry.” Hogan and Nelson and Palmer and Nicklaus fans may tend to disagree, and it does lend itself to claims of review bias, but Harig is the first to admit that many will look at his premise and go… what rivalry?

“Whether they were truly rivals – or even friends – might be debated on barstools until closing time and beyond,” Harig writes.

After all, Tiger rattled off eight majors before Phil got his first. Tiger was 25 when he won his sixth major, completing the Tiger Slam at the 2001 Masters, half the age of Mickelson when he claimed his sixth. Phil’s current tally is equal to Nick Faldo and Lee Trevino, but Tiger can always drop the fact that in a span of 11 majors, he won seven through the 2002 US Open.

Phil never won a PGA Tour money list, never was voted PGA Tour Player of the Year, never ascended to the No. 1 ranking. Harig points out that Mickelson spent eight different periods at World No. 2 for a total of 270 weeks – all with Tiger at the top spot. Not much of a rivalry in its traditional sense.

Grouped together, their head-to-head mark was much closer with Tiger holding a 19-15-4 edge and taking 2,653 strokes compared to Phil’s 2,678 – that’s just a 25-strokes difference over 38 rounds. (Quick digression: what a missed opportunity that they played that few times in the same group.)

When Mickelson captured the Masters in 2006, the duo traded green jackets just as Palmer and Nicklaus did from 1962 to 1965, and Tiger and Phil combined to win six of the eight major championships played in 2005-06. Another sign of their long and successful run: the 2019 British Open marked the first time in 83 major championships in which they both competed that both players missed the 36-hole cut. Debate all you want whether the one-sided nature of Tiger’s dominance qualifies theirs as a rivalry, but fascinating it most certainly was. For much of their careers, you were a Phil fan or a Tiger fan but rarely both. Harig depicts all the twists and turns in their relationship.

“For a long time, Tiger saw Phil as an underachiever,” he writes, “a player not getting the most out of his immense talent, one unworthy of his respect.”

One of the most telling anecdotes from their frosty early stages is provided courtesy by Fred Funk, who recalls how Tiger let out a scream in scoring after falling short of winning the 2002 PGA Championship at Hazeltine. But rather than disappointment, Tiger expressed some twisted joy in being bested by a journeyman pro.

“Rich Beem one, Phil Mickelson zero,” he exclaimed, noting the current major count on the scoreboard.

Harig is at his best when bringing some of Tiger’s greatest hits to life – I especially enjoyed the chapter entitled “Torrey Pines,” and the 2008 US Open, which is ever more mind-boggling when Harig reminds readers that Tiger won nine of 12 tournaments and had two seconds and a fifth during a time he did not have a fully functioning ACL, and played at Torrey with two stress fractures in his tibia, the main source of his pain.

This quote from Tiger’s right-hand man Rob McNamara on 2008 at Torrey also sounded as if it could be Tiger’s school of thinking with his current rehab from injuries sustained in his single-car accident in February 2021: “Once he realized he couldn’t hurt himself anymore, that it was simply an issue of pain, he decided he could manage the pain. ”

While the Tiger Slam is only two decades gone, it is still enjoyable to relive and Harig delivers a thorough recount. The book is packed with details such as Tiger paying for a dinner the week of his professional debut at the 1996 Greater Milwaukee Open with a gift certificate and needing to borrow $ 100 from Butch Harmon to pay the entry fee, and I liked this one, too , of the Tiger Tree at the Naval Golf Course in California where Tiger grew up, a tall elm on the sixth hole that stood more than 300 yards from the tee. Tiger hit it as a teenager, which was significant because his dad said he’d be ready for tournaments once he got his tee shots to roll past it.

A couple of my favorite stories regarding Phil: It was big news when Phil and Tiger played a practice round at the 2018 Masters, but I hadn’t realized that it had been 20 years since they’d done so, dating to the 1998 Los Angeles Open when Phil took a victory lap by photocopying the five hundred-dollar bills he’d won from Tiger and sticking them with a note in Tiger’s locker that read: “Just wanted you to know Benji and his friends are very happy in their new home. ” Tiger had a long memory.

And Phil taking Sean O’Hair under his wing at the 2009 Presidents Cup after O’Hair specifically asked not to be paired with him – for reasons that included their different golf balls. Phil found out, agreed to use O’Hair’s ball and lifted him to victory in the team competition. Classic Phil.

Harig spoke to most of the important figures in the careers of Tiger and Phil and there are keen insights into how majors were won such as Steve Williams’ key read at the 1999 PGA at Medinah and Jim “Bones” Mackay talking Phil into a pitching wedge rather than the 9-iron he preferred, believing a hard, aggressive swing with less club would produce the spin needed to get the ball close. Phil stuffed it within inches for a critical birdie. Bones also discloses his biggest regret: his read of Phil’s 6-foot birdie putt at 17 at the 1999 US Open at Pinehurst.

In detailing Phil’s collapse at the 2006 US Open, Harig observes that Phil had lost to Payne Stewart punching out and rescuing par to beat him in 1999 at the US Open and David Toms doing exactly the same thing, wedging onto the final green at the 2001 PGA, then holing the par putt to deny Phil another major. So why did Phil choose to go for the hero shot at 18 at the 2006 US Open?

“It seems Phil could have done the exact same thing at Winged Foot,” Harig writes.

If you’re looking for more salacious details from either of their personal lives, you won’t find it here and that’s OK. My biggest flu with the book is Harig could’ve done more digging into some of the hot-button issues of their careers. He doesn’t gloss over some of their lowlights but he doesn’t add anything new to the conversation (and that includes the golf-centric sensitive subjects such as parting with caddies and coaches). I really liked the few interludes where Harig opted to go first-person, and I only wish he provided more instances because he was one of the few Tiger reporters felt comfortable enough to talk to on- and off-the-record beyond his press conferences (of which Harig notes some 1,700 transcripts between 1996 and 2020 exist on the web).

Through the Years: Tiger Woods and Phil Mickelson