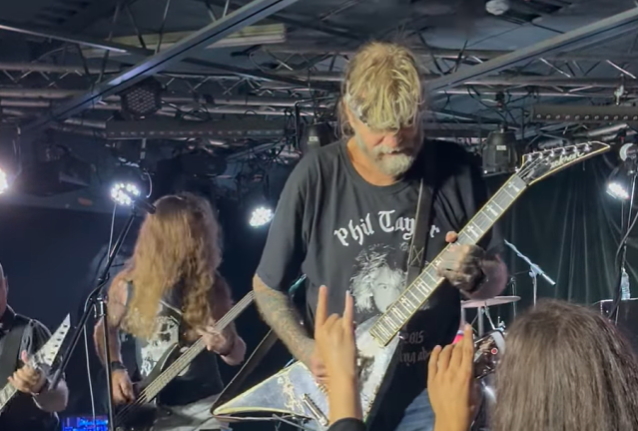 Video of Holmes and his band performing a few tracks, including WASPS‘s “Wild Child”, “The Devil Made Me Do It” and a cover of Neil Young‘s “Rockin’ In The Free World”can be seen below.

Holmes, who recently completed seven weeks of radiation therapy in his battle with throat and neck cancer, discussed his illness in a new interview with France’s Duke TV. Reflecting on how he was diagnosed, Holmes said: “In November of ’21, my throat hurt real bad. I was taking throat lozenges and it just wouldn’t go away. [My wife] Sarah goes, ‘We’re gonna go to a throat specialist,’ and I did. And hey [inserted] a camera in my nose and it goes down your throat. And he pulled it out, and he said something to my wife. And I go, ‘Was it yeast infection?’ And he shook his head, ‘No.’ And then he was talking to Sarah, and she kind of looked down to the ground, and I knew it was cancer. I go, ‘Oh, man.’

“One third of everybody gets cancer on this planet, they say, so it just happened to be me,” he noted. “And I drank and I smoked all my life. I didn’t just smoke light cigarettes. I even asked the doctor if it could be from that. And he said he didn’t know. He said, ‘I couldn’t put a stamp on what it is. It could be hereditary. It could be anything.'”

Chris went on to say that he is trying to stay “positive” in his battle with the disease. “At least the cancer I had was treatable,” he said. “God forbid, a lot of people get cancer and they can’t treat it. At least mine was treatable.”

Holmes also spoke about his treatment, saying: “What happens is seven weeks of radiation — Monday through Friday. And the first you do the radiation, of the treatment, they give you chemo, and then you’re supposed to do chemo halfway through and then at the end. My throat starting hurting. I couldn’t drink water. I was taking morphine. I’d get the treatment and I’d just come home and just go straight to bed and [go] to sleep. And then Sarah, my wife, would wake me up at dinner time and try to get me to even drink something, and I couldn’t drink. And she was almost crying because I was withering down to nothing. They kept telling me they were gonna put a tube in my nose. And that kind of scared me, getting that thing shoved in my nose and my throat, but once they put it in, it didn’t bother me. And I got fed by a tube for a while.

“I finished [treatment] in April, so it’s been four months, and I’m starting to feel a lot better,” he said. “I’m not a hundred percent now. I get a real lot of phlegm in my throat, and it’s real thick and gross. So if I sleep at night, it builds up and I wake up and I can’t get any air, and I’ll have to cough it up. And I have no taste. Everything I taste — I’m not gonna say it tastes like shit, but everything I taste just doesn’t taste what it smells like. I just had a banana, and it didn’t taste like a banana, but I ate the whole thing ’cause I know I’ve gotta start eating food.”

Holmes joined WASPS in 1982 and remained with the group until 1990. In 1996, the guitarist returned to WASPS and stayed with the band until 2001. Chris has not played with WASPS since.

Earlier this month, Chris told Canada’s The Metal Voice that he hasn’t heard from WASPS leader Blackie Lawless since his diagnosis. He said:Blackie could have helped to pay for some of my treatment, but [he didn’t]. Boots Nikki Sixx [MÖTLEY CRÜE] did. He gave me a lot of money. He was the first one; he forked over 500 bucks, and I love the guy for it. Thank you, Nikki. I love him for that.”

He continued: “About the first month I was sick, [I got video messages of support from fellow musicians] and [I got one from JUDAS PRIEST singer Rob Halford]. [In his message, he said]’Christhis is your Metal God, Rob Halford.’ And it was kind of cool. Rob talked a little bit there. And then the guitar player that took [Glenn] Tipton‘s gig [Richie Faulkner] Thank you. A bunch of… tons of people did. But nobody from WASPS did. It’s kind of weird. Nobody. [Blackie] didn’t send me a message at all. I thought he would, but he didn’t. But that’s okay; I didn’t expect it. Glenn Hughes did. I met Glenn on the [BLACK] SABBATH tour [in 1986, when W.A.S.P. was the support act]. What’s sad is I haven’t been able to talk to him since he was fired [from SABBATH]. And we were good drinking buddies [on that tour]. He’s got a heart of gold.”

A few hours later Chris‘s diagnosis was made public in February, Lawless released a statement via WASPS‘s social media in which he said: “The entire WASPS family are all optimistic of a positive outcome concerning the diagnosis for Chris. I certainly wish him the very best.”

According to Chrishey, guitarist Randy Piperdrummer Tony Richards and Blackie were all part of WASPS initial management contract, boot Blackie was the only one signed to the record label. “Everybody thinks we [all] signed to the label, but it wasn’t [like that],” Holmes told “Trunk Nation”.

Despite the fact that he only got songwriting credit on a couple of the songs on each of the first four WASPS records, Holmes was adamant that his input was essential to the band’s overall sound.

“If I hadn’t joined in the beginning, it would have never worked. Blackie told me that the first day, when he came and talked to me to play in WASPS He says, ‘I’ve got this band. It’s not gonna work unless you’re in it.’ He told me that to my face.”

This past February, Lawless shot down Holmes‘s claim that the guitarist was “screwed” out of receiving royalties on the WASPS albums that he performed on. Lawless discussed Holmes‘s tenure with WASPS in an interview with “Trunk Nation With Eddie Trunk”. Asked to respond to Holmes‘s assertion in Chris‘s recently released documentary “Mean Man: The Story Of Chris Holmes” that he was financially taken advantage of during his time in the band, Lawless said: “I don’t really know much about… I spoke to [former W.A.S.P. guitarist] Randy Piper a couple of years ago. I don’t really know what’s going on with the rest of the guys. And I’m not sure exactly what you’re talking about with Chris about not being paid.

“Chris, at two different points in his musical career, received settlements from this band; he signed documents as such,” Blackie explained. “And he was paid quite well.

“I haven’t seen what you’re talking about. The answer I’m giving you right now is based on what you just said to me.”

The WASPS frontman went on to confirm that he hasn’t seen Chris‘s documentary and was once again asked about Holmes‘s claim that there is money and songwriting credits that he didn’t get that he’s due. Lawless said simply: “That is not true.”

During a November 2017 press conference in Moscow, Russia, Lawless was asked what he would say to those WASPS fans who continue to call for the band to reunite with Holmes. He responded: “People get divorced for certain reasons, and there’s times when the kids want the parents to get back together, but sometimes it never happens. And this is one of those [times]. I’m sorry.”

It was a great night yesterday in Toronto at the Rockpile (thank you also Dominic)
Thank you so much Steve Hoeg and Tim Henderson
And everyone who came. It was a precious gift to have all of you
Tonight it will be Ottawa at the Brass monkey

Chris Holmes Official at The Rockpile