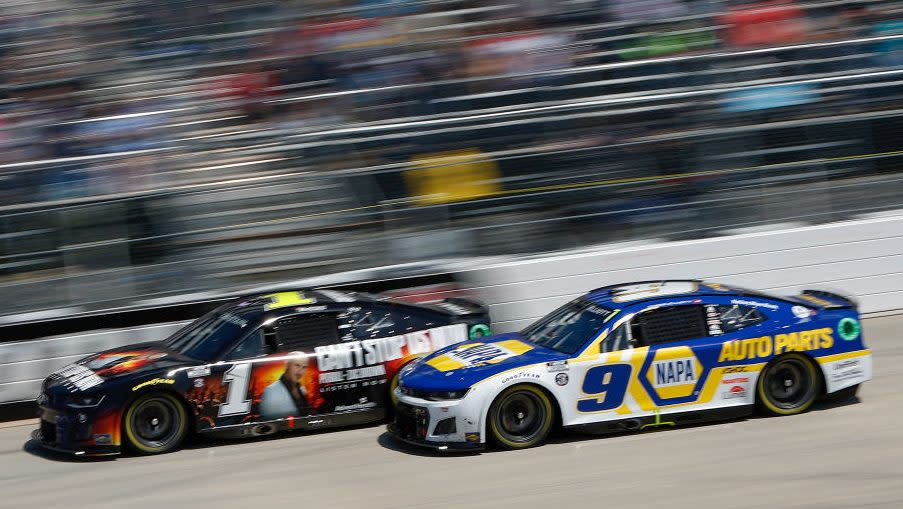 Here is what drivers had to say after Monday’s Cup race at Dover Motor Speedway:

Chase Elliott – Winner: “Had some good circumstances finally. Really appreciate Alan (Gustafson, crew chief) and our entire team No. 9 Chevrolet team for just sticking with it. We’ve had some tough races over the last, I don’t know, four, five months. Just great to get NAPA back to Victory Lane; great to get Hendrick Motorsports back to Victory Lane. Just so proud. This one means a lot in a lot of different ways. Just appreciate all the effort. But thanks to all the fans for coming out. You’re always awesome. Hope to see this big crowd here next year. Just a huge thanks to everybody involved. It’s been a fun day and we’re certainly going to enjoy it. “

Ricky Stenhouse Jr. – Finished 2nd: “This feels good. Hopefully we can carry this momentum on. The big tracks, the tracks we’ve got coming forward, are really good tracks for us. That was a lot of fun. A lot of battling. It was tough to pass, but it was fun running through lap traffic. I really wish we had like a 70-lap run to end there.

Ross Chastain – Finished 3rd: “Pit crew was incredible today. They were just picking up spots every stop, got us the lead. I’m racing with champions and I got beat. ”

Christopher Bell – Finished 4th: “We had an outstanding DeWalt Camry that’s for sure, just very, very frustrating to have those issues and get put behind because I feel like if we could have stayed up front we could have possibly contended for the win. We were able to get back up there in that third stage, and I’ll take it. I’m really proud of this 20 group. “

Alex Bowman – Finished 5th: “Just a bummer day for us because obviously we had a shot at the win there in our no. 48 Ally Chevrolet; and then that caution in the middle of the pit cycle had us starting the last run last. To go last to fifth at a place like this is nothing to be ashamed of because it’s hard to pass. As far as my guys and the race car that we brought, just wish it would have gone a little better for us. ”

Chris Buescher – Finished 8th: “It was an interesting two days. It was a good run for the Fastenal Mustang. Everyone on the team worked really hard and did a nice job.It is a momentum builder It isn’t all that we wanted, but the pole was awesome, that was really cool. I know we had speed in it in clean air. We just fought dirty air. Unfortunately, that is a really big deal here. We could move around for a little bit and the tires would fall off, which is great, but once we got to the point where we had to kind of stay in line we were just sucking up dirty air which made it hard. We want more. I am not content there but it is a strong run for us and I am excited to head into Darlington. ”

Kevin Harvick – Finished 9th: “We just lost the car right there at the end of the second stage and it was plowing tight. We never really were able to find anything to make it any better. I am not sure what happened. We will try to figure that out and go back to work for Darlington next weekend. ”

Justin Haley – Finished 11th: “We led some laps and stayed up front for quite a while until our tires started to go. We turned a little in the dirty air getting super tight, but we were able to rebound and almost got a top 10 out of it. We definitely made some gains today and were the best we’ve been all year. “

Chase Briscoe – Finished 13th: “We were so behind after practice, we just didn’t get a lot of time to work on it with so many cautions, but we made it better for qualifying. We were still pretty far off Sunday when the race started, and warmer weather today really didn’t help. Johnny (Klausmeier, crew chief) and the guys did a great job working on it and, by the end, our balance was good. We just didn’t have enough time to make up ground, and dirty air was a major factor. “

Cole Custer – Finished 15th: “We were just fighting all day trying to make the car better. We got it decent by halfway through and we worked the pit strategy right and caught some luck and got a solid finish. The guys fought hard all day. They did a good job of keeping us in the mix and we ended up making something of it. ”

Aric Almirola – Finished 19th: “Man, we had a car capable of running top 10 all day. We didn’t have it in practice or qualifying on Saturday, and Drew (Blickensderfer, crew chief) and the guys made the right changes for the race. Unfortunately, we just got caught on pit road at the wrong time and it put us two laps down. We were still racing hard and kept our Smithfield / Weis Ford in the ‘Lucky Dog’ position, but we didn’t get the break we needed to race for position again. All in all, we had a good car and good speed, so I’m proud of that. ”

Austin Dillon – Finished 23rd: “We struggled with a very stiff front end and a tight handling condition no matter what chassis adjustments we made. This No. 3 team never gave up, though. We worked hard to make adjustments and it finally started to handle a little bit better with about 60 laps remaining in the race. By then, we were running pretty decent lap times but it was too late to make up much ground. It’s not what we wanted this weekend, but we’ll regroup and head to Darlington Raceway. “

What drivers said at Dover originally appeared on NBCSports.com