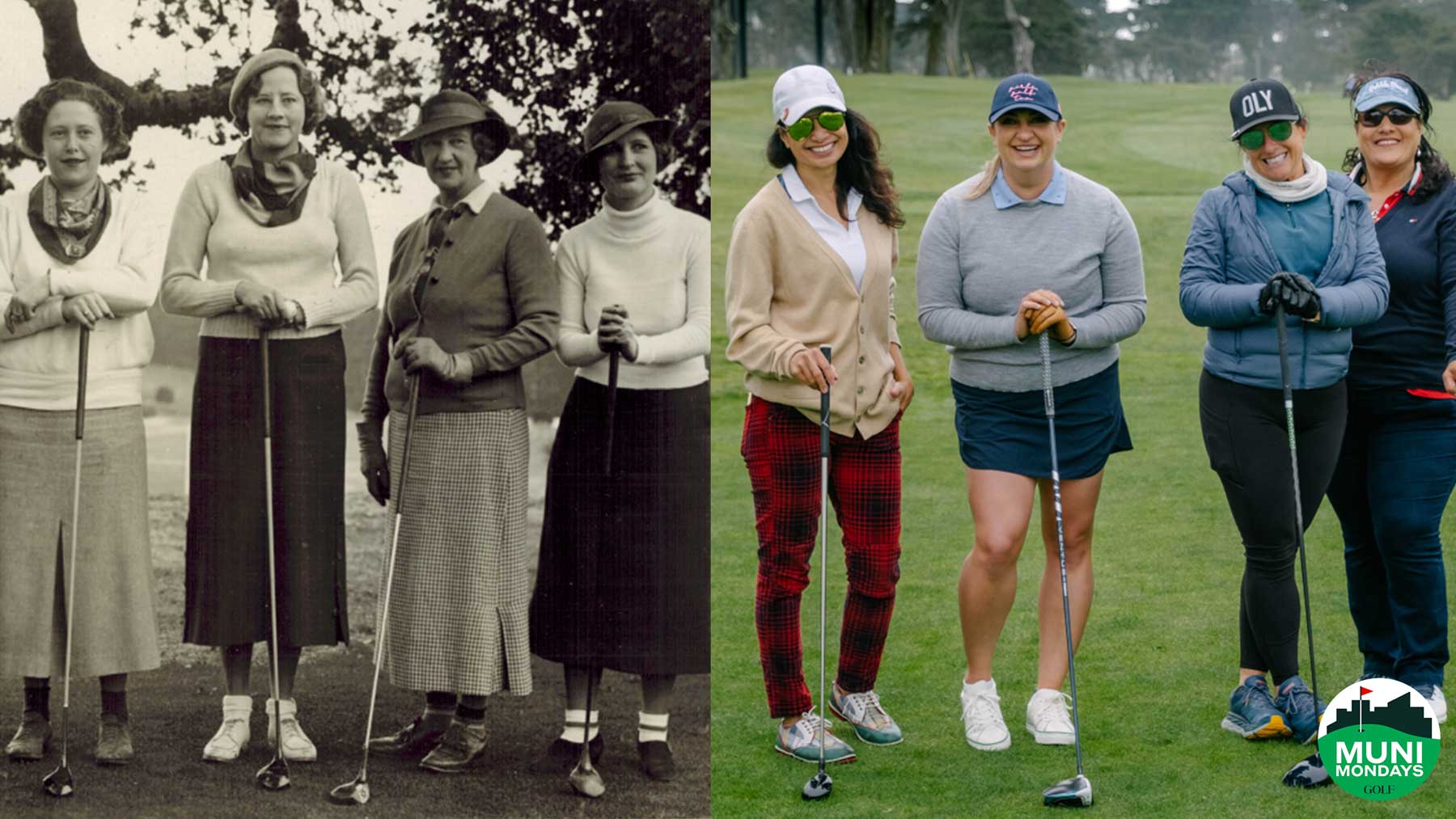 The Harding Park Women’s Golf Club, then and now.

In the photographs, the golfers wear knit blazers, full-length skirts and Panama-style caps – threads that now look retro, and no wonder.

The snapshots depict members of the Harding Park Women’s Golf Club in the early years of their organization, which was a long while ago.

Among the oldest institutions of its kind in California, the club was founded in the 1930s, shortly after Harding opened. For generations, it endured, its members keeping their appointed weekday rounds on the San Francisco muni they called home. They saw Harding through the wake of the Depression and its glory years of the post-War era when the course hosted a regular Tour stop. They continued playing through forlorn stretches in the ’80s and’ 90s, when conditions grew so scruffy, it was hard to tell the fairways from the rough.

Over time, club membership dwindled. But the group held on until the early aughts, when Harding shut down for major renovations, destined to become a tournament-worthy track once more. With the course under construction, women’s club members took to playing elsewhere. When Harding reopened, with a modest rate hike for residents, few opted to return.

In 2003, the women’s club disbanded, and for nearly 20 years, it went largely forgotten. But now, like Harding itself, it has been reborn.

Credit for its revival goes to Lily Achatz, a Bay Area native and an unlikely champion of the women’s game. Growing up in the ’80s, Achatz didn’t play golf. She first picked up a club at age 12, when her father took her to the driving range. Achatz liked it but was wary of the all-dude demographic. Golf, she figured, wasn’t quite a fit for her.

Life went on. Achatz moved to New York, graduated college, embarked on a career in the fashion business. Athletic and outdoorsy, she enjoyed a range of sports. But golf only flashed into the picture now and then, when guy friends invited her to play. Again, she felt the pull – and the hesitation.

“The courses were so beautiful, and I loved being out there,” Achatz says. “But it also seemed like such a bro society. I just thought it would be weird for me to go out alone. ”

After the attacks of Sept. 11, Achatz relocated to San Francisco, busying herself with work and friends, all the while thinking that maybe one day, someday, she’d give golf another crack. When Covid hit, her motivation reached a tipping point. Achatz booked a lesson at Presidio Golf Club, a public-access course in the heart of the city. While learning to swing, Achatz also learned that she wasn’t alone. The Presidio was home to a women’s club, players of all levels, in it for community more than competition.

Achatz signed up and – raise your hand if you could see this coming – was smitten by the fresh air, the fellowship, the challenge: the happy gateway drugs to golf addiction.

It was official. Golf became her thing.

Soon, Achatz made a wish list of other local courses. Harding was high on it, though she worried her demands might be too much. Her newfound Presidio golf friends helped her past that hurdle, skipping across town to guide her first round at the intimidating muni.

“They made me feel so comfortable,” Achatz says. “And they helped me understand that it didn’t matter what you shot, as long as you understood the etiquette.”

Around the same time, Achatz attended her first LPGA event, the Mediheal Championship, at nearby Lake Merced Golf Club. There, she crossed paths with Tom Smith, Harding’s general manager. The two got talking. When Achatz mentioned her dual interests in golf and fashion, Smith pulled up photos on his phone, black-and-white images from the 1930s that he’d first seen in a scrapbook at his workplace: portraits of members of the Harding Park Women’s Golf Club, dressed in their Babe Didrikson Zaharias-era duds.

Achatz loved the clothes. But something else was even more alluring: the idea of ​​bringing back the club.

With help from Smith and Lyn Nelson, director of golf development and property manager for San Francisco’s Recreations and Parks Department, Achatz spent the next few months pushing through the hoops to make that happen. In late 2021, the Harding Park Women’s Golf Club was reinstated, sanctioned by the city and under the umbrella of the Northern California Golf Association. This past February, Achatz opened the doors for enrollment. Overnight, 50 women signed up. Based on early feedback, Achatz projects that the number will swell to more than 100 by the end of the year.

The robust response reflects a broader trend: During golf’s recent boom, girls and women have become the fastest-growing sector of the game. It also speaks to golf’s wide demographic reach. The new club membership runs the gamut in age, background and ability, ranging from Nicole Holm, a 28-year-old former high school golfer-turned-public health researcher, to 80-year-old Jane Grimm, who works as a sculptor but knows how to shape shots, too.

“Aside from playing with my sister, I can’t recall the last time I showed up at a course and wound up playing with another female golfer,” Holm says. “That’s what makes this so special – having a community of women who love the game as much as I do.”

In the two months since its relaunch, the club has gathered regularly for nine-hole twilight rounds on Harding’s scenic back side. But Achatz and her cohort have bigger ambitions. Along with monthly 18-hole outings, plans are in the works for educational clinics; Toptracer league play; online happy-hour Q & A’s; mixed-gender events with a sibling group, the Harding Park Golf Club, which is open to all but whose active members all are men.

“We are open to all ideas,” Achatz says.

The women’s club costs $ 105 a year to join, and another $ 49 to establish and maintain an official handicap. Not that scorekeeping is required. Members compete mostly against themselves. The group currency is camaraderie. Post-round cocktails are valued, too.

Like the abiding spirit, the dress code is relaxed, though retro threads might earn you style points. It is, after all, an historic club, updated, where everything old is new again.

A golf, food and travel writer, Josh Sens has been a GOLF Magazine contributor since 2004 and now contributes across all of GOLF’s platforms. His work has been anthologized in The Best American Sportswriting. He is also the co-author, with Sammy Hagar, of Are We Having Any Fun Yet: the Cooking and Partying Handbook.